Political Scientist Finds That UN Does Its Job Preventing War

Political Scientist Finds That UN Does Its Job Preventing War 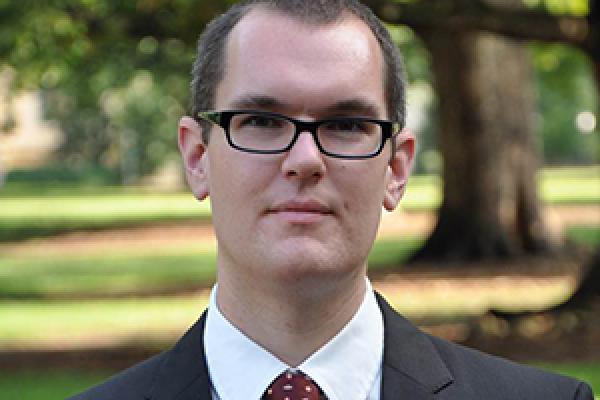 Skyler Cranmer, the Carter Phillips and Sue Henry Associate Professor of Political Science and affiliate of Ohio State Discovery Themes' Translational Data Analytics, is co-author of a new study finding that the U.N. acts more than just a bystander to world events. Instead, Cranmer and collaborator Scott Pauls, professor of mathematics at Dartmouth College, found that the U.N. “provides a forum where diplomacy reduces the chance of war."

The study appears in the journal Physica A: Statistical Mechanics and its Applications. Their study is the first to present evidence that U.N. voting coalitions improve chance for peace and defensive alliances, not democratization.

In addition to analyzing the U.N.’s effectiveness at preventing war, Cranmer and Pauls also used General Assembly voting records for more than 65 years to assess the organization’s impact on the spread of democracy and the building of defensive alliances. The review of 5,143 U.N. General Assembly voting records from 1946 through 2011 found that the process of nations working together over time builds trust and facilitates fast, transparent communication that raises the chance of resolving crises peacefully.

“There is more nuance in voting records than was previously thought,” said Cranmer. “The evidence demonstrates that the U.N. is more effective at achieving its mandate of avoiding wars than many experts think.”

The research assesses the priorities that shape state actions as opposed to treating voting records as a reflection of those priorities. Until now, existing research on the U.N. mostly considered voting patterns descriptively or addressed the impact of factors like foreign aid contributions on member voting.

From the voting records, Cranmer and Pauls identified historic voting alliances — “affinity communities” — consisting of long-term macro-clusters and short-term micro-clusters, which provide the basis for coalition-building and cooperation.

Macro-clusters named in the research are the more enduring U.N. voting communities. One macro-cluster identified is comprised of the U.N.’s Western European and Others Group as well as Russia, Japan, China and some Eastern European countries. The second, much larger group, comprises the balance of U.N. members.

According to the study, there have been 15 times in the U.N.’s history when the two macro-clusters have merged into a voting community including all but a few states. In most of these instances, the U.S. and a small number of other countries formed a group separated from the rest of the world as a result of divisive votes on issues like the Middle East and human rights, the authors said.

Micro-clusters are more volatile voting alliances that form and dissolve in response to faster moving political dynamics. The high level of voting agreement within micro-clusters translates into the largest degree of conflict suppression.

“It is through this mechanism of intensified diplomatic interaction that the UN has historically been able to better achieve its primary goal of maintaining international peace and security,” said Cranmer.

Cranmer's research is focused on network science, political methodology and the application of quantitative methods to the study of political, social and policy problems. He is interested in the role of topology in modeling complex networks and forecasting their evolution. He teaches Inferential Network Analysis, Linear and Generalized Linear Models, Defense Policy and National Security (honors), and Data Visualization.