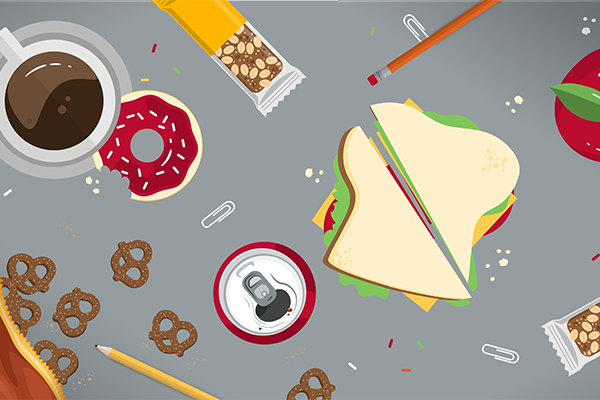 Ever want to sit down and chat with one of your favorite instructors over lunch or coffee? With the Take Your Professor to Lunch and Coffee Connections programs, undergraduate students in the College of Arts and Sciences have opportunities to get to know their professors outside the classroom, taking informal conversations in more directions than office hours or a quick talk after class can offer.

If a student wants to ask about educational or research opportunities, career paths, or just break down the divisions of a student-teacher bond, instructors are usually willing to dedicate this extra time.

With the Take Your Professor to Lunch Program, a student can grab a bite to eat with an Arts and Sciences professor, and invite up to two more students to join, once per semester.

Meanwhile, Coffee Connections, which launched during the COVID-19 pandemic and offers virtual and in-person options, allows students to chat over coffee with a professor twice a semester. Both programs provide a small monetary incentive through a Dining Dollars meal card or $5 digital Starbucks card, depending on which program the student chooses, for each approved participant.

We caught up with a few students and professors who grabbed either lunch or coffee, and here is what they had to say. 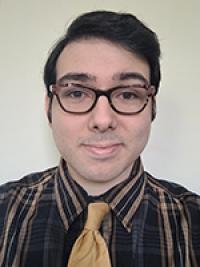 It had always been important for Michael Caruso to get to know his professors on a deeper level than what a classroom provided. He was accustomed to Columbus State Community College’s quaint Delaware campus — where bumping into professors and chatting with them in the hallways was a daily occurrence.

So when Caruso transferred to Ohio State, he was worried he’d be just another student in a lecture hall.

“Having a one-to-one kind of relationship with professors has always been important to me,” said Caruso, who graduated with a degree in strategic communication in December 2021. “At the end of the day, we’re all human, and we have personal lives. It’s cool to be able to get to know them and have a more personal connection.”

Shortly after arriving, Caruso learned about the Take Your Professor to Lunch program. For Caruso, it was a perfect way to forge a stronger connection with a lecturer he’d come to admire: Elizabeth Hewitt, a professor in the Department of English.

As they sat down for lunch at Sloopy’s — Caruso with a stack of brioche French toast and Hewitt with a breakfast spread of hash browns, biscuits and eggs — they chatted about their backgrounds, interests and aspirations. Caruso talked about how close he is with his family, how his uncles played football for Ohio State and how his time at Columbus State fostered a love for marketing and public speaking. He learned a little more about Hewitt’s background and how she came to become a professor. After learning more about each other, Caruso was inspired to add a minor in professional writing.

“Getting to know professors was really important to me, and I’m fortunate I was able to have this program to be able to do that at a campus as large as Ohio State’s,” Caruso said. “I’m forever grateful for the opportunities I’ve had to connect with so many amazing professors here.” 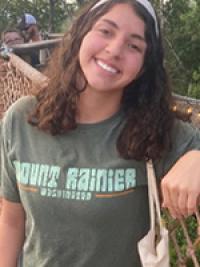 Since Sydney Trem, a junior studying history, participates in the Integrated Social Studies Program in the Department of History, she registered for Professor Kendra McSweeney’s “Our Global Environment” geography course last fall semester.

It didn’t take long for Trem to fall in love with the course because of how engaging and interesting McSweeney kept the lectures. Trem and two of her friends in the class could be found talking with McSweeney after lectures and in office hours, but they were curious to learn more about her beyond what’s often discussed in those settings.

The Take Your Professor to Lunch Program offered the perfect opportunity for all three students to grab a bite with her at Woody’s Tavern. Trem recalls each student sharing more about their classes, campus jobs, hometowns and high school experience during the lunch with McSweeney.

“It was really nice because we could talk more about our personal lives and get to know each other,” Trem said. “There was always something to talk about.”

Even though Trem’s career plans don’t involve geography, McSweeney connected her with faculty in the Department of History, sparking an idea for a research project about the Italian mafia’s influence in Trem’s hometown of Cleveland.

“She’s very passionate about undergraduate research opportunities,” Trem said. “She wants students to succeed and take advantage of all of the opportunities that Ohio State has.”

Since sitting down with McSweeney, Trem has already recommended the Take Your Professor to Lunch program to students she supervises as a resident advisor. She’s also thought about who she might ask to participate in the program next.

“This made me realize that most professors want to get to know their students, so it’s not really as scary as it may seem,” she said.

Since launching during the COVID-19 pandemic with virtual and in-person options, the Coffee Connections program interested Apostol Kule as a way to bond with his instructors during his first semester on campus. He took full advantage of the program by sending separate invitations for coffee and a chat at Starbucks to John Parquette, a professor in the Department of Chemistry and Biochemistry, and Anita Bucknam, senior lecturer of international studies.

“I had gone to their office hours before and they’re fairly easy to talk to so that’s why I chose them,” said Kule, a sophomore studying biochemistry.

Kule appreciated the opportunity to speak with both instructors less about the courses that brought them together and more about their unique research interests and job experiences. Parquette’s research on dental materials and catalysis may have related more to Kule’s major and professional interests, but it was fascinating for him to learn about Bucknam’s time as a CIA officer, too.

With these two informal meetings, Kule was participating in the Coffee Connections Program for the first time and had wanted to find instructors that could possibly write him a letter of recommendation for dental school. But after taking care of more immediate academic goals, Kule hopes to have casual conversations with faculty and staff through the program.

“Professors are an untapped resource, and if you’re paying for tuition you might as well get to know your professors,” he said. “Even if they can’t help you, they’ll recommend a resource that can help you.” 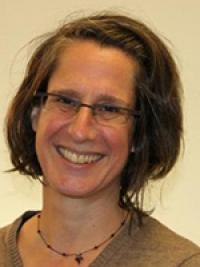 For Elizabeth Hewitt, professor in the Department of English, Ohio State is an extraordinary place. Its only potential disadvantage? Its size. Though the scope of the university allows for plenty of opportunities, some can be intimidated by just how much there is to take in.

But with programs like Take Your Professor to Lunch, everything seems to shrink, simplify and become a little bit more manageable.

“Students sometimes don’t have a lot of close encounters with faculty,” Hewitt said. “Part of the beauty of the university experience is just getting to talk with people about ideas, education, scholarship and life. Thinking back to my own college life, one of the things I remember most was close interactions with my professors. I think that’s really important, and it’s part of the reason why I became a professor.”

Lecture halls and classrooms are filled with dozens of students — all there to learn. It can sometimes be difficult for instructors to differentiate students from one another. And in a new age of remote learning — where students are made up of rows of boxes on a screen — that mindset becomes harder to overcome.

“The idea of individualizing them is so important,” Hewitt said. “I have so many great students. But you realize when you talk to them that they’ve got so much else going on. There’s a kind of myopia that faculty have where we think students are really only in our class, when we know that’s not the case. When you talk to students one-on-one and they tell you about all the other things going on in their lives, you really are brought front and center.”

Hewitt has participated in the Take Your Professor to Lunch program twice — once with communication major Michael Caruso and another time with English major Emily Winter. Both have since graduated, but for Hewitt, the experience has lingered. Just recently, one of her students sent her a Panera gift card as a token of thanks last semester. Hewitt, inspired by her previous lunch encounters, asked that student to grab lunch with her.

“It’s so rewarding to get to speak with a student just one-on-one and learn about them,” Hewitt said. “It’s such a great program.” 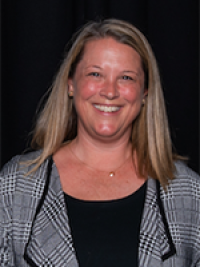 Having participated in the Take Your Professor to Lunch Program for several years, Jennifer Cheavens isn’t a newcomer to connecting with students outside of lecture halls.

Cheavens, a professor of psychology, remembers the first time a student asked her to participate in the program: “I was really flattered. It’s a nice gesture on the student’s part. I was excited to get to know them outside of the classroom, to get to know them better.”

From that point on, it seemed every semester a student in her “Positive Psychology” class would hear about the lunch program, invite Cheavens and email the entire class to see if anyone else wanted to join. Usually, Cheavens would end up meeting a group of students at the dining hall in the Recreation and Physical Activity Center (RPAC) or Sloopy’s.

“Having a conversation with somebody for a whole meal, it’s like a first date in some ways, so having other people there can make the whole experience less intimidating and make people feel more at ease,” Cheavens said.

The students are often curious about how she became a clinical psychologist, and she’ll ask what they plan to pursue after college. However, Cheavens most loves to hear about the students’ experiences in the psychology major and where the Department of Psychology can improve. When students share their favorite courses, that can inspire others in the group to consider it, or another course by the same instructor, for future semesters.

Cheavens has also met with students one on one through the Take Your Professor to Lunch Program, which has led to better addressing topics such as mental health issues or getting specific advice about attending graduate school.

The program’s influence on Cheavens extended to such a level that she added a similar spin to some of her office hours before the COVID-19 pandemic. With Chat & Chew, Cheavens would eat lunch in the Union cafeteria and students could join her. She wanted to give students this informal option of conversing because it may be less intimidating than speaking in her office. Once safety precautions allow, she plans to restart Chat & Chew.

“We’re interested in working with bright and interested and curious young adults and so it’s a really nice opportunity to get to see inside the lives of students from a different lens,” Cheavens said.