Lanier Holt is an associate professor in the School of Communication. His area of expertise involves examining the social and psychological effects media have on the public’s perception of African Americans, women and other traditionally marginalized groups. He earned a BA in African American and African studies with a minor in political science from the University of Minnesota, and he earned an MA in journalism and a PhD in mass communication from Indiana University.

Describe your current research or area of interest

Very little of what people know about the world today comes from firsthand experience. Often people learn about issues, individuals and even racial groups first through the media, which helps frame and influence their perception of issues, people and racial groups, often well before they meet them in real life.

To put what I do in layman’s terms, I examine the effect media messages have on the public’s perceptions of African Americans, women and other traditionally marginalized groups, examine why they feel that way and ideally test to see what, if anything, needs or can be done to change these attitudes and beliefs.

What undergraduate classes do you teach? Why would you encourage students to take these classes, and how might they be of interest to students majoring in other disciplines?

Students should take my classes because they are a mix of theory and the practical. I was a newspaper reporter at some high-level places and worked in communications for a Fortune 500 company, and I bring those experiences to a high-level educational institution, which is The Ohio State University.

I try to infuse humor because if you’re not having fun while learning, why do it? It can get real stale real quick. Also, from a practical standpoint, I usually use scholarly and popular culture articles rather than textbooks in my classes. I’m the son of a factory worker and a Head Start teacher; school is expensive. I’m not going to burden students to pay $100 or $200 in textbooks from which I’m only going to use a quarter, force them to pay full price, then hear they received only a tenth of that back when they try to sell it. I hated that when I was in school, and I will not promulgate that now as a professor.

What aspects of your teaching give you the most satisfaction?

It’s very cliché, but seeing students take what they learn and apply it outside of the classroom. My favorite stuff actually happens after class when students tell me, “Oh I saw this on the news, and it is EXACTLY what we were talking about.” Or in the summer or over winter break when they reach out to me via email or social media and say, “I saw a company mess this up in a press conference. They should’ve taken your class! How did they not know!” That is my favorite thing. When they apply it, they’re thinking like professionals; they have taken control over their learning, and they’re ready to make a difference.

What book or movie would you recommend, or what music do you enjoy?

My favorite book is The Autobiography of Malcolm X. It is the most transformative book I have ever read, and it also shows the ascent a human can make in life with drive, guidance and self-belief.

As far as movies, I’m big into sci-fi movies, especially disaster flicks. I generally don’t watch many movies where a thousand people aren’t blown up at one time, or at least those are not the ones I watch multiple times. I do like an “Antwone Fisher,” “Finding Forrester” and “Hidden Figures” — movies about overcoming obstacles as well.

As for music — believe it or not, I’m mostly into pop and alternative. I mainly listened to rap in the 1990s, the golden era of the genre, but if I go back and listen to music from back in the day, it’s ’80s alternative: New Order (especially), Depeche Mode, Pet Shop Boys, etc.

What is the most interesting place you’ve visited, who has inspired you and/or would you like to share your reflections on an event that influenced you?

I’ve never really been to any particular place I’ve found inspiring. I haven’t been to Africa. I’d like to see from where my ancestors were brutally ripped, never to return; that would be deep and personal. In general, I go to places to relax. My all-time favorite places are anywhere in Hawaii and the northern shores of Minnesota along Lake Superior.

The most inspirational people are mostly my elementary and middle school teachers. My favorite teacher though, is and will always be my mom. She’d work eight hours with other people’s children in Head Start then come home and help me with my homework while making dinner. My Pops was also amazingly inspirational. He sacrificed his body over the course of 30 years in a factory so I wouldn’t spend one day there. I live near the East Side of Columbus. Sometimes I ride in to work past the factories just so I can feel closer to him now that he and Mom are no longer here. It reminds me of home.

What is the best advice you’ve received?

“It’s best to err on the side of compassion than cruelty.” My brother, working as a paralegal, said he heard that from an attorney, and it has always stuck with me.

What advice would you give to undergraduate students?

When I was 25 years old, I was working at the corporate headquarters of a Fortune 500 company, had my own apartment in Uptown in Minneapolis, would later work for our aerospace business unit and do several other things. If you’re as good as I was when you are that age, I’ve failed you. You’re supposed to be better than me. You’re supposed to take what I’ve learned and improve upon it.

When you encourage students to stop by your office hours, what do you most love talking about?

It’s always their career. College is about getting them in a position to have better opportunities than they could have had they not come to Ohio State. It’s always, “what’s next.”

I watch “Jeopardy!” almost every night. If you don’t take away for when I get ones wrong, I generally get at least 20 right every night before I fall asleep. I also watch astronomy programs excessively. I think I’ve seen every episode of “How the Universe Works.” I’m also red-green colorblind, so I can’t mix and match clothes. Until I got married, if I ruined a shirt, the whole outfit (shirt, tie and pants) went to the Goodwill, as I could never re-match it with anything.

I don’t know if you knew this, but I was recently named the top communications educator in higher education in the country by the National Communication Association, the largest academic group in my field. I picked up the award Nov. 20 in Seattle! 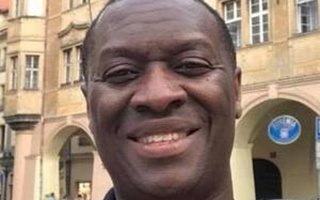