Linda Mizejewski is a professor in the Department of Women’s, Gender and Sexuality Studies. She specializes in feminist media studies and is the author of five books about women in popular culture, including Pretty Funny: Women Comedians and Body Politics. She is also co-editor of Hysterical, an anthology on women and comedy, and of Our Blessed Rebel Queen: Essays on Carrie Fisher and Princess Leia. Her book on the television series “The Americans” is forthcoming in the TV Milestones Series from Wayne State University Press. At Ohio State, Mizejewski has won the Alumni Distinguished Teaching Award and the Harlan Hatcher Distinguished Faculty Award. She was recently named a Distinguished Professor in the College of Arts and Sciences.

Describe your current research or area of interest

I do research on women in film, television and other media. I’m interested in how popular culture influences and is influenced by our ideas of gender, race and class. Women’s comedy has become more prevalent over the past decade, so I’ve been fascinated by how feminist issues have played out in comedians’ materials and topics. Laughter opens us up, energizes us and brings us together. Of course, we know this works both ways: sexist, racist and homophobic humor is effective precisely because it’s a powerful way to bond a dominant group. But humor also has a long history of expression for marginalized populations; Black and Jewish comedy traditions are central to American humor.

My recent research focuses on how comedy works as a bonding device to get audiences to laugh at sexism and racism, as you can see in the comedy of Wanda Sykes, Margaret Cho, Amy Schumer and others. Comedy was also the entry into my work on Carrie Fisher; I was intrigued by her comic feminist writing about her Princess Leia character, and this developed into an anthology about Fisher and her alter-ego princess.

What undergraduate classes do you teach? Why would you encourage students to take these classes, and how might they be of interest to students majoring in other disciplines?

I teach two film classes and a course on addiction. One of the film courses, “WGSS 2317: Gender at the Movies,” is a GE course, and the other, “WGSS 4527: Studies in Gender and Cinema,” is an advanced course, which I alternate between the topics “Women in the Horror Film” and “Women in Film Comedy.” Students enjoy the opportunity to do some critical thinking about films they’ve loved (“Hairspray,” “Halloween”) and also to see some films they otherwise wouldn’t have watched (“Tangerine,” “Babadook”). These courses draw from students from all over the university because pop culture is everywhere in our lives, so it’s relevant no matter what you’re studying.

My other course, “WGSS 2326S: Feminist Perspectives on Addiction,” is a service-learning course in which students work with high schools in the Columbus neighborhoods hit hardest by the opioid epidemic. Ohio State students have found this work really rewarding, and each time I’ve taught it, at least one student has discovered a calling and switched majors to secondary education.

What aspects of your teaching give you the most satisfaction?

In my film classes, I love when students make discoveries by seeing familiar films in a new light or seeing new ways of looking at pop culture. Over and over, I hear comments like, “I’ll never watch a movie the same way again.”

The service-learning course is a very different kind of satisfaction for me. Addiction isn’t a research topic, but part of my personal story. I’m 25 years sober, and my sobriety is a joy that animates my entire life. So, I’m thrilled to be able to merge my personal and academic worlds this way. In turn, the course benefits not only Ohio State students, but the high school students with whom they do peer work every week.

What book or movie would you recommend, or what music do you enjoy?

For book and film recommendations — I hope everybody has seen “Get Out” by now. Jordan Peele is a genius to use the horror genre to convey the horrors of racism. The best non-fiction book I’ve read this year is The Hemingses: An American Family, about Sally Hemings, the enslaved woman who was a mother to six children by Thomas Jefferson. Love the subtitle! For fiction, I really liked Laura Lippman’s Dream Girl, a feminist rewrite of Stephen King’s Misery.

What is the most interesting place you’ve visited, who has inspired you and/or would you like to share your reflections on an event that influenced you?

A few years ago, Anita Hill came to campus to speak, and she was simply galvanizing. She was the lawyer who made history in 1991 by speaking out about sexual harassment by then-Supreme Court nominee Clarence Thomas. Ms. Hill is the most compelling and inspiring speaker I have ever heard, and her story is all the more powerful in light of the #MeToo movement. She stunningly exemplified the importance of speaking your truth and never wavering from it.

When you encourage students to stop by your office hours, what do you most love talking about?

Feel free to stop by my office! I love to talk about movies, TV, comedy and recovery. 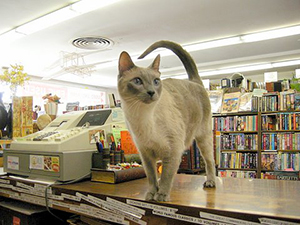 We have had two working cats in our household. Biblio, a bluepoint Siamese, was the bookstore cat at my husband’s store, The Acorn Bookshop, in Grandview. And Sika, a sealpoint Siamese, was the cat that had a Fulbright. She traveled with us to Eastern Europe for a year when I was a lecturer of American literature there.