Raising awareness for the linguistic needs of heritage speakers

Taisse Torres-Lorenzo was 9 when her and her family moved from Puerto Rico to Florida.

“I was thrown into class and was told to just learn English, or I would fail,” said Torres-Lorenzo, now a second-year student double majoring in psychology and Portuguese. “I wanted to do well in school, so I learned English.”

“They grow up speaking the language of their parents or their family, but a lot of times, the language is spoken or learned orally and a little more informal, and there is very limited instruction in that language,” said Elena Foulis, senior lecturer in the Department of Spanish and Portuguese. “There is an increased interest in teaching and developing courses that are specific to heritage learners.”

In response to this interest, the Center for Languages, Literatures and Cultures (CLLC) is hosting the inaugural Heritage Language Summit on Dec. 9 and 10. The two-day event encourages Ohio educators to develop their ability to understand, appreciate and share the stories and experiences of Ohioans who grew up speaking minority languages in addition to English. The summit will include various workshops, speakers and panels through which participants will learn how to meet the linguistic needs of heritage learners and hear from employers about the benefits of hiring heritage learners.

“We want to bring more information about who our heritage learners are, what they bring to the classroom and how to support them,” said Foulis, who is speaking about heritage learning curriculum and project-based learning at the summit. “When we have heritage language learners in the classroom, this is not a second language for them. This is a language that may not be fully developed, but it’s not a new language they’re learning. It’s a language they grew up speaking and listening to. We know there’s a difference, and we want to acknowledge that and bring it as an added value to our classes.”

When Torres-Lorenzo first arrived on campus, she was by herself. Florida and Puerto Rico were all she’d really known. Though she was a member of ROTC, which she says was great for meeting people and making connections, she wanted to find a community of Spanish speakers to share her experiences with and learn from.

Torres-Lorenzo found a student job in the Department of Spanish and Portuguese. When Foulis encouraged Torres-Lorenzo to take her course, Spanish for Heritage Speakers, she found the group she’d been looking for. Now, Torres-Lorenzo has a group she converses, reads and texts with — all in Spanish.

“It’s important to keep that going, to hone that skill rather than just let it deteriorate,” said Torres-Lorenzo, who wants to pursue a career as a psychologist in the Navy. “That’s really a big thing about being a heritage speaker because you love your language, and it’s still intertwined with your culture and with your community. When you start to lose it a little bit, it’s nice to have someone else as a heritage speaker to [engage with].” 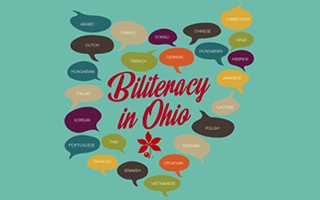