Home / News & Events / College News / Slavery and its legacies: Remembering 1619 and Beyond

Slavery and its legacies: Remembering 1619 and Beyond 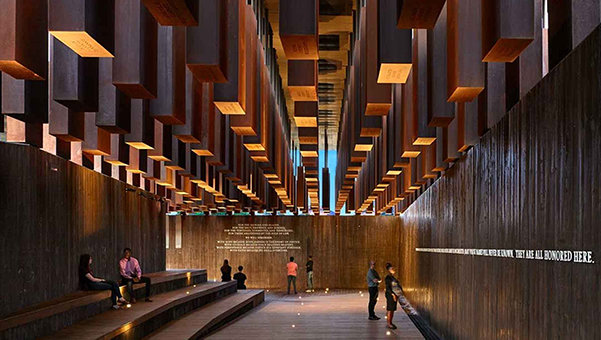 The National Memorial for Peace and Justice, pictured above, is the nation’s first memorial dedicated to the legacies of slavery. (Photo courtesy of the Equal Justice Initiative)

The ship White Lion’s arrival at Chesapeake Bay in 1619 was a monumental moment for American history long before the United States became an independent nation. Aboard the ship were “twenty and odd” Angolans, some of whom were sold into slavery at Jamestown, marking the beginning of an era that still has profound legacies in modern America.

To commemorate the 400th anniversary of slavery’s introduction to the U.S., the Department of History launched a lecture series last year called “1619 and Beyond: Explorations in Atlantic Slavery and its American Legacy.” The three-year project continues this fall and is one of the largest and most extensive of such university programs in the country.

One of Scott Levi’s main priorities since he became chair of the Department of History has been to bolster the department’s African American history program and take a leading role in thinking about slavery’s impacts throughout the past few centuries.

“I wanted us to make a bold statement, a bold move, in getting in front of the history of the Atlantic slave trade and its legacy in making modern America,” Levi said.

His idea for 1619 and Beyond was first inspired by a conversation with James Moore, vice provost for diversity and inclusion and chief diversity officer. But for it to come to fruition, he asked Stephanie Shaw, professor of history, and John Brooke, Arts and Sciences Distinguished Professor of History and director of the Center for Historical Research, to co-chair an advisory committee for the project.

“It’s really important that people know the legacies go way beyond slavery,” Shaw said. “You see the legacies of slavery certainly during the slavery era itself, but they persist and are equally vivid after slavery ends.” 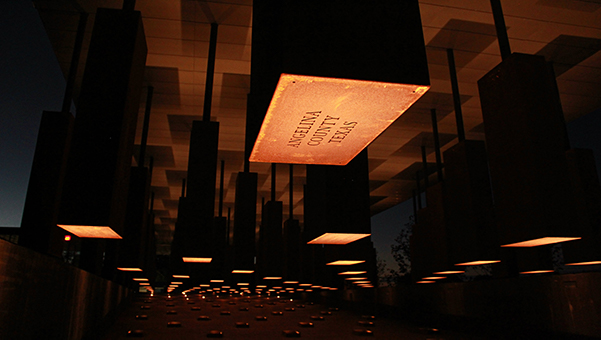 Part of the National Memorial for Peace and Justice is the memorial square, which includes over 800 steel monuments representing each county in the U.S. where a racial terror lynching took place, symoblizing thousands of victims. (Equal Justice Initiative)

The program started last year by focusing on slavery-era discussions. This year, with the help of new co-chair and associate professor of history Hasan Jeffries, the series is moving beyond emancipation to look at the Jim Crow era this autumn and continue on to the civil rights movement in the spring.

Its next event, "Slaves of the State: Black Women and Prison Labor in the Post-Civil War South," will welcome Talitha LeFlouria, the Lisa Smith Discovery Associate Professor in African and African-American Studies at the University of Virginia, on Oct. 9.

During the Jim Crow era, Black people were barred from many of the basic things that were supposed to come with citizenship like voting, getting jobs for which one was qualified or living wherever one wanted and could afford to live. Shaw says restrictions in these and other areas were a way of maintaining dominance over African Americans even though they were no longer slaves. Legal slavery might have ended with emancipation, she said, but the subjugation and oppression continued through other means.

“I hope people who come to our events are inspired to read more and to think more and to think more critically,” Shaw said. “I also hope it helps them connect what’s going on today with a real history and a real context that helps them see how things that seem coincidental are instead part of a concerted effort that has gone on for generations. It’s not all of American history, but it’s an important part of it, and you can see it operating from the very founding of this nation.”

The response to 1619 and Beyond has been “extraordinary,” Levi said. High-profile efforts like the New York Times’ 1619 Project made people hungry for more knowledge and a deeper understanding of African American history. Students, faculty and community members filled lecture halls. And although the coronavirus at first stalled programming in March, the transition to a virtual setting has enabled 1619 and Beyond to welcome people not just from around central Ohio, but across the country.

“We sometimes underestimate not just the interests of people but also that quest, that thirst that people have to learn more, and I think the Black Lives Matter movement has caused people to look for outlets that are providing information they believe they can trust, and universities have been a big part of that,” Shaw said.

Levi hopes 1619 and Beyond provides people with the reliable information they want and helps create an informed citizenry in Ohio and more widely. Adding an honest, clear voice to these national conversations is the principal motivation behind the program, and that commitment will continue into the future, Levi said.

“A lot of people are still trying to sort it out, and God bless them for trying,” Shaw said. “It’s important to provide as much access as you can to knowledge, to good information, and that’s what we’re trying to do in this series — give people a really good lesson on various topics but also open a door for them to continue to pursue information on these various topics if they have an interest.”