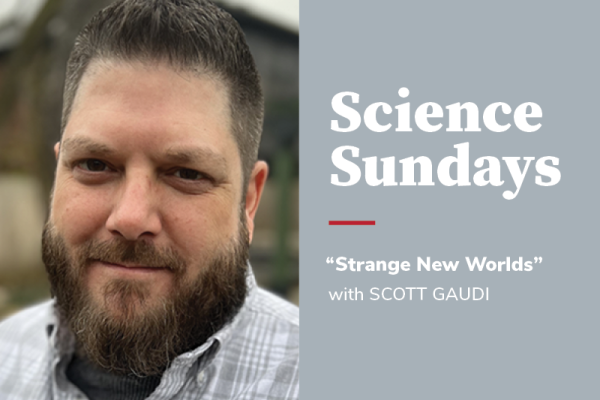 The “Science Sundays” lecture series returns to The Ohio State University for its 10th year on Sunday, Jan. 22 with a discussion of the search for strange new worlds that lie beyond the reaches of our solar system.

In the opening lecture of this year’s series, Dr. B. Scott Gaudi, Thomas Jefferson Professor for Discovery and Space Exploration in Ohio State’s Department of Astronomy, will give a primer on the search for and classification of exoplanets – a guided tour of some of the more interesting discoveries that he and scientists like him have made in the field.

Since joining the Department of Astronomy in 2006, Gaudi’s research has led to the discovery of more-than 100 exoplanets.  “These strange new worlds are as myriad and diverse as people, each with its own unique personality,” Gaudi said. “Also like people, many of these worlds are both unexpected and difficult to understand.”

Gaudi was among the first lecturers to participate in the “Science Sundays” lecture series when it began in 2011.

John Beacom – Distinguished Professor of Physics and of Astronomy, Henry L. Cox Professor of Physics and of Astronomy and Director of the Center for Cosmology and AstroParticle Physics (CCAPP) – is Chair of the “Science Sundays” Organizing Committee. He says that one of the primary goals of the lecture series is to stimulate and enhance the human imagination for a community of life-long learners.

“One of the fundamental experiences of being human is curiosity – whether or not it has an impact on your everyday life,” says Beacom. “We’re trying to share the benefits of being a large research institution with the public to give them access to the fruits of those endeavors.”

Beacom adds that the lectures are crafted for all ages, “from kids to retirees,” but inspiring future generations of scientists is one of the series’ most important goals. “I think this is exciting for people for all ages, but especially important for pre-college and college-aged students. It’s hard to know whether science is something you want to do as a career if you haven’t had a chance to meet scientists.”

Gaudi’s talk will be the first in-person lecture of the “Science Sundays” series since March 2020. While the committee held a virtual lecture in April 2020, Beacom says holding the talk online necessarily excluded one of the most important aspects of “Science Sundays”: the reception held after the hour-long talk. “One of the special things [about “Science Sundays”] is the opportunity to have a dialogue with scientists who are leaders in their field. That’s what makes this different from watching a special on TV – you actually get to talk to a scientist, yourself.”

The pause in programming has also presented a unique opportunity to the organizing committee. “Before we went on hiatus, we had lists of good ideas for future talks,” says Beacom. “One of the really exciting things about coming back is that so many, completely different topics have come to the forefront, just in that time.”

While “Science Sundays” originally focused on the natural and mathematical sciences, Beacom says organizers have since worked to include a more-diverse range of topics in the discussions. This semester’s lectures will also include discussions on technology and wildlife conservation, the intersection of art and technology, and the tragedy and aftermath of genocides around the globe.

Gaudi’s lecture, “Strange New Worlds,” will be held at the Ohio Union U.S. Bank Conference Theater at 3 p.m. on Jan. 22, 2023, with an informal reception to follow at 4 p.m. All "Science Sundays" lectures are free and open to the public. For more information, visit the “Science Sundays” event page.