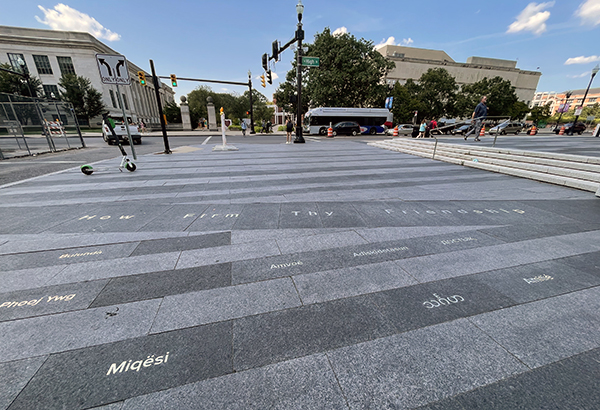 You don’t have to go far from Ohio State’s campus to get a sense of just how global Buckeye Nation really is.

Thanks to the new art exhibit at University Square on the intersection of 15th Avenue and High Street, anyone visiting the edges of campus can get a glimpse of the vast number of languages spoken by the Ohio State community.

The installation features “friendship” — a prominent word from the final line of “Carmen Ohio” — translated into 141 different languages and carved into granite stones. The research and knowledge for the translations were provided by the college’s Center for Languages, Literatures and Cultures (CLLC), which is made up of Ohio State faculty dedicated to giving students the intellectual, linguistic and cultural tools they need to succeed.

“I see it as a global gateway to the campus, and it’s also a teaching moment,” said Rebecca Bias, CLLC’s assistant director.

The project began in early 2020 when Bias was contacted by School of Music professor Tim Gerber. Gerber intended to have the entire final line of “Carmen Ohio” translated onto the stones, but Bias felt that provided too much of a linguistic challenge. Instead, they settled on “friendship,” an especially powerful word that unites the Ohio State community.

Former CLLC program coordinator Estephanie Ortiz gathered translations from all over campus. With 141 translations submitted to Ortiz in the end, the next step was verification. Common languages like Spanish, Italian or Russian may have been easy to confirm. But translations from rarer languages also poured into Ortiz’s inbox.

“If they’re going to be carved in stone, we want it to be right,” Bias said. “We can’t erase it. It will be here longer than we will.”

The CLLC got responses from people who spoke Euskera, a rare dialect of Basque spoken in France and Spain. They also saw rare Native American languages like Potawatomi, which is spoken in the Midwest. There were submissions in Egyptian hieroglyphics, Braille and American Sign Language.

The 30-40 languages taught at Ohio State in any given year were quick to verify. But the CLLC team relied plenty on the vast knowledge held by university faculty, researchers and scholars who know other languages but don’t necessarily teach them. Ortiz reached out to external sources to verify other translations from native speakers.

The translations were verified, and assistant director for technology Abhijit Varde took over. He was responsible for drawing the translations in fonts that would be easy to carve. The production company preferred sans serif fonts — those without little tails on the edges of letters — but that made things difficult.

“Not every rare language lends itself to that sort of font,” Varde said. “It was an interesting challenge to make sure they all were indeed sans serif.”

In the end, Varde taught himself how to make vector artwork, completed the drawings and sent them out for one final round of approval.

The installation was finished last month, and the plaza opened Aug. 19. The final installation features languages from every continent, every country and utilizes every letter of the Roman alphabet.

But there’s still more planned for University Square. In the future, Bias said, the university will hang panels nearby to provide an explanation for the installation. Also in the works is an augmented reality feature where people can scan individual stones with their phones to hear the translations spoken and learn more about that language. This feature could also direct people to experts on campus with knowledge about that language.

It’s that potential spark of inspiration that really excites Varde.

“The fact that this knowledge exists on campus will hopefully be appreciated by someone who visits the plaza,” he said. “If someone wants to do research in Egyptian hieroglyphics, they will see that translation on the plaza and it might spark some sense of inspiration in them. They then may ask a question to somebody: Who made this? How can I know more about this? And that person’s mind will expand.”

The CLLC would like to thank all the faculty and staff at Ohio State for their contribution to this exciting project. 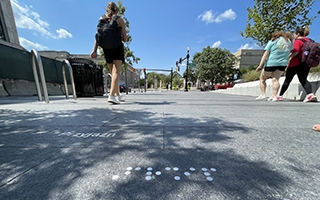