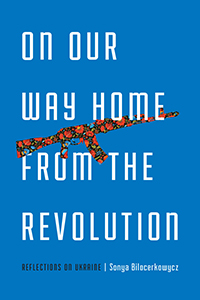 Sonya Bilocerkowycz’s imagery is vivid and profound throughout her recently published book, On Our Way Home from the Revolution.

Her Ukranian grandmother’s fried eggs, infused with a hint of onions through decades of using the same pans to wilt them. The boozy breath radiating from a former U.S. politician during a random and peculiar encounter at a South Dakota restaurant. The way black smoke spewed from a burning city bus during the 2014 Ukrainian revolution.

On Our Way Home from the Revolution is a series of essays penned by Bilocerkowycz, who earned her MFA in creative writing from Ohio State in 2017. Her pieces and narratives range from her experience in Ukraine’s capital during the country’s revolt to losing a relative in the Chernobyl disaster to political protests at the Ohio Statehouse.

But Bilocerkowycz’s first book, published by The Ohio State University Press’ Mad Creek Books imprint, doesn’t just focus on political science, history or the Ukrainian revolution. Instead, the author reflects on how historical and political events surrounding Ukraine’s past and present have impacted her.

“I care very much about these subjects,” Bilocerkowycz said. “But I’m not a political scientist, and I’m not a sociologist. I really wanted to approach these topics from a literary and personal perspective. I’m writing about Donald Trump, John Boehner, Vladimir Putin and Viktor Yanukovych and all these major figures, and I really wanted to think about how their actions resonate with me on a personal and familial level.” 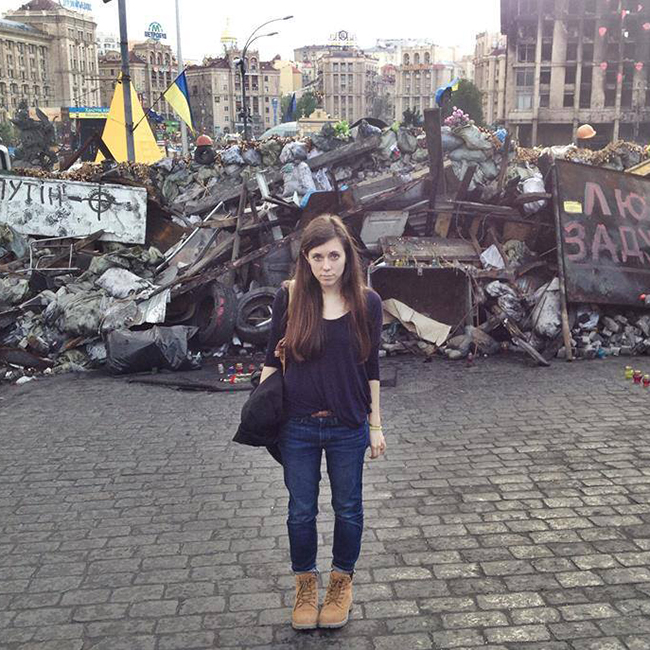 Sonya Bilocerkowycz stands in front of a barricade in Kyiv, Ukraine, in the aftermath of the Ukrainian revolution in spring 2014.

Bilocerkowycz grew up in South Dakota and earned her undergraduate degree from the University of Dayton before arriving at Ohio State in 2014. Her Ukrainian heritage is deep and poignant. Her great-grandfather, a respected elder of a small Ukrainian village, was arrested and taken away by Soviet troops during the Soviet Union’s occupation of western Ukraine in the late 1930s and early ’40s, never to be heard from again. Her grandparents met and married at a German prison camp during World War II and immigrated to the U.S. as refugees in 1949. Her father, an associate professor of political science at the University of Dayton, studies post-communist states and Ukrainian dissidents.

In On Our Way Home from the Revolution, Bilocerkowycz grapples with her family’s legacy and how she connects with it in her own experiences — all backdropped by Ukraine’s recent political turmoil.

I witnessed the Ukrainian revolution at a pretty close proximity, and when I came home from that event, I had to figure out what it meant,” she said. “What was my role? My Ukrainian family in the states, what was the impact on them? The book is this process of destabilizing some of the narrator’s assumptions she had held before the revolution about mythology and identity.”

Bilocerkowycz began her essays reflecting on Ukraine during her time at Ohio State and was aided by then-visiting professor Lina Maria Ferreira Cabeza-Vanegas, who authored her own book of essays exploring her family history, Don’t Come Back, specializes in creative nonfiction and now teaches at the University of Chicago. When Bilocerkowycz neared graduation, she realized her pieces formed a natural narrative arc that she shaped into her book.

The interdisciplinary MFA creative writing program pushed Bilocerkowycz to broaden her literary voice and experiment with different writing styles. She took classes in both the Department of English and the Department of Slavic and East European Languages and Cultures, presented at the Midwest Slavic Conference hosted by the Center for Slavic and East European Studies, and took advantage of the Arts and Sciences’ wealth of resources to hone her writing.

“The MFA program invites its students to take courses in multiple genres,” Bilocerkowycz said. “Having that flexibility and being encouraged by the program to explore really strengthened my nonfiction writing.”

After her time at Ohio State, Bilocerkowycz was granted a one-year fellowship at Seattle Pacific University, where she taught creative writing and conducted archival research to learn more about her great-grandfather.

“It filled in a gap in the narrative in terms of the narrator looking back on her family history, thinking about what version of history she’s been told and what version of the story the Soviet archives were telling, and thinking about ways to reconcile those differences,” she said. “That ended up being, in a way, the heart of the book — this idea that we’re all raised among different mythologies with different national identities.”

Bilocerkowycz is currently a lecturer of creative nonfiction at SUNY Geneseo in New York, and she recently finished a local book tour promoting On Our Way Home from the Revolution, which is available now and can be purchased from The Ohio State University Press website.

“I hope readers will be empowered to consider the ways politics and history merge in their own lives and in their own families,” she said. “Hopefully it empowers them to explore some of those phenomena through writing.” 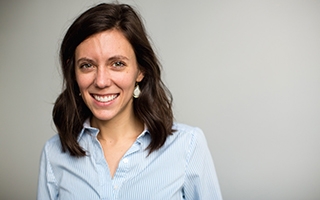