Ohio State forward E.J. Liddell played stellar basketball for the Buckeyes during the month of March. But in one crucial moment of an NCAA Tournament game, he missed a free throw, and Ohio State’s season came to an end.

Liddell, who majors in journalism in the School of Communication, was flooded with hatred on social media after the game, and he shared some of those messages — including death threats and homophobic comments — on Twitter so the public could see what he was facing.

Stacy Wray saw the social media messages Liddell shared and was disgusted. It wasn’t the first time she had seen student-athletes face harassment online based on their performances in games. Wray, whose older son Max played offensive line on the Ohio State football team and whose younger son Jake plays at the University of Colorado, knew something had to be done about this torrent of over-the-top fan hatred.

“No matter how much we love our team and school and our mascots and we love to win, we have to remember these are human lives playing this game,” Wray said. “They each have a story and a life to live. They’re students. They’re doing community service work. There’s more to them than just the game they play.”

Wray and other mothers from Life Over Logo will be a part of a town hall event on Oct. 29 hosted by the Sports and Society Initiative (SSI) at the Ohio Union. The event, part of SSI’s “Intersectionality of Change” series, will feature discussions with counseling psychologists from the Wexner Medical Center and social media experts along with leaders from Life Over Logo.

Registration for the event is free, and people can attend in person or over Zoom.

Life Over Logo was only founded recently, but the organization’s goal of supporting student-athletes has been brewing for a while. The group’s leaders have seen what negative social media attention can do to their children, who play college sports at multiple universities across the country and at various levels of the NCAA structure.

With all of the attention focused on winning, Wray wants to make sure students get the same level of attention for their off-the-court mental health and wants to humanize them as more than just statistics in a box score.

“We help them get in shape and help them with their diet and in team meetings, but when they come home after a game and they go on social media, how are we supporting them then?” Wray said. “These are not just gladiators. These are student-athletes doing a lot with their lives. One missed field goal as the worth of their value on the planet is terrible. We’re wanting to focus on things they do off the field.”

In this early stage of the organization, Wray is hoping to start conversations. But long-term, she hopes other campuses join in the conversation with town halls and that athletic departments can establish lessons or seminars to teach student-athletes how to handle negative attention they receive online. 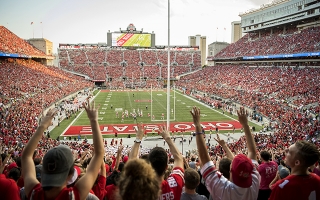