A new play based on a Yiddish theatre classic will take the stage this weekend at Ohio State.

“Leah and the Dybbuk” explores and deconstructs the early 20th century play and ghost story “The Dybbuk” by Russian-Jewish scholar S. Ansky, which chronicles a young woman who is being forced to marry against her will and becomes possessed by the spirit of her dead love. The story is the source for the 1937 film of the same name, as well as the 1959 Tony-nominated play “The Tenth Man.” 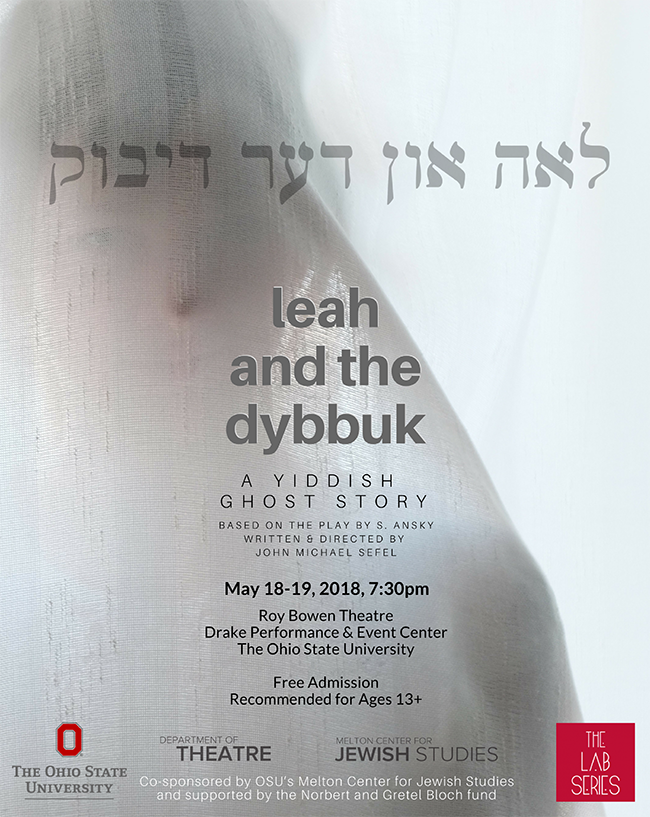 The new adaptation is the work of Ohio State graduate student John Michael Sefel, who is pursuing both a PhD in Theatre and an MA in Yiddish Studies. His play is an attempt to explore staging century-old Jewish texts for contemporary, non-Jewish audiences, he said.

“While I don’t want to fall into the trap of calling it ‘universal,’ much of Ansky’s play does feel strikingly familiar,” Sefel said. “From the Romeo and Juliet-style plot to the Faust-like mysticism … over and over I’ve had non-Jewish peers comment on how familiar, accessible and exciting the play feels.”

One challenge Sefel said he faced was portraying the highly gender-segregated and patriarchal society of 19th century shtelekh (small, predominantly Jewish towns in Eastern Europe) in a way that still allows a contemporary audience to connect to the characters.

“It’s important to remember that Ansky wrote his play during a time of great change in the Jewish community,” Sefel said.

Just like Ansky’s play, this production seeks to find the humanity in these characters, while not giving their social confines a free pass.”

One of the ways Sefel dealt with questions of gender was through casting.

“We have an almost entirely female cast,” Sefel said. “If a female actress steps forward and ‘acts like a man,’ it has the potential to ask what role gender plays in their decisions far more clearly than if a man had done the same, simply due to audience expectations of behavior and body language.”

And that isn’t the only question about gender rules and customs that the play interrogates.

“Many have suggested that Ansky’s original work had an LGBT subplot running quietly below the surface,” Sefel explained.

Rumors swirling around Ansky’s own failed marriages and relationship with a longtime friend have fueled the speculation, and several productions — including “Angels in America” playwright Tony Kushner’s adaptation — have explored this angle. According to Sefel, his adaptation takes it as given, and plays this subplot as a primary force behind the rest of the play’s action.

“Love; shame; social pressures; death — it’s all in here, and it deserves its audience.”

“Leah and the Dybbuk” will be performed at 7:30 p.m. on May 18 and 19 in the Roy Bowen Theatre at the Drake Performance and Event Center (1849 Cannon Drive). Admission is free and seating is general admission. The production is supported by the Melton Center for Jewish Studies, and is recommended for audiences ages 13 and up.