Each summer, clouds of cyanobacteria, or “blue-green algae,'' swirl around the western basin of Lake Erie, producing a toxin called microcystin that can cause vomiting, numbness, dizziness and liver damage.

Back in 2014, one such harmful algal bloom (HAB) caused a two-day ban on drinking tap water in Toledo and $65 million in losses. That event cemented HABs as a serious environmental, public health and economic problem.

To tackle harmful algal blooms, the state of Ohio has been partnering with local universities to research and develop recommendations to better understand, predict and manage HABs. Funded through the Ohio Department of Higher Education, the program, called the Harmful Algal Bloom Research Initiative (HABRI), announced its newest round of grants in May that will fund projects on producing safe drinking water, protecting public health, engaging stakeholders and tracking blooms from the source.

As part of the research tracking HABs, Jim Hood, assistant professor in the Department of Evolution, Ecology and Organismal Biology, is working to fill in what he calls an “enormous” knowledge gap. He’s hoping to determine how phosphorus — the nutrient largely credited with fueling HABs — changes as it moves through a stream, and then apply that knowledge to help create more accurate watershed models that try to predict blooms. 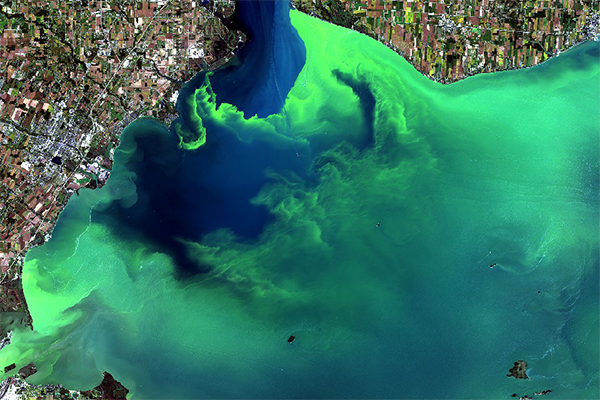 A Western Lake Erie harmful algal bloom from September 26, 2017. The scum shown here near downtown Toledo stretched all the way to Lake Ontario. This photo is from Landsat-8 (a NASA/USGS satellite).

In reality, however, “phosphorus doesn't just go down the river and nothing happens to it,” Hood said. “It's cycling and being stored; it's being influenced by the biology in the river.”

Those interactions, what happens to phosphorus as it moves through a river, is exactly what Hood hopes to shed light on.

There's a considerable amount of risk and money involved in this, so we need to be able to give really good advice about how these complicated processes work," Hood said.

Margaret Kalcic, assistant professor in the College of Food, Agricultural, and Environmental Sciences, is a watershed modeler working with Hood on the project. One of the questions she’s curious about is whether the phosphorus entering Lake Erie is indeed coming mainly from agricultural fertilizers and soils in runoff, or if instead it is coming from legacy phosphorus that has been stored in the river system for a while.

Legacy phosphorus in ditch, stream, and river beds and banks versus phosphorus directly from runoff would require two different management strategies with two potentially different timelines, Kalcic said. While adjusting agricultural practices can change the quantity of nutrients, like phosphorus, found in agricultural runoff in the short-term, it may take longer to reduce phosphorus export once it’s already in the streams and river.

Figuring out how much legacy phosphorus is contributing to phosphorus loads in Lake Erie could significantly impact the ability for Ohio and surrounding states to achieve their goal of reducing phosphorus entering the lake by 40% by 2025, Kalcic said.

Legacy phosphorus is not the only angle Hood will be exploring, though. He’s also going to look at whether, overall, the rivers retain or add phosphorus, and whether they transform phosphorus from reactive forms to less reactive forums or vice versa. He’ll be working with the U.S. Geological Survey to start sampling next summer, and he hopes to wrap up this project in 2023. 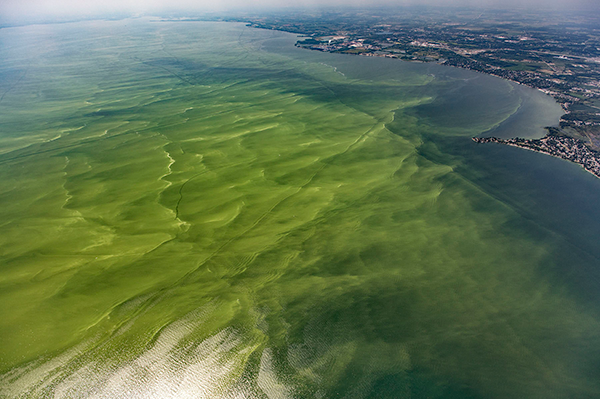 “Prediction is important so that we are able to say that we can see a path into the future, and this is how it's going to look, and this is what's going to give us the biggest bang for our buck or this is what we're going to have to adapt to,” Kalcic said. “We can throw a lot of money at this and still have little improvement for decades if the system is dominated by legacy phosphorus, although my educated guess is that legacy phosphorus is a smaller fraction of the load than the agricultural runoff.”

Hood said he’s excited to figure out just how much impact phosphorus has on algal blooms, to discover the most important factors, and to build on existing knowledge to determine solutions moving forward.

“There's a considerable amount of risk and money involved in this, so we need to be able to give really good advice about how these complicated processes work,” Hood said. “A really important part of accomplishing that is understanding what the linkages are between losses from these fields and what comes out in the lake, and also being able to build models where you can test different scenarios.”

HABRI is co-led by The Ohio State University and the University of Toledo, and managed by the Ohio Sea Grant. 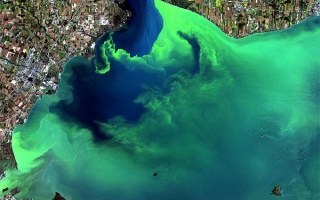