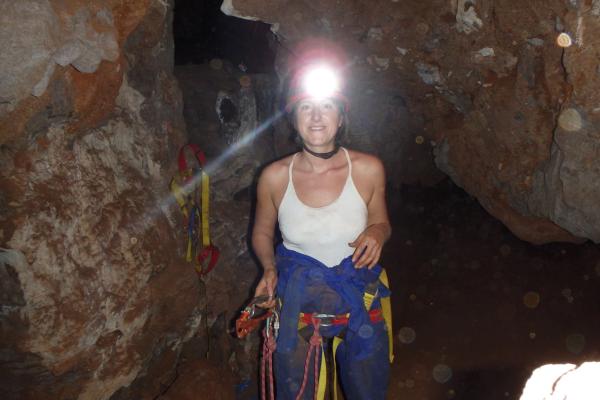 In 2013, alumna Hannah Morris (MA, anthropology, 2012) answered an ad on Facebook posted by Lee Berger, professor of human evolution studies at the University of Witwatersrand, for archaeologists with caving and climbing abilities to work in South Africa. A few weeks later, Morris was on a plane to Johannesburg to work inside one of the most remote chambers in the Rising Star cave system, at the Cradle of Humankind world heritage site in South Africa.

“When we started the project, we believed that the Dinaledi chamber might contain the remains of one of the most complete fossil hominins [human relative] ever discovered,” said Morris. “However, the chambers were so difficult to access and Lee needed a team of qualified excavators who were slender enough to reach the chambers and recover these fossils.” 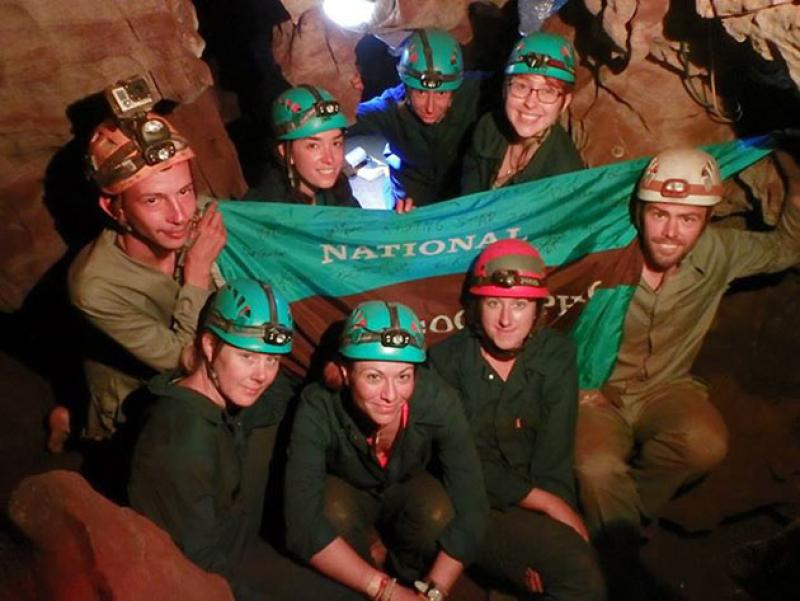 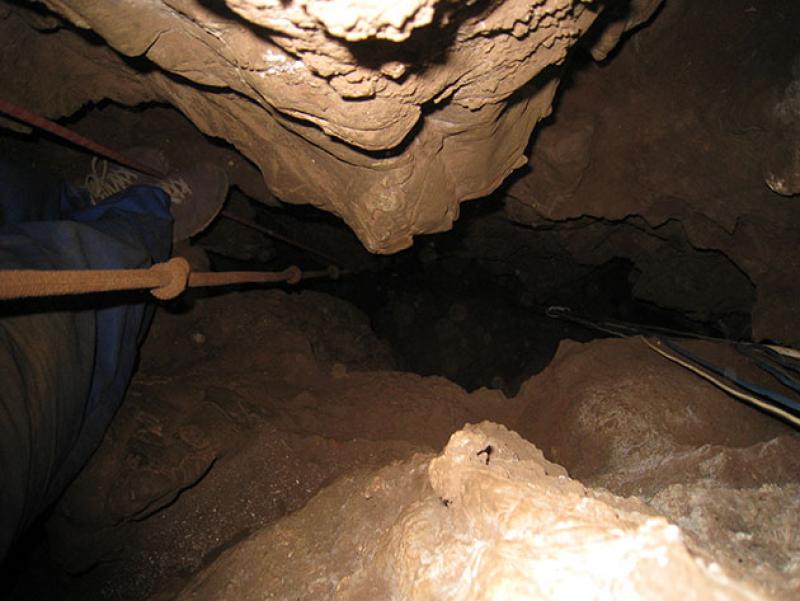 The journey to the Dinaledi chamber involves crawling through Superman’s Crawl, a short tunnel less than 25 centimeters high; climbing vertically up a 20-meter underground ridge called Dragon’s Back; and then descending through a narrow, 12-meter vertical chute that narrows to 18 centimeters (approximately 7 inches) wide at one point.

“The first time I made it down the chute, there were a lot of bruises, scrapes, ripped clothing and cursing,” Morris remembered. “There were crystals on the wall that were razor sharp, and protrusions that dug into my hips. I couldn’t turn my head to look at where I was putting a hand or foot, because my helmet would get stuck in between the walls.”

“On the second day, we realized that we were not just dealing with the skeletal remains of one individual — there were remains of more than one hominin in this cave,” said Morris. 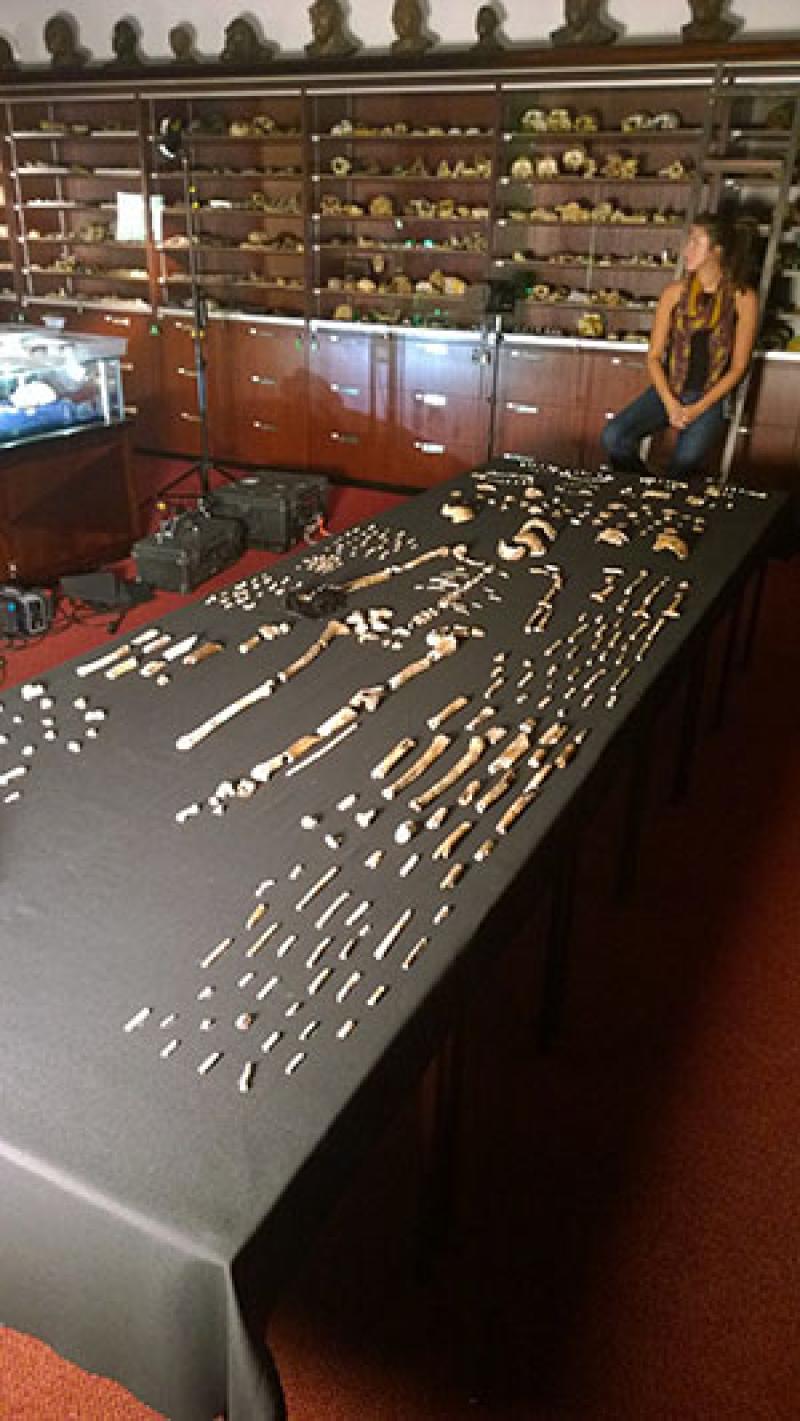 By the end of the expedition, Morris and her fellow “astronauts” excavated some 1,550 specimens in all, representing at least 15 individuals, from infants to elderly adults. These remains contained multiple elements from almost every part of the body, a remarkable find that would tell the story of the growth and development of these hominins.

“Days later, after a particularly long afternoon in the cave, it hit me,” said Morris. “I had excavated and touched the remains of six individuals from our human lineage — individuals who lived and died and walked across the same path that I was walking down. I sank down to the ground staring at my hands. I think each of us had moments like this, when we were able to grasp for a moment the impact of what we were discovering.”

In May 2014, at the Rising Star Workshop in Johannesburg, scientists from around the globe analyzed the remains from the Dinaledi excavation and produced a series of scientific papers detailing the anatomy, taxonomy and context of the hominin remains. This analysis ultimately led to the conclusion that these fossils represented a new species of hominin, Homo naledi, that deliberately disposed of their dead in this chamber.

“I was truly honored and grateful to be part of such an incredible team,” Morris said. “And now comes the really fun part — Homo naledi has a lot more to tell us about hominin evolution, what it means to be human, and how we came to be the way we are.

The Dinaledi chamber is now the richest fossil hominin site on the continent of Africa and one of the most well-represented fossil species in the world.

Morris is currently a graduate student at the University of Georgia, ICON & Warnell School of Forestry.