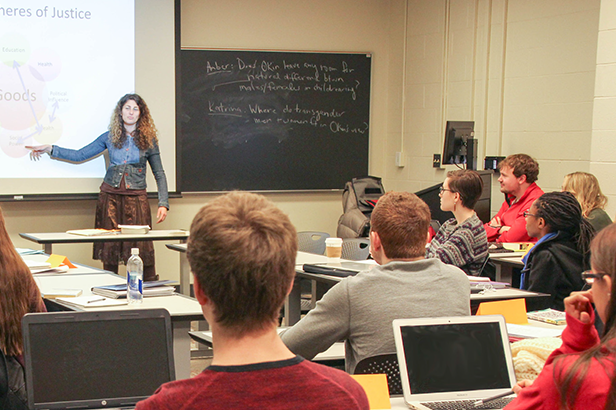 Philosophy literally translated means “love of wisdom,” but the discipline involves so much more. Philosophy addresses the fundamental problems of existence, values, mind and language. It is a catalyst for innovation and a demonstration of the power of human reasoning. Studying philosophy helps you think critically and creatively, and is the foundational basis for any number of rewarding careers.

PHILOSOPHY 1100: INTRODUCTION TO PHILOSOPHY
Explore the nature of reality, morality and free will, God’s existence, and some of life’s other big questions.

PHILOSOPHY 1500: INTRODUCTION TO LOGIC
Learn how to construct strong arguments and how to identify various kinds of fallacies in reasoning.

PHILOSOPHY 1850: INTRODUCTION TO PHILOSOPHY OF RELIGION
Analyze the nature of religion and the foundations of religious belief.

PHILOSOPHY 3210: HISTORY OF ANCIENT PHILOSOPHY
Get acquainted with the most influential figures in the history of human thought, including Socrates, Plato and Aristotle.

PHILOSOPHY 2342: ENVIRONMENTAL ETHICS
How should humans engage the world around them? The treatment of non-human animals, the problem of climate change, and the ethics of sustainable development all pose important moral challenges.

PHILOSOPHY 2465: DEATH & THE MEANING OF LIFE
Explore what makes life meaningful, including the role of the afterlife, the importance of achievement and happiness, and the question of immortality.

The study of Philosophy develops a number of versatile, in-demand skills, including lateral thinking, creative problem-solving, analytical reasoning and the ability to read, write and express ideas and arguments clearly. Described in The Atlantic as “the most practical major,” the majority of our philosophy majors go on to careers outside of academia in a number of diverse fields.
• Law
• Business
• Nonprofit work
• Public Relations
• Marketing
• Health Professions
• Computer Science
• Public policy
• Writing & Journalism
• Education

Philosophy teaches students how clear and careful thinking can illuminate all sorts of questions, even the most difficult ones. It develops critical capacities for students across the University. Support for the department can help fund student or faculty research, bring leading philosophers to campus to stimulate and interact with our community, sponsor a conference on an important topic of contemporary debate or fund scholarships for low income high school students to attend the Philosophy and Critical Thinking Summer Camp at Ohio State.

The PhD program is strong in the analytical tradition with several areas of special strengths: Philosophy of Mathematics and Logic; Ethics and Metaethics; Modern Philosophy; Philosophy of Mind and Cognitive Science; Metaphysics; Moral Psychology; Philosophy of Language; and Action Theory.

The Center for Ethics and Human Values

Ohio State’s Center for Ethics and Human Values organizes a range of programs aiming to raise awareness of ethical challenges facing society. The leadership of the Center from the start has included members of the Department of Philosophy.

Cognitive science is an interdisciplinary study of the mind that incorporates psychological, philosophical, linguistic, biological, and artificial intelligence approaches to how knowledge is acquired, processed, and represented in the mind. (COGNITS-MN)

Ranked in the top 5th of U.S. doctoral programs, the Department of Philosophy is a strong program and offers MA and PhD degrees. (MA, PhD)