Alum and "My Friend Dahmer" author reflects on success

When award-winning cartoonist and Ohio State alum John “Derf” Backderf created "My Friend Dahmer," a graphic novel that explores his high school acquaintanceship with serial killer Jeffrey Dahmer, he couldn't have predicted the success of the 2017 film adaptation.

Backderf also didn't expect to be met with a packed house and eager audience when he returned to campus last fall to introduce an advance screening of the film, which will be released on DVD and Blu-ray on April 10.

“It was a career highlight ... to have that thing sell out in 10 minutes with a huge waiting list — I felt like a rock star," recalled Backderf (BA, journalism, 1983). "I tried to just enjoy the moment and let it wash over me all while staying respectful to the topic, which is not something you should be flip with. Jeffrey Dahmer caused misery and pain to everyone he came in contact with. It was a contrast and I tried to pull both off.”

Making the evening even more memorable was how faithfully writer/director Marc Meyers adapted Backderf's novel. Hollywood is littered with unsuccessful and misguided book-to-film updates, but Meyers crafted an intense work powered by impressive performances (most notably Ross Lynch’s complex and riveting turn as the notorious serial killer) all while retaining the book’s haunting power. It is an adaptation with which Backderf is very happy.

“It’s really hard to tell during the process how a film is coming together when you’re not a filmmaker. I was hoping it was coming together, but who knew? It wasn’t until I saw the final product that I could say it turned out really well.”

The success of both the graphic novel and film — the book was selected by Time Magazine as one of the best nonfiction books of 2012, and the film racked up laudatory notices from the likes of Village Voice and Variety — solidifies Backderf’s place in Ohio State’s rich legacy of cartoonists and comics artists, which includes such legends as Milton Caniff, Jeff Smith and James Thurber.

Like those iconic creators, Backderf says that Ohio State — especially his time at The Lantern — had a potent influence on both his personal and professional trajectories. 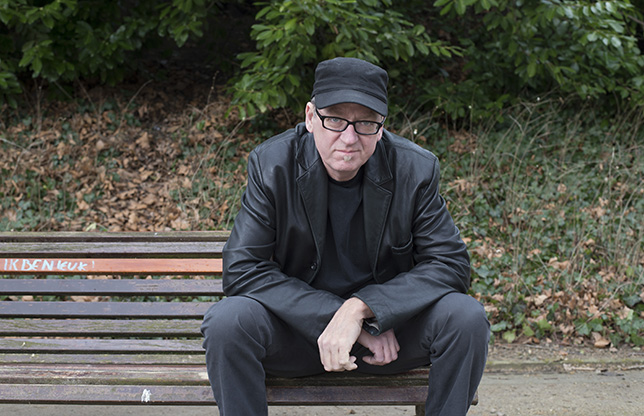 Not only did he meet his wife in the newsroom, he worked as a political and spot cartoonist, churning out upward of six or seven cartoons a week, a volume of work about which he says, “I can’t believe I was that productive! Fueled by youth.”

That workload, according to Backderf, “taught me to respect deadlines. I learned to constantly work and then you get into a certain routine and it wasn’t that bad — we still had time to go to the Out R Inn or Black Forest Inn. We had a pretty good time at The Lantern; it was a shared experience that really bonded us.”

It was also with The Lantern that Backderf had his first brushes with controversy too, one such incident revolving around a cartoon about football star Art Schlichter. Schlichter’s notorious gambling issues and ongoing courtroom drama resulted in a satirical cartoon by Backderf that featured the football star being fitted for cement shoes.

“You would have thought I drew a cartoon about the Pope chasing little boys around. It was unreal, the outcry,” Backderf said.

The controversy did not ease either, with Backderf being confronted publicly by a mobile jeering peanut gallery, which included getting yelled at on the Oval and calls from the then-athletic director to have him kicked out of school.

His editor and the university supported him, however, and he continued making cartoons. It was during this time that Backderf experienced a fortuitous moment that looms large over his life and work: his discovery of what was then the Milton Caniff Library. Made up of two converted classrooms, the humble space served as ground zero for what is now the Billy Ireland Cartoon Library and Museum.

“I was walking by it all the time. I remember just seeing that little plaque on the door and I thought ‘what the hell is that?’ Curiosity got the best of me and I opened the door and there behind the desk was Lucy Shelton Caswell,” Backderf recalled.

Caswell, curator and professor emeritus at the Billy Ireland Museum and founder of the Caniff Library, was a mentor and friend during his time at Ohio State, and he was among the first group of students to take her "History of Cartoons" class.

“I really feel this incredible kinship with the Billy having watched it grow up and having been there almost since the beginning.”

This passion for comics and for their history fittingly found a place during Backderf’s Columbus visit when he met with a group of English students in a lively conversation about his work, career and creative process.

“It was really a lot of fun," Backderf said. "They were smart kids and the questions were great.”

He told students that he looks “for stories that haven’t been told before. You’re not always going to get that, but that’s what I look for.”

Backderf continues to seek out and tell those stories, including his most recent graphic novel "Trashed," and a yet-to-be-disclosed project at which he is currently at work.