Harvey — primarily a poet and professor at the University of Pittsburgh — was first approached in 2016 by journalist, MacArthur Fellow and writer for Marvel's "Black Panther" series Ta-Nehisi Coates to collaborate with him and best-selling writer Roxane Gay on the rousing and powerful Black Panther spinoff "World of Wakanda." Harvey wrote a 10-page origin story for Zenzi, a character in World of Wakanda who has the ability to amplify people's emotions. 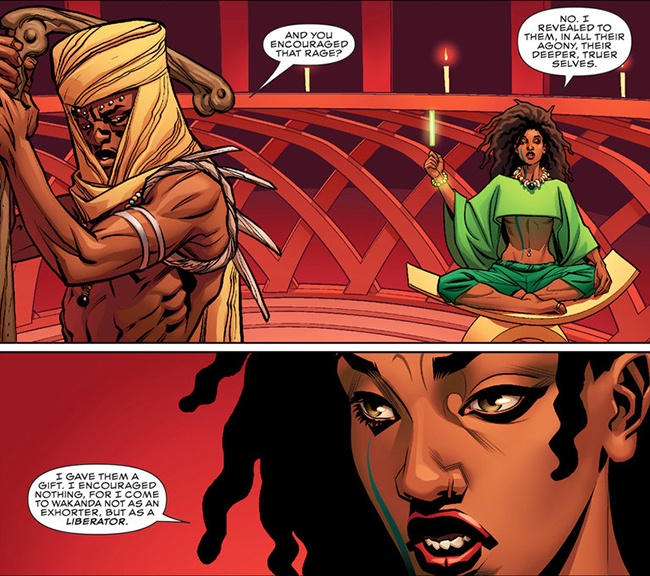 Harvey also took her pen to a storyline for Storm in "Black Panther and the Crew." As the first Black woman in history to author the character, Harvey hoped to bring a fresh point of view to Storm, one that incorporated an examination of the character’s personal history, as well as the influence of African American women poets.

“When writing for Storm, I wanted to bring more of her sensibilities as a Black woman getting to know her Harlem roots. I enjoyed the challenges of writing how Storm would dress, who she would befriend, the kinds of doubts she might have about herself.”

It presents a new complexity to the character, one that drew out and emphasized those poetic influences.

“Bringing that kind of complexity and variety to Storm was important. That complexity was fleshed out a little by paraphrasing poetry lines and themes from Black American women poets like Sonia Sanchez and Audre Lorde,” Harvey said, adding that Lorde was especially influential. “Lorde had no problem calling people out for treating Black women in a reductive manner. I wanted Lorde's kind of pushback in Storm's story as well.”

It was a development that found its first inklings in Coates’s work on the Black Panther series.

Ta-Nehisi had actually started this kind of nodding to poetry in Black Panther. That's one of the things I loved about the series and I wanted to see that continue.”

The worlds of poetry and comic books may not seem compatible, but for Harvey, the two mesh extremely well.

For the poet, the forms and rules of line length, rhythm, flow and structure inform and echo creating a story for a comic book. To Harvey, it all begins with an analysis of the page and how that can dictate the content of the story.

“I got a lot of satisfaction out of analyzing the pages of the comic, the first comics I worked on were with Marvel and when you start analyzing the pages, it’s about four or five panels a page and I thinking, 'How many words can I fit into one panel? How many people can be talking at one time in a panel?' And then breaking that down numerically.”

It is this almost mathematical approach that calls to mind the poetic form.

An @OSUEnglish alumna is writing for #BlackPanther comics at @Marvel. #ASCDaily

A comics writer is beholden to another component that is not as dominant in a poem — that of the visual — and how that impacts the story’s direction and reader’s attention.

“In poems, you are making the visual out of words, but with comics there is a whole other visual that is literally happening with the illustrator," she said. "You have to think about when the reader is going to turn the page and that was a fun challenge and not something I thought about as a comic book reader or graphic novel reader."

Those poetic roots have long been part of Harvey’s life, but flourished in her undergraduate work and eventually her graduate work at Ohio State, a time she looks back on fondly.

She came to study at Ohio State after spending time in Japan after graduating from Howard University and was eager to reconnect with her younger sister, who also attended Ohio State.

“Ohio State was always on my top list of places to go and the creative writing program is really, really good," Harvey said. "I especially loved working with Kathy Fagan, and she is the person who made me open to form in poetry.”

"To not say ‘I’m THE expert on the forms in poetry, but I’m curious like you.’ That was a really big thing to me," she said.

Harvey also found an outlet for her love of art at the Wexner Center for the Arts.

“When I was in undergrad I worked at the Phillips Collection and the Smithsonian and I liked the idea that there was this really amazing art center at Ohio State," she said. "Finally: the library, too! That was huge. I have a background in library science and I have a huge love and affection for the library."