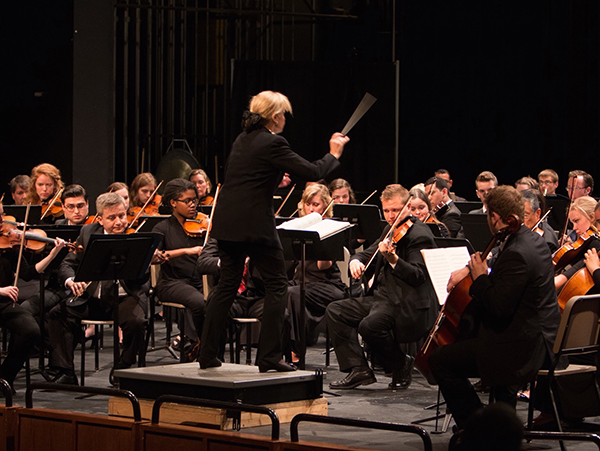 As a young violinist at Ohio State, Miriam Burns learned firsthand the value of performing as a soloist in an orchestra.

“It was just so exciting to be in the middle of an orchestra as a soloist,” Burns said. “It’s a tremendous opportunity.”

Now serving as a visiting professor and director of orchestras in the School of Music, Burns runs the Ohio State Symphony Orchestra’s annual concerto competition, which awards its winners an opportunity for that coveted soloist spotlight.

This year, she knew she couldn’t let the coronavirus ruin that opportunity.

Normally taking place in April (for doctoral students) and November (for undergraduate and master’s students), the concerto competition winners earn a solo performance at an Ohio State Symphony Orchestra concert during the spring semester. Winning the competition, which dates back at least 35 years, provides students with a resume-building moment that can bolster applications for more advanced education and jobs.

Simply put, winning the concerto competition signals that a student is one of the best the School of Music has to offer.

“It’s a really big event, and something that the kids look forward to all year long,” said Burns, who is now in her second year helming the competition. “First thing in the fall, they say, ‘When can I enter the competition? What do I have to do?’”

When the pandemic hit, it quickly became clear that the doctoral student competition in April wouldn’t happen on time. Burns pushed it to September, when the hope was that the coronavirus would be more under control.

As fall arrived, the competitions began with modified schedules and altered performance spaces. Instrument- or section-specific subgroups within the school nominated students to take part. For some groups, like the woodwinds, auditions to enter the competition switched from an in-person format to a prerecorded video. That type of audition takes away some of the spontaneity of live performance, and some students played their auditions along with a pre-recorded piano accompaniment that provides less feedback than an in-person pianist could.

But finalists were selected, and the in-person finals of the concerto competition were held at Hughes Auditorium. The judges sat far back in the hall to maintain social distancing, and members of the orchestra were distanced as well. Woodwind and brass players sat 10 feet apart, and string performers were allowed to be 6 feet apart.

That distancing, though, led to of the biggest challenges of the finals: The number of people in the orchestra had to be reduced due to distancing mandates and the size of the stage. With smaller numbers, Burns was able to challenge some of the school’s music conducting students to rewrite pieces for less instrumentation.

“You have to go through the score with a fine-tooth comb,” Burns said. “Basically what they’re doing is reinventing the woodwind parts. It’s a great exercise for the conducting students because this is what they’re going to do in real life.”

With parts rewritten and students able to play music safely, the competition was a success. Three doctoral students were selected as winners along with four students from the undergraduate/master’s competition. Selecting winners from a variety of different musical areas is no easy task, but the winners truly stand out among their peers.

“The winners have sold us on the piece and the way they’re playing it,” said Katherine Borst Jones, a professor in the School of Music. “They’re playing it in a way that says something. The students who have the most convincing performance that maybe touch us emotionally, even, are going to be the winners.”

Normally the winners’ reward – that resume-building solo performance with the Ohio State Symphony Orchestra – takes place in one large concert toward the end of the spring semester. But this year, Burns had to split the winners into four different, biweekly concerts starting Feb. 3.

The winners and their performances are:

The most noticeable change to the general public, of course, will be that these concerts — usually the best-attended all year, Burns said — will take place in an empty hall. But the School of Music will livestream all of them, giving friends and family a chance to watch from home.

In-person music performance has been one of the trickiest areas to navigate during the pandemic, but Burns and the symphony orchestra still managed to hold the concerto competition safely. That speaks to the importance of the event within the School of Music and the students’ desire to showcase their talents.

“It fosters a spirit of camaraderie in the orchestra,” Burns said. “The thing I really like about Ohio State is everyone is rooting for each other. It’s like a little family.” 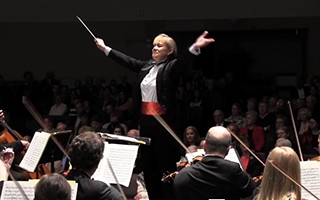