A photograph can sometimes be more powerful than its real-life subject.

Professor Emerita in the Department of Art Ardine Nelson hopes her exhibit that opens Aug. 19 at Hopkins Hall Gallery, featuring images of specimens from the Museum of Biological Diversity (MBD), is one of those instances.

The 26, mostly life-size or larger-than-life portraits in “From the Museum of Biological Diversity | Transitory States” reveal a small, compelling selection of the MBD’s specimen collections, which comprise 9 million species used for research and education, including insects, fish, plants, birds and mammals. 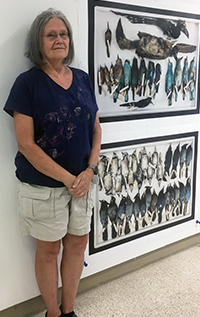 Nelson, a 2008 Guggenheim Fellow, first became inspired to photograph the specimens after attending the MBD’s annual open house, which draws thousands of visitors each year from the Columbus community and beyond.

“After seeing what they had, I thought, ‘I have to come up with a project,’” Nelson said. “I became really interested in learning more about which species are endangered or extinct, which many that I’ve photographed are.”

A main focal point in the gallery is what Nelson has coined “The Researcher’s Wall,” a grid of life-size images, hung with giant push pins, of birds that lay eternally still inside nine drawers at the MBD. 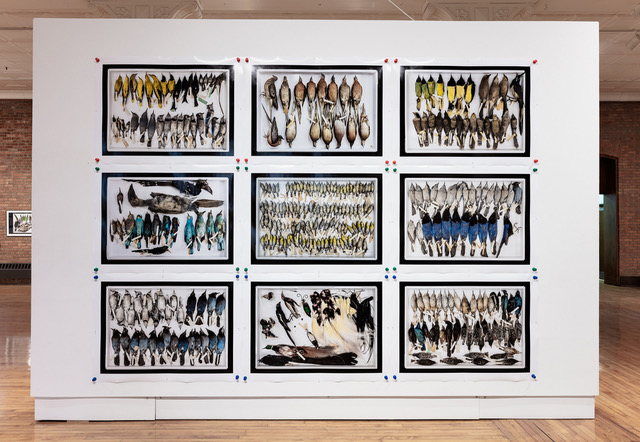 “It struck me that they really look 4x6 prints or postcards that you would put up on a bulletin board, but here they are made so much bigger as one-to-one reproductions of the drawer,” she said.

Viewers will also be faced with detailed, 40-by-60-inch prints of jars containing turtles, salamanders and other curious creatures, as well as striking images of butterflies, beetles, lamprey, catfish and more. Several jars from the MBD will also be on loan for display at the exhibit.

To access the specimens, Nelson worked closely with MBD curators Marc Kibbey (Fish Division), Luciana Musetti (Triplehorn Insect Collection), Angelika Nelson (Borror Laboratory of Bioacoustics) and Grant Terrell (Tetrapods Collection). After a while, “they kind of let me go on my own,” she said. “It was a lot of wandering around and looking on the backs of shelves and finding things I was interested in.”

In addition to the impressive array of fauna from the MBD, the show features flowers from Nelson’s garden that she photographed at stages of dying or death.

“Certain flowers last only a day (or night) before beginning to wither and die,” her artist’s statement reads. “These faded, muted tones … direct the viewer to consider the notion of all life cycles in our world with the longest, the life cycle of our universe, and the shortest, the adult female mayfly typically living for five minutes.”

Nelson has worked with both environmental and structural subjects, but much of her other environment-focused photography — such as her series on communities of kleingardens in Dresden, Germany — focuses on the planted landscape and its “promise of regeneration.” 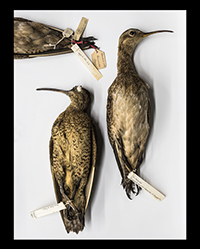 “Right now, I’m looking at the not so beautiful part of the aging process,” she said.

While specimens are new work for her, Nelson is no stranger to featuring the death of spaces, such as her sequence of photos featuring the Columbus City Center mall before it was demolished in 2009 and Columbus Commons built in its place.

Despite depicting death, Nelson said she also found life and joy in photographing these specimens.

“This stuff is really fascinating. I always left smiling because of what I was able to see that day, and I am hoping people get some of that by seeing the prints … and that they’ll think about climate change and the environment,” she said. “I feel that I have only just begun this project.”

In addition to the Museum of Biological Diversity, this exhibit is also supported by Ohio State’s Emeritus Academy and the Greater Columbus Arts Council.