Answer: This Arts and Sciences alumna graduated in 2006 with a BA in history of art, played piccolo in the Ohio State Athletic Band and now is a three-day Jeopardy! champion with total winnings of $76,400.

The correct question: Who is Deborah Elliott?

Elliott, originally from New Concord, Ohio, appeared on the long-running game show on July 17 and, after winning once, returned for the July 18 and 19 airings to secure additional wins. Here, she answers a few questions about her time at Ohio State and her experience as a Jeopardy! contestant.

What have you been up to since graduating from Ohio State?

I earned my masters in art history from Columbia University, and I have had the opportunity to work with some great museum colleagues at the Columbus Museum of Art and the Zanesville Museum of Art. I have been teaching art history for five years at the college level (Ohio University Zanesville and Zane State College).

How did the Department of History of Art equip you for your career path?

I didn't consider myself a public speaker when I first started at Ohio State, but the courses offered in history of art demanded a high level of communication, both in writing and speaking. It really prepared me to communicate my ideas on the page and in front of classes, which comes in handy when you teach a class or speak at a gallery opening.

What were some of your favorite memories from playing piccolo in the Ohio State Athletic Band?

We traveled to Big Ten tournaments for basketball, hockey, and volleyball; I got to experience Chicago and Minneapolis winters that way. I would say my favorite memory is marching at the Spring Game. For someone who wasn't in the Marching Band, it's an incredible opportunity to take the field and entertain the crowd in the Shoe.

What made being part of the Athletic Band special?

Just to reiterate something our band directors would share with audiences, that the Athletic Band (and Marching Band for that matter) is full of students who love music, so some of us were indeed music majors. But the vast majority of us studied history and art history, engineering, political science, psychology, etc.

Each band member is an example of what the College of Arts and Sciences is about: exploring different subjects, finding not just one passion but many, and sharing those passions with others.

What inspired you to take the Jeopardy! test in hopes of becoming a contestant?

My sisters and I always watched the show with our grandparents, so I developed a love of trivia early. After finding so much fun could be had at pub trivia with friends and classmates in New York, I decided to start taking the Jeopardy! online test each year. Why learn so much and not have fun or not share it with others?

What was the most memorable part of the Jeopardy! experience?

Meeting my fellow contestants. We're so different, yet we were in Los Angeles for a common purpose and bonded over funny wrong answers. It's always great to meet people with whom you can chat about such a broad range of topics, from art to science to politics, without feeling inhibited. We stay connected online now.

What's something about Jeopardy! that most wouldn't know?

Contestants are not naturally all the same height! I'm rather short, and the stage is equipped with rising platforms to help people like me stay in the frame. 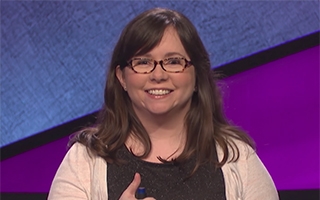