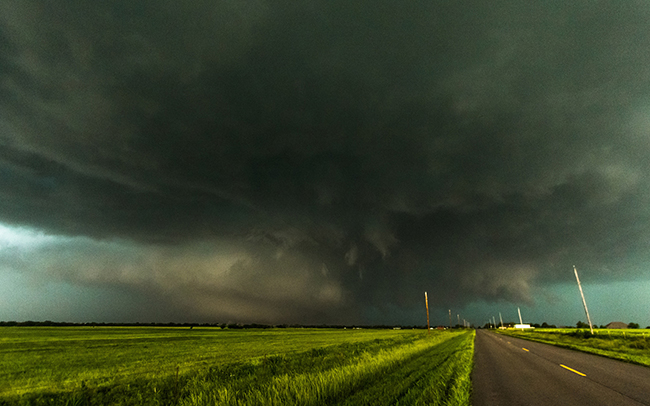 The sky is painted an ominous, green tint. A furious wind gusts with sporadic pace. Flashes of lightning flicker through the dark clouds.

In the distance, a colossal tornado tears unbridled across the rural landscape. It’s May 31, 2013, in central Oklahoma, and standing in front of a camera reporting live on the chaotic scene is field anchor for The Weather Channel and 1995 Ohio State alumnus Mike Bettes.

“Look at that monster; this is a huge tornado,” Bettes says on air as the camera pans from him to the twister. “If you live in Union City south of El Reno, you have to take shelter now. There’s no more time to waste.”

Sensing potential danger, Bettes cuts the broadcast short, telling the anchors back in The Weather Channel studio that he and his team are going to drive south to escape the tornado’s path.

The group jumps back into the vehicle and races down Highway 81. Unknown to them, however, is that the tornado is increasing its speed and doubling in size. In seconds, the crew is at the cyclone’s mercy.

It gets darker. The rain grows heavy. Visibility plummets. Bettes watches as the car in front of his gets swatted off the road by the tornado’s extraordinary winds.

The car is lifted off the pavement. Bettes squeezes his eyes shut as time grinds to a halt and be feels himself become weightless.

Mike Bettes (BS, atmospheric sciences, 1995), who’s been with The Weather Channel for nearly 15 years and currently hosts “Weather Underground,” fell in love with weather as a kid, watching thunderstorms from the garage with his dad.

A native of Akron during his childhood and Lexington in high school, Bettes knew he wanted to study meteorology. The only university that offered such a program was Ohio State.

“I was a Buckeye since birth,” Bettes said. “Ohio State was only an hour down the road, so it was a pretty easy choice.”

After graduating, Bettes landed a weekend gig at WKEF-TV in Dayton, where he stayed for a year before moving on to ABC6 in Columbus. Following a three-year stint at ABC6, he was named chief meteorologist at WLOS-TV in Ashville, North Carolina. Bettes was in Ashville for three years and reported on the region’s most powerful hurricanes, including the devastating Hurricane Isabel in September 2003.

The evening after Isabel made landfall, Bettes was sitting on a North Carolina beach waiting to go on air when his phone rang. It was The Weather Channel.

Bettes has filled several roles with The Weather Channel and has covered several of the biggest weather events in history, including Hurricane Katrina in 2005, the Joplin, Missouri, tornado in 2011, and Hurricane Harvey in 2017.

Starting in 2009, Bettes reported on tornadoes for The Weather Channel alongside the government-funded VORTEX2 field project, which was aimed at the scientific study of tornadoes. In 2013, Bettes led The Weather Channel Tornado Hunt Team, which traveled up and down Tornado Alley chasing and broadcasting severe storms.

That’s when he found himself inside the largest tornado ever recorded.

His eyes are shut. Time is still. He is weightless. And Bettes knows he’s in the tornado.

I thought, ‘Am I dead already?’” he said. “And then I saw kind of an angelic vision of my wife. I’d only been married for a few months at the time. So, I was having both these streams of thought at the same time, and then a very harsh reality happened where the vehicle hit the ground.”

“I remember yelling out to our producer and photographer, ‘Are you guys OK?’” Bettes said. “And everyone was alive and conscious and they all yelled back to me that they were OK. Then we all got out, and I saw the tornado in the field moving away from us, and I was just like, ‘Wow. I can’t believe that just happened.’”

The tornado that lifted Bettes’ vehicle 30 feet into the air and tossed it 200 yards away went down as the widest tornado ever: 2.6 miles wide. The twister received an initial EF3 rating based on damage, but that rating was subsequently upgraded to EF5 — the highest on the scale — based on radar analysis that measured winds up to 301 mph.

Bettes and his team, miraculously, received minor injuries. Other storm chasers, however, were not as fortunate. Professional tornado documenters Tim Samaras, his son Paul Samaras and their colleague Carl Young were killed when their vehicle was thrown nearly a half-mile by the tornado. In all, the tornado killed eight people.

“It was a moment that had more impact on me than I thought it would,” Bettes said. “It gave me real empathy for what victims of tornadoes go through physically and emotionally, and how jarring it can be and how life-altering it can be.”

Most years, Bettes returns to Ohio State to speak at the annual Severe Weather Symposium hosted by the Meteorology Club. He enjoys coming back to his roots to see how the club and the atmospheric sciences program have both grown, and he continues to appreciate how the program and the university in general shaped his career.

“Ohio State really set me on a path to good things,” he said. “I think that’s where all the students who are in the atmospheric sciences program are today; they’re ready to take on the world.”

As for advice Bettes has for students who want to carve their own meteorology path, Bettes says to be steadfast in their quest to attain their goals.

Be patient, but be persistent,” he said. “And it’ll pay off. I look at where I am today, and I never could’ve imagined the good fortune I have now if it were not for the great education at I got at Ohio State.”