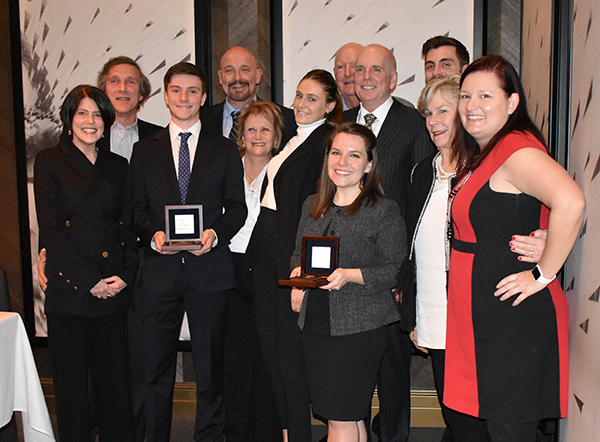 Rachel Skaggs (center in gray blazer) celebrates her appointment to the Lawrence and Isabel Barnett professorship in January 2020.

Rachel Skaggs knows all about the trope of the starving artist: an artist who can’t really make a living and struggles to survive on a gig-by-gig basis.

As the Lawrence and Isabel Barnett Assistant Professor of Arts Management under the Department of Arts Administration, Education and Policy (AAEP), part of her job is to combat that stereotype and make sure Ohio State arts students have a clear path laid out for them regardless of their level of fame in the arts world.

Not everyone can be Andy Warhol or Beyoncé, after all.

“That’s not what all artists are going to be,” Skaggs said. “If we can prepare students for careers that are more like normal careers in the arts and not that superstar career, as a whole we’ll be developing a prepared workforce.”

Developing that prepared workforce is a major thrust of the Barnett Center for Integrated Arts and Enterprise, where Skaggs works. Created through a gift from the Barnett family in 2014, the Barnett Center’s goal is to make sure students understand the business side of an arts career. Nationally, Ohio State is one of just a handful of universities that offer a program like it at the doctoral level.

Today, many artists will have to deal with the gig economy, where their income is derived from individual commissions rather than a steady salary. But instead of seeing that as a negative, the Barnett Center helps prepare students for that reality by showing them how to network and know their value.

“People often think of networking as gross or unsavory, but it’s how you connect with people who are interested in the same things you are,” Skaggs said. “That’s a healthier way to look at it and more helpful for them to get jobs and keep jobs.”

In fact, in her research, Skaggs has found that artists are ahead of the curve in knowing how to make a career out of a series of contracts and working for different people, a skill that a larger percentage of the workforce is going to need as more fields become reliant on a gig economy. Skaggs has also found that people who graduate with an arts degree are satisfied with their choices and their income.

At the undergraduate level, the Barnett Center and AAEP can provide invaluable business fundamentals to ground students looking to get into the entertainment industry. 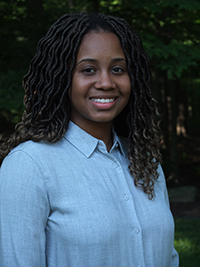 Cartier Pitts (left), who graduated in May with a degree in arts management and minors in Spanish, dance and music media enterprise (MME), got her career started while she was still in school. A musician, singer and dancer growing up in Cleveland, Pitts decided she wanted to become a music manager. Seeing that her friends in engineering, law and pre-med already had plans mapped out for them, she decided to map out a path for herself.

While attending a music industry club meeting, she met local singer Ash and began representing her. Using guidance from David Bruenger — the director of the MME program and a member of the Barnett Center’s oversight committee — she decided to form her own LLC. With Carnelian Productions LLC up and running and her first client signed, Pitts worked to expand her business while still an undergraduate.

She benefitted greatly from having the Barnett Center as a resource throughout her time at Ohio State, and she has now worked with four different artists during her nascent career.

“I really have had professors to really push me mentally, academically,” Pitts said. “I’m very excited to see how things are going to play out in the near future, and I’m hopeful that my education at Ohio State has set me up for success.”

Erin Hoppe’s path to the Barnett Center was a different one. Originally from California, Hoppe was looking for something different after her bachelor’s degree in economics from the University of California San Diego. After some time working for arts organizations in Washington, D.C., Hoppe returned to school and got a graduate degree in arts policy and administration from Ohio State in 2009.

After earning that degree, she stayed in Columbus, working for the nonprofit VSA Ohio

Where she helped make the arts more accessible and inclusive for people with disabilities. But 12 years later, she came back to Ohio State where she is a Barnett Fellow and working on her PhD in Arts Administration, Education, and Cultural Policy.

While obtaining her own advanced degree at the Barnett Center, Hoppe gets to teach students and see the benefits of the center’s education daily. She sees the benefit of showing students that not all art is “high art” – theaters and museums, for example. Using her previous career in making art accessible for everyone, she hopes students realize that art can be everything from participation in. local festivals and making videos for YouTube.

“The people [at the Barnett Center] really do want to help mold and grow students to be community members who are thoughtful and caring and have an eye toward justice to be inclusive and equitable and accessible,” Hoppe said. “It’s a really interesting and exciting place to be.”

Skaggs hopes that excitement continues to grow. Though she’s relatively new to Ohio State — joining the Barnett Center in 2019 after earning her PhD from Vanderbilt University — she’s hoping to develop new ideas to help serve all arts units and not just AAEP.

She built a course for Spring 2021 on arts entrepreneurship where students will figure out concrete ways to make their careers work, giving them the business management skills they’re not typically getting.

“We’re trying to make it so the career path is not so uncertain,” Skaggs said. “They can have that framework that they can work within to really build a career out and have the flexibility to make their art but know it’s being made in a way that can support them. The Barnett Center should be the place for bringing all arts students together. The business piece really cuts cross all of it, and building it into a community resource is one of my goals.” 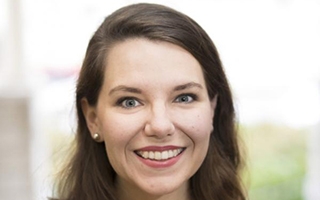