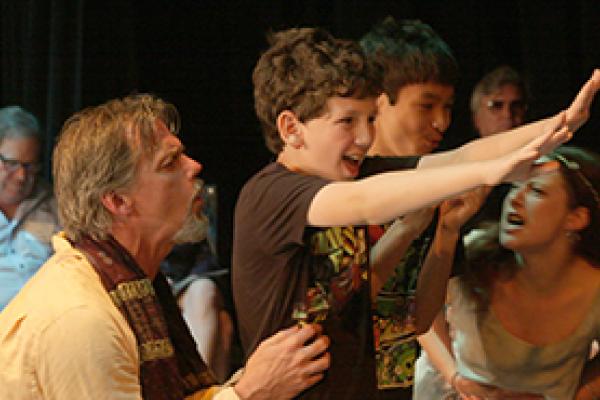 A new study showed improvement in the social and communication skills of children with autism spectrum disorder (ASD) using a signature approach pairing the recitation of Shakespeare’s rhythmic language with physical gesture. This study grew from a collaboration with the Ohio State Department of Theatre and Nisonger Center.

Results, published recently in the journal Research and Practice in Intellectual and Developmental Disabilities, showed better language skills and recognition of facial expressions in children with ASD, according to an announcement from the Wexner Medical Center.

“At the end of the study, which incorporated Shakespeare’s play The Tempest, children with autism showed significant improvement in their social skills and their ability to engage in social relationships,” said Marc J. Tassé, professor of psychology and psychiatry and director of the Nisonger Center at The Ohio State University Wexner Medical Center.

Fourteen children with ASD were enrolled for the only systematic implementation of a drama-based social skills intervention known as the “Hunter Heartbeat Method,” created by Kelly Hunter, an actress in the Royal Shakespeare Company in London. The novel therapeutic approach was designed to improve social interaction, pragmatic language and facial-emotion recognition skills of individuals with ASD.

“These children are taught these core skills in a very relaxed and playful environment, where it's almost like they're not aware they're being taught,” said Tassé, also co-author of the study.

Each session of the “Hunter Heartbeat Method” begins with the children quietly seated in a circle on the floor making a “Hello Heartbeat” by tapping their hand on their chest. This allows them time to adapt to the environment and signifies transition into the session. Facilitators then lead the children through a series of games based on the plot of The Tempest, which focus on skills such as facial-emotion recognition, eye contact, gross motor imitation, affective imitation, pragmatics of dialogue exchange, personal space, turn taking, affective expression, humor and social improvisation.

Initially, two facilitators model the game in the center of the circle; subsequently, facilitators and children break into twosomes for one-to-one repeated practice and retroactive feedback of the game. Facilitators and children then return to the circle where they take turns “performing” for the other participants. After a number of games, which ultimately reflect the plot progression of The Tempest, the “Hunter Heartbeat Method” intervention concludes with a “Goodbye Heartbeat.”

Pre-test assessments were conducted to obtain baseline information for each child. The children participated in the intervention one hour per week after school for 10 weeks. At the conclusion of the study period, post-test assessments were completed, and parents and participants completed questionnaires regarding their impression of the intervention.

Those research results come as no surprise to Kevin McClatchy, assistant professor of theatre and director of the Shakespeare and Autism program.

“The project is a unique collaboration between the arts and the sciences,” McClatchy said. “It uncovers the effectiveness of playing games based on the works of Shakespeare to confront the communicative blocks facing children with autism.” The project focused on twice-a-week workshops with children at the Nisonger Center, led by Ohio State students enrolled in the Theatre course, Shakespeare and Autism.

“When we’re engaged with children in a workshop, we start slowly and allow time for them to connect,” McClatchy said. “There’s this ‘armor’ that they have. But over the course of an hour-long workshop, with every child you start to see the armor fall away. It’s amazing.”

He added, “You make a connection with a child; something different happens to the child and to you too. This is what art is supposed to be; what it can do and should do.”

He said participants all acknowledge the significant impact of the program, but the research makes it tangible, real and provable. “The commitment is to make this program a part of Ohio State,” he added, reaching beyond even the important research with the Nisonger Center.

Ohio State connected with The Help Group, the largest nonprofit of its kind in the U.S. serving children, adolescents and young adults with special needs related to autism and other challenges. There, Ohio State participants, led by Kelly Hunter, and 15 local children from The Help Group’s Bridgeport School, engaged in an interactive performance of Shakespeare’s The Tempest.

Next spring, McClatchy will again lead an Ohio State course based on Shakespeare and autism; students involved in the class will lead workshops at the Nisonger Center.