The American Academy of Arts and Sciences today announced the election of its new members for 2019, including two College of Arts and Sciences faculty members: Jennifer Crocker, professor in the Department of Psychology, and Lonnie Thompson, Distinguished University Professor in the School of Earth Sciences. They join more than 200 individuals, including former First Lady Michelle L.R. Obama and artist Mark Bradford, with compelling achievements in academia, business, government and public affairs who have been elected to the Academy.

“We are pleased to recognize the excellence of our new members, celebrate their compelling accomplishments, and invite them to join the Academy and contribute to its work,” says David W. Oxtoby, the president of the American Academy of Arts and Sciences.

Crocker is an Ohio Eminent Scholar in the social psychology program and studies self-esteem, contingencies of self-worth, and the costs of pursuing self-esteem as a goal. She joined the Ohio State faculty after serving as the Claude Steele Collegiate Professor of psychology at the University of Michigan. Thompson is a Distinguished University Professor in the School of Earth Sciences and a research scientist at the Byrd Polar Research Center. His research has propelled the field of ice core paleoclimatology out of the polar regions to the highest tropical and subtropical ice fields.

See the complete list of this year's new members. 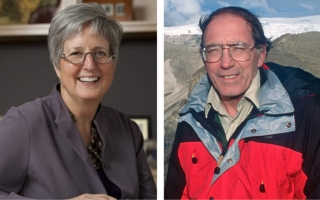