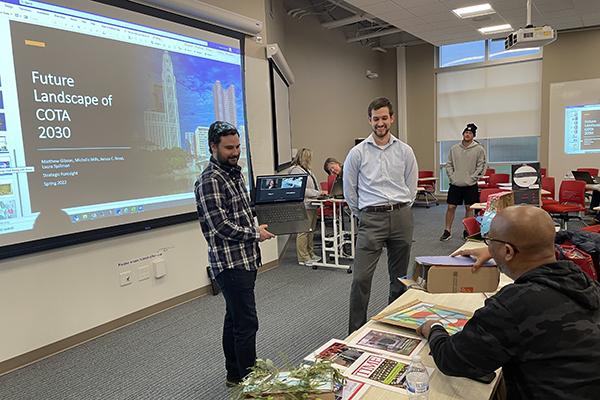 Central Ohio is only getting bigger.

The population of Columbus alone grew 15% between the 2010 and 2020 census, topping 900,000 people for the first time. The Mid-Ohio Regional Planning Commission is projecting central Ohio’s population to exceed 3 million by the year 2050.

Among many issues that accompany increased population — from housing and health care to employment and food — is the issue of transportation. When all those people live in the Columbus of the future, how will they get from Point A to Point B?

That question faces Otterbein University MBA students who are on a design thinking track led by Mercè Graell. Graell, who earned a master’s degree from Ohio State’s Department of Design in 2009, asks her students to look 5-10 years into the future to help see what lies ahead for public transportation in Columbus.

Using her decades of real-world design experience working for agencies as well as connections to the Central Ohio Transit Authority (COTA), Graell gets her MBA students to think in ways they might not normally have to in business school while they co-create with COTA on future customer experiences.

“What the students learn is how to understand their biases and assumptions when they think about the future,” Graell said. “People usually only see one way, which is the one that has worked in the past.”

Part of Graell’s goal in teaching that class is to get these MBA students to think outside the box for unconventional solutions to design problems. With that in mind, she brings in Ohio State Department of History Professor David Staley to give a guest lecture to her Otterbein class about the relative impact of technologies in changing the future ahead of us. Staley shows them that people’s behavior and adaptation will determine future outcomes, not the newest technologies.

An expert in design futures, Staley helps the students think about the changes that are going to come from things we can already see in our environment today.

“We’re very good at picturing the present,” Staley said. “‘This was designed to do X, so I can envision it doing X.’ Versus, ‘It’s designed to do X, and its effects will be Y, Z and 6.’ It’s a mentality that gets them to think about and anticipate change.” 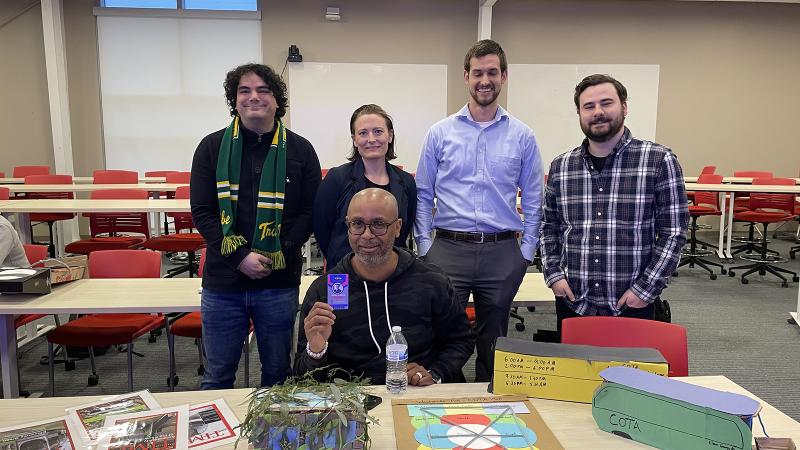 Graell herself is certainly used to change, both in her career and in her geography.

A native of Spain, Graell came stateside in 1999 because of a job change for her husband. She got work as a creative director for a company in the Dayton area, and that led to her being asked to teach at Sinclair Community College, also in Dayton. She enjoyed teaching so much that she knew she needed to pursue a master’s degree to continue that career trajectory.

To get that degree, she chose Ohio State’s master’s in design education program. She was immediately impressed with the breadth of offerings the university provided.

“The program, the beauty of Ohio State, it was a luxury,” Graell said. “If you needed to graduate with 90 credits, I did 130 or 140. Engineering, psychology, pedagogy, literacy studies. All over the place.”

She left Ohio State with her degree and immediately got a position as a Strategic Design Director at Designit, the international, Denmark-based strategic design consultancy firm. She arrived just in time for the boom of service design and business design, which are the systemic implications of design in businesses and organizations today.

“My master’s degree actually started this new paradigm in my life,” Graell said. “It created a career shift, that’s how transformative it was. … It created a good foundation to be able to work in new, emerging fields.”

In 2017, a new opportunity in the educational world arose for Graell when she was offered the chance to start a Master of Design program at the Columbus College for Art & Design. Three years later, when that program ended, she began teaching her three current courses at Otterbein.

For any Ohio State design students hoping to learn from her expertise, there’s good news ahead:

Graell will begin teaching a course in Ohio State’s Department of Design this fall. Aimed at second-year undergraduates, the class (DESIGN 3200) will be an introduction to design research that will also use Graell’s established relationship to COTA. Students will speak with COTA drivers as well as people who currently use public transportation to inform their projects for the course.

“Even when you’re thinking of the future, you need to understand first what is happening today,” Graell said. “You can use what happened in the past as a spring to the future.”

Her Otterbein students have already seen the benefit. In their class, using current data and the understanding of how systems work, they create multiple scenarios for the future of public transportation in Columbus ranging from optimistic to catastrophic. They consider contextual dimensions such as security, structures, the stigma of public transportation and competing types of transportation. With that in mind, they imagine and create alternative future scenarios where issues of accessibility, security and convenience, to name a few, are solved with central transportation hub ideas, on-demand public transportation or added services like grocery delivery. The students present conceptual prototypes to COTA that resonate powerfully with COTA’s mission to serve the community.

Staley believes that Ohio State could stand to think more about the designing the future. He says he gets funny looks when he talks about the future, as though it’s a strange idea. But outside of the university, he gets calls all the time from parties who are interested in knowing what’s next.

Staley also believes Graell will help with that future-thinking deficit on campus when she starts teaching her design class at Ohio State next semester.

“She brings real-world design experience to undergraduates. She’s worked with all sorts of companies around the globe,” Staley said. “Our students are going to benefit so much from that experience and the connections she can bring.”