Humans have long scanned the vastness of space in search of intelligent extraterrestrial life.

Though the pursuit of aliens has largely come up empty, one strange discovery recorded by an Ohio State astronomer in 1977 continues to baffle scientists and stoke imaginations that maybe we aren’t alone in the universe: the “Wow! signal.”

The Wow! signal was detected by Ohio State’s Radio Observatory (known as the “Big Ear” telescope), which surveyed the sky between 1973-95 for alien radio signals. The 22-year search is the longest-running Search for Extraterrestrial Intelligence (SETI) project in history.

On Aug. 15, 1977, the Big Ear picked up an inexplicably mysterious signal originating near the Sagittarius constellation. Volunteer astronomer Jerry Ehman, surprised by the numbers he saw on a computer readout detailing the intensity of the signal, wrote “Wow!” next to the finding, coining its name. To this day, the Wow! signal remains the strongest candidate for an alien radio transmission ever detected.

So what makes the signal so abnormal?

For one, researchers have long hypothesized that aliens would choose to communicate at a frequency near that emitted by hydrogen, since hydrogen is the most common element in the universe, said Molly Gallagher, a graduate research associate in the Department of Astronomy. The Wow! signal occurred at almost exactly this expected frequency and was about 30 times more intense than the surrounding noise level.

“Over the years, people have considered different theories,” Gallagher said. “It’s not a comet. There weren’t any planets in that area at the time; there were not any known asteroids in that area that could have reflected light. … So, it sticks around in popular culture and in the scientific mind because it hasn’t been explained.”

After the Wow! signal was detected, scientists scoured the skies with radio telescopes significantly more sensitive than the Big Ear to try and locate it again, but nothing was found.

The Wow! signal, it seems, has vanished. Its abrupt materialization and swift disappearance have added to its peculiarity, and as such, it is difficult to study.

“Nothing as far as understanding what it is or where it came from has ever really been discovered,” Gallagher said. “It exists as the lure of what might be aliens.”

And though the Big Ear was disassembled in the late 90s, the search for life beyond our planet hasn’t diminished.

Breakthrough Listen, part of the Breakthrough Initiatives founded by Yuri Milner, Mark Zuckerburg and the late Stephen Hawking, continues comprehensive SETI research. With $100 million in private funding, Breakthrough Listen is studying radio waves from our galaxy; one million of the nearest stars; and 100 of the closest galaxies for signs of alien life. The program began in 2016 and is set to run through 2026.

One tool used by Breakthrough Listen to search for aliens is the Green Bank Telescope (GBT) in Green Bank, West Virginia, which a group of Ohio State astronomy and physics students visited last spring.

Located away from civilization within the National Radio Quiet Zone, the gigantic, 485-foot-tall telescope is used to measure a vast array of objects and phenomena in outer space, from supermassive black holes to signs of extraterrestrial intelligence. It does this by observing radio frequencies from space, which are emitted by various things like galaxies, neutron stars and star-forming gases.

If aliens exist and are trying to contact Earth, the GBT would pick up the transmission. But when it comes to the question, “Was the Wow! signal a sign aliens are out there?” the case remains unsolved.

“There’s no explanation I’ve ever seen that I believe,” Gallagher said. “It doesn’t mean it couldn’t be aliens. Honestly, I would say I don’t know. It’s a mystery, and perhaps it will always be a mystery.”

A signal detected at Ohio State in the 1970s remains the strongest candidate for an alien radio transmission ever recorded. #ASCDaily 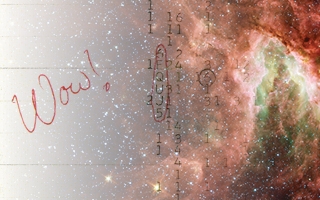