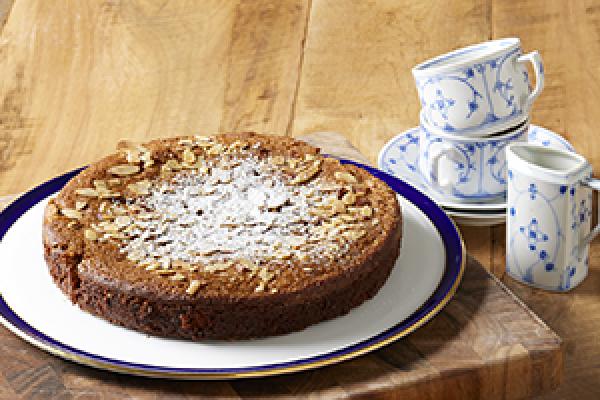 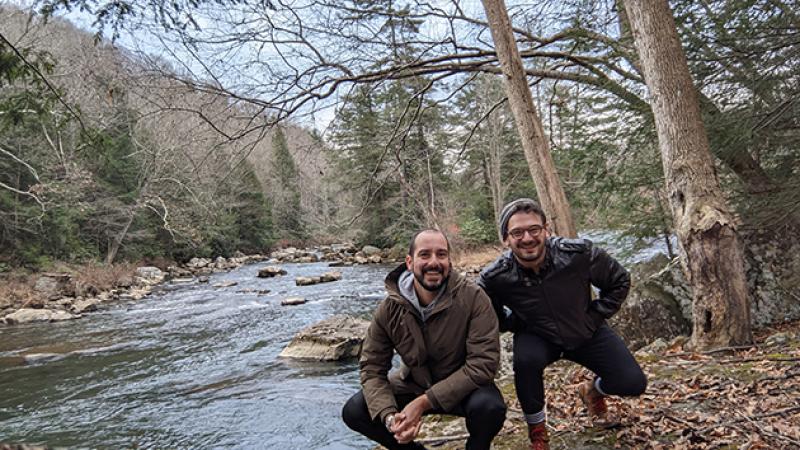 Philip Gleissner (left) and Harry Kashdan on a retreat in Friendsville, Maryland, to finish writing their chapter of their forthcoming book.

Gleissner is an assistant professor in the Department of Slavic and East European Languages and Cultures who studies migration. Kashdan was a postdoctoral scholar in the Department of French and Italian researching cookbooks and the Mediterranean. Both had active grant submissions paused as the pandemic spread.

But the two friends — who came to Ohio State as part of the same program — decided to turn that frustration into the start of something new. Using new funding opportunities that became available during the pandemic, they combined their areas of interest into a project detailing how COVID-19 impacted eating habits in the United States.

“As we were reading all this news coverage, it seemed really clear to us that food and migration were two of the major ways in which Americans were confronting the very first impacts of COVID-19,” said Kashdan, who is now a postdoctoral fellow at the University of Pennsylvania. “It seemed like an incredible opportunity to collaborate and marshal our dual areas of expertise.”

Their collaboration, which is ongoing, resulted in two distinct parts aided by funding from the Global Arts + Humanities Discovery Theme’s COVID-19 Special Grants Initiative. First, the pair is editing and contributing to a book with a focus on the immigrant community that is set to come out in 2023. The volume features essays from renowned immigrant chefs, activists and scholars in the food industry and is called “Resilient Kitchens: American Immigrant Cooking in a Time of Crisis.”

The second part of the project is The COVID Food Archive, a website where visitors are encouraged to submit their own recipes, images and stories that document how their relationship with food changed during the pandemic. Visitors to the site — which was designed by the Advanced Computing Center for the Arts and Design — can interact with existing submissions, view photos, read stories and even try their hand at cooking others’ family recipes.

“We figured, well, everyone knows how to post food pictures on Instagram all day, so why can’t they contribute for this?” Gleissner said. “So, for years to come, we will have this rich record where people simply talk about something very uncomfortable like COVID, but they talk about it through food.”

Gleissner and Kashdan came to the project from disparate backgrounds. A native of northern Germany, Gleissner says food played very little role in his upbringing. To him, food was eaten in modest quantities and wasn’t given much thought beyond being a necessity. It wasn’t a large part of his culture. After experiencing his own sense of foreignness when he arrived in the United States in 2011, his interest in immigration as an academic subject was solidified.

Kashdan, on the other hand, had a very strong food culture growing up. Raised in a Jewish household with a mother influenced by her own history in the American South and a father who was inspired to broaden his culinary horizons while living in Taiwan, holidays and family gatherings were centered on the meals that came along with them. He began cooking for his family four nights a week while in college, a ritual that began a process cementing cookbooks as his area of study.

Those personal experiences are reflected in the forthcoming book. In reaching out to immigrants in the food industry, Gleissner and Kashdan sought essays that showcased food culture during the pandemic in ways that were personal to the authors. They hope the book will amplify immigrant voices that often go unheard, and they hope recipes presented alongside the essays will inspire readers to do some cooking of their own.

“You can read an article about the communal practice of eating Palestinian stuffed cabbage and how communal eating was disrupted, and then you can go to your own kitchen and cook it,” Gleissner said.

Besides editing the volume, Gleissner and Kashdan also contribute a combined essay that shares their backgrounds with food and details how their personal relationships changed during the pandemic. Despite spending most of the pandemic apart, the two spent a weekend in the appropriately named Friendsville, Maryland, to write their chapter — and cook — together.

Some of their own cooking is also reflected in the COVID Food Archive website. The first submission to the website, in fact, was a duck they cooked together in 2021. With that as a starting point, they’ve grown the archive and encouraged submissions from visitors ever since.

People who reach the website today can see recipes for items as simple as chocolate sauce and as complicated as a Greek Easter feast for seven people. Complete with photos and instructions, the submissions have short stories that open a window into the submitter’s life during quarantine.

There have been a few surprises in the submissions so far, including how willing people have been to share “secret” family recipes from cultures with strong traditions of guarding them. But they see the archive evolving over time as more people look through their photos from 2020 and add to it.

Over time, they see the archive as a window into a distinct time that will be educational for researchers, professors and students in the future. But they also hope the website can serve as an example for other archives.

“We want this to be a model for others,” Gleissner said. “There are a lot of culturally relevant kinds of information that can be collected this way.”