What frightens you, tingles your spine, gives you that isolating sense of dread?

For some, it’s monsters — grotesque creatures that are unnatural yet unnervingly human. For others, it’s the supernatural — old ghost tales and haunted mansions with dark, decrepit pasts. Other terrors take more realistic roots — true crime legends and psychological fears that often blur the lines between fiction and reality.

“Everyone is scared of something,” says Rachel Stewart, fourth-year English student, research assistant at the Thompson Library and horror literature aficionado. “We are drawn to it, and we want to explore it — even if we don’t want to face our fears.”

Stewart, whose senior thesis takes a scholarly examination of vampires, recently curated a selection of horror literature and films on display and available to be checked out on the first floor of Thompson Library. Her selection of terrifying tomes encompasses various eras and authors. Classics such as Bram Stoker’s Dracula and Mary Shelley’s Frankenstein give way to more contemporary novels like Shirley Jackson’s The Haunting of Hill House and Stephan King’s Cujo.

Stewart’s frightening fiction collection also spans different themes. Horror literature often has underlying subtexts that comments on societal issues and the human condition. The scholarship of the horror genre and the ways different works can be dissected and examined is something that has always fascinated Stewart.

“Horror speaks to a lot of cultural anxieties and fears,” Stewart said. “So I wanted it to be a mix of that as well so people can see this and say, ‘Hey, there is actually really important stuff being said by a lot of these.’”

With the Halloween season approaching, here is a quick list of books Stewart recommends to give you the chills.

They’re the classics. I would recommend them to everyone because of their longevity and the interesting things going on there.”

The Haunting of Hill House (1959) by Shirley Jackson

People know her name, but maybe they haven’t actually delved into her or read her work, which is older but still very accessible and still holds up very well.”

Junji Ito writes incredible horror, and it’s visual because it’s manga — like a graphic novel. The whole series deals with spirals, which you don’t immediately think is a very terrifying thing, but the ways he makes the spiral an analogue to so many different things is fascinating. I would not recommend it if you have a weaker stomach because it’s very gruesome and very visual horror, but it’s incredible.”

It’s science fiction, but I would also call it horror because it deals with body horror and the science fiction of you becoming nature and your body mutating as a result of nature, which I think is really interesting.”

Her Body and Other Parties (2017) by Carmen Maria Machado

It’s a very modern short story collection that deals a lot with feminist and queer horror, and it’s fantastic. I think that might be my go-to because that’s what I think is the most accessible. It’s newer stories, so that would be my No. 1 recommendation if you want to dip your toes into horror.” 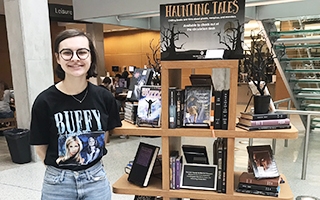