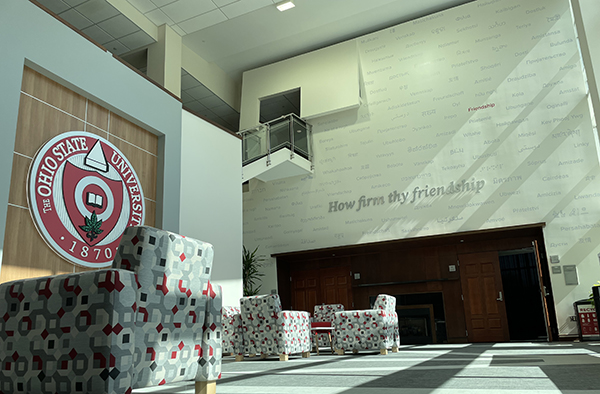 The Ohio State Alumni Association was planning to renovate the lobby of its Longaberger Alumni House, and the association’s leadership knew they wanted to include a nod to diversity and inclusion in the new design.

Molly Ranz Calhoun, president and CEO of the Alumni Association, drew inspiration from another project she had been working on in her role as an Ohio Stater.

The Global Carmeny project aimed to translate the first verse of Carmen Ohio into multiple different languages and display it at the Ohio Union. She knew the lyrics to Carmen Ohio could inspire and engage current students as well as alumni.

“From my personal experience, having been here for 35 years now, it’s always meant something to me as an alma mater,” Ranz Calhoun said. “It’s powerful. The words are really important.”

And in a building called the “Alumni House,” she also knew she wanted to make it feel more like a home for alumni when they were visiting Ohio State’s campus. Before, it could have felt like a campus building anywhere in the country.

Thanks to meticulous translation and information gathering work previously done by the Center for Languages, Literatures and Cultures (CLLC), the alumni house now features 141 translations of the word “friendship” in its lobby. “Friendship,” a key word in the final line of Carmen Ohio’s first verse, is patterned in French, Italian, Spanish as well as more rare languages spoken on the Ohio State campus.

“People are able to see themselves in those languages,” Ranz Calhoun said. “Since the building has been open on football Saturdays, a lot of people are asking questions about it. It’s been fun to be able to share what the wall means.”

Rebecca Bias, CLLC’s assistant director, was part of a CLLC team that was vital in completing the University Square project on 15th Avenue and High Street. Her group shared its results with the alumni house, allowing a third area of campus to share the emotions of Carmen Ohio in multiple languages.

“It has evolved into three projects that involve Carmen Ohio and friendship across the campus,” Bias said. “It’s absolutely beautiful.”

Tim Gerber, a professor emeritus in the School of Music, was crucial to the initial conception of the project on 15th and High. After working through the process with CLLC, he was happy to discover the coincidence of Ranz Calhoun’s project that led to the Alumni House sharing the translations. 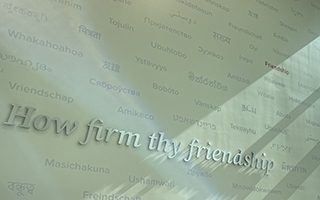