A physicist's 'strong interaction' with a new particle accelerator

By using the Electron-Ion Collider to slam an electron into a heavier particle such as a proton or atomic nucleus together, as depicted in this animation, physicists will be able to answer some of the most fundamental questions about our universe. Animation courtesy BNL.

It’s called the Electron-Ion Collider (EIC), and the U.S. Department of Energy (DOE) recently announced it will construct and house the particle accelerator at Brookhaven National Laboratory in Upton, New York.

By colliding tiny electrons with relatively larger particles such as protons or nuclei, the EIC will help nuclear physicists unlock the mysteries of one of the field’s fundamental forces, the strong force, which binds atomic nuclei together. 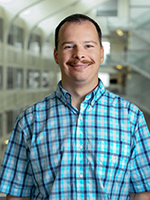 Yuri Kovchegov, professor in the Department of Physics, has long wondered about the unknowns of the strong force, and for him, the DOE’s decision marks a major transition in the machine’s development and is the first concrete stage of its completion.

“It’s a major step,” Kovchegov said. “The machine finally became somewhat real — from just a proposal to something with a stamp of approval from the Department of Energy.”

Kovchegov, a theoretical physicist, has been closely involved with the EIC’s planning for nearly a decade. From 2011 to 2014, he was one of the lead authors of the EIC White Paper, which explored and summarized the various ways the physics community can benefit from the proposed EIC’s capabilities.

In 2018, the Electron-Ion Collider User Group, which consists of over 1,000 physicists from around the world, selected Kovchegov to lead a seven-week workshop at the Institute for Nuclear Theory in Seattle. The workshop brought together over 100 physics theorists and experimentalists to propose new experiments that could potentially be performed at the EIC.

Most recently, Kovchegov was elected an affiliate member of the TMD Collaboration, an organization of physics researchers funded by the DOE dedicated to understanding proton structure and the strong force that permeates and influences it.

“The theory of nuclear physics has existed for over a century,” Kovchegov said. “A lot of 20th century geniuses and outstanding physicists have thought about this strong force problem, and we still don’t completely understand these nuclear interactions.”

To understand how the EIC will work, it’s important to understand the basics of proton structure. A proton is made up of three quarks — two “up” quarks and one “down” quark. These quarks are held together by gluons, which are thought to carry the strong force. 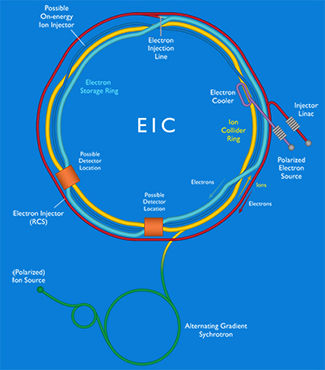 The EIC is slated to be completed in 2030 and will make use of current infrastructure and technology that comprise Brookhaven National Lab's Relativistic Heavy Ion Collider. It will consist of two overlapping accelerators — one generating a beam of electrons at super-high speeds and the other a beam of heavier protons or nuclei. The two beams are then steered into each other, allowing the smaller electrons to penetrate the larger particles and allowing scientists to achieve a clearer picture of the quarks and gluons within.

Scientists who study the aftermath of these collisions, which will achieve a never-before-seen intensity, will be able to see glimpses of the building blocks of the universe. For Kovchegov, he will be able to learn if the equation he formulated — the Balitsky-Kovchegov equation, which seeks to understand how the matter inside protons is held together — is valid.

“Part of the excitement is we’ll have a chance to see whether or not [the equation] works or how well it works when the machine turns on,” Kovchegov said. “We still don’t have a clear picture of how quarks and gluons are distributed inside the proton. … It’s very exciting to be a part of this research answering these very fundamental questions about how the world around us is built.” 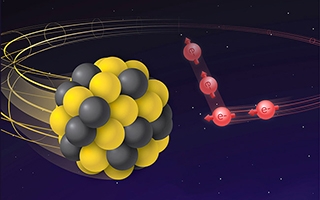