When the United States ended the draft and moved to an all-volunteer military in 1973, most political and military leaders assumed that the nation would reactivate the draft in the event of another major war. Instead, the U.S. fought long and costly wars in Iraq and Afghanistan with an all-volunteer force.

Today, the U.S. military has a truly global presence, with roughly 200,000 troops deployed at any given time in about 170 countries.

How well has this military model worked, and will it work in the future? Is it fair, efficient and sustainable?

On March 29, the Mershon Center for International Security Studies will host a symposium exploring these questions with input from national policymakers, military officers and academic experts. Students attending the conference will be asked to break into working groups to discuss the issues raised and generate solutions, which they will present to a panel of experts.

Rick Herrmann, Arts and Sciences Distinguished Professor and chair of the Department of Political Science, sheds some light on some of the pressing topics that will be discussed at the event.

Why did the U.S. move to an all-volunteer force?

The U.S. abandoned the draft in 1973 due to the mounting unpopularity of the Vietnam War, moral and economic objections, a lessening demand for manpower and a general desire for change.

When did the idea of conscription first originate?

The idea of a nation state, where people from the society fight for the country, is a relatively modern idea and it really comes from the French Revolution and Napoleon’s success of selling the idea of a French nation. The troops he was able to mobilize in France around the ideas of liberty, equality and fraternity — they fought harder. They seemed to have more motivation than the armies of other regimes that were still fighting for kings, emperors and tsars. The people who founded democracies believed there should be a close connection between citizens and the common defense.

What are the arguments for keeping an all-volunteer force?

It promotes professionalization in the military and longer-term training. It does not compel people to serve in the military who don’t want to, though men between the ages of 18 and 25 are still required to register with the Selective Service System should there be an emergency. It provides people more freedom of choice.

What are the arguments against an all-volunteer force?

Less than 1 percent of the nation’s population is active military personnel. It’s much more expensive to induce volunteers, and even more expensive to induce the talent level currently sought. What experts are saying is that the current system is very expensive and probably not sustainable unless we reduce the demand on these people, who don’t have enough resources to do all they’re being asked to do as regularly as they’re being asked to do it. In addition, the burden is not shared equitably and affects lower income groups more than wealthier ones.

Would you say this is a partisan issue?

No. One of the main problems with this issue is that it’s not perceived to be a problem. If we were doing this conference on immigration or “Me Too,” everybody would know what the issue is. This is a complicated issue and it’s not on most people's minds.

How has the U.S. military changed in nature since moving to a volunteer model?

It’s more professional, and for many it’s become a career. It also might be a community unto itself. Is it deeply integrated in the fabric of our democracy, or is it more like a community of its own people? This is a question we’re going to heavily explore.

What are some alternative options to conscription or an all-volunteer force?

There are various ways to combine aspects of both of these, and we could imagine other types of service, such as civilian reconstruction and development teams adding capability to the Department of State, USAID or the Peace Corps. Quite a few jobs military personnel are doing abroad are not traditional war fighting and might be done as well, or better, by civilians. We already partly rely on private contractors for some aspects of national security and could increase that. It’s also possible that new technologies like robots and drones will offset some of the demand for troops. Of course, another whole range of solutions appears when we consider revising the commitments the country takes on.

How do the U.S. Armed Forces compare to other armies around the world?

I can’t think of any major democracies that still are using a draft. So we’re normal in that regard. The military role that we play in the world, though, is very different. The budget and power of the U.S. military dwarfs everybody else by many times.

How is this symposium an appropriate venue to explore this subject?

It seems like a very opportune time to think about this with a campaign slogan of “America First” that you hear constantly. There have been a lot of injured veterans coming home. We see them at every football game; every basketball game — every part of society is sort of aware of this. At Ohio State we have more than 1,000 veterans on campus.

This conference is co-sponsored by the Mershon Center and the John Glenn College of Public Affairs, and is part of a series of national events held by the All-Volunteer Force Forum, a network of national security experts, military officers, academics and concerned citizens established to examine the all-volunteer force and democracy in America. 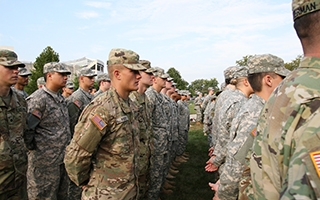