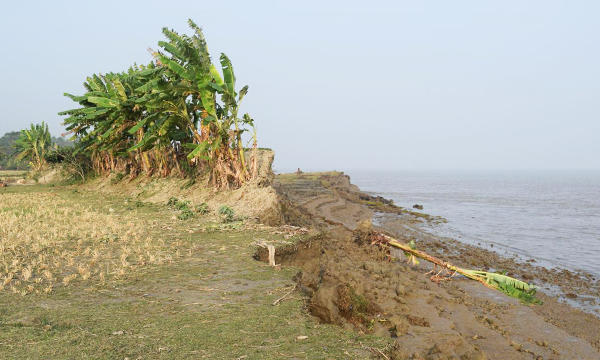 An eroded rice field alongside a river in Bangladesh.

In some regions, climate change is seen as a concern for future generations. But in the South Asian country of Bangladesh, rising sea levels, increased frequency of extreme weather and other impacts related to global warming are causing a migration crisis for the entire region.

“Bangladesh, one of the if not the most densely populated coastal nations in the world, is the poster child for the adverse effects of climate change with seasonal floods, droughts, cyclone-induced storm surge and floods, saltwater intrusion ... (and) the threat of sea-level rise, exacerbated by rapid sinking of land,” said C.K. Shum, professor and Distinguished University Scholar in the School of Earth Sciences.

The climate crisis in Bangladesh and its deepening threats for people in the country illustrate the underlying connections between global warming and the security of a nation and its people. Increased recognition of that link has produced a growing field of research within security studies to understand the impacts of global warming on socioeconomic and political systems.

This brand of cross-disciplinary collaboration has become a cornerstone of the Mershon Center for International Studies.

“Scholars and the public often think of international security as strictly a military or diplomatic question and mostly focused on what the U.S. government does in foreign affairs, which of course is central,” said Professor Emeritus and former Director of the Mershon Center Craig Jenkins. “We add to that consideration of broader social, political and environmental dynamics that present challenges to international security.”

Internationally, I expect to see more climate migration in the coming years,” Chen said. “Many of those migrants likely will not come to the U.S. directly, but the possibility of international conflict will likely increase, particularly where climate change has larger negative effects on the economy."

In 2019, the Mershon Center released its five-year strategic plan, which renewed emphasis on security and governance through interdisciplinary research and holistic study. In the plan, questions like how environmental dynamics might affect socioeconomic and political processes relative to the U.S. and other foreign policies have become a prominent new aspect of the center’s research. Ohio State professors with backgrounds in economics, Earth sciences and sociology have found common research interests exploring those connections under the umbrella of climate change and forced migration. 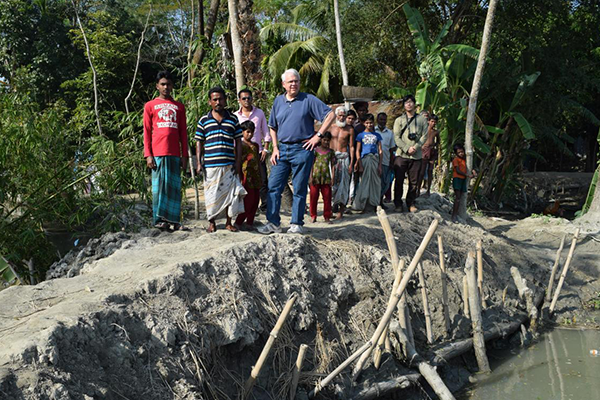 Craig Jenkins standing alongside a temporary repair in an embankment that protects 5,000 people's homes.

Shum, along with Jenkins and Joyce Chen, an associate professor in the College of Food, Agricultural, and Environmental Sciences with a courtesy appointment in the Department of Economics, are doing just that with their research exploring environmental vulnerability and human migration. The team used this broad definition of international security studies to look at climate migration and security in Bangladesh.

Their research studied climate change-related vulnerabilities in coastal Bangladesh that have resulted in sea-level rise, natural hazards, food and water resources scarcity, and climate migration. As Bangladeshi people start experiencing the effects of climate change on their agricultural industries and economy, solutions such as migration start to impact the social and political realities of neighboring countries like India.

“When we think about migration as adaptation, mobility and immobility should be seen as two sides of the same coin,” Chen said. “Mobility means opportunities exist elsewhere, but immobility means adaptation is feasible at home. In both cases, we may still find that people remain just as vulnerable to climate risk, even if they’ve managed to delay the worst. That is where researchers and policymakers can work to help create better long-term solutions.”

Three maps show 18 million people would be affected and 22,000 square kilometers of land submerged by flooding in Bangladesh if sea levels rise by 1.5 meters. Source: GRID-Arendal by Philippe Rekacewicz.

The impacts of climate change and forced migration are found in areas outside of Bangladesh as well. In Central America’s “Northern Triangle” — El Salvador, Honduras and Guatemala — the effects of climate change have been significant. Drought, unpredictable rainfall and drastic temperature fluctuations hurt agricultural production in the region and the communities relying on those resources for survival. These issues lead to forced migration, exacerbating additional issues, including the U.S. border crisis.

“Internationally, I expect to see more climate migration in the coming years,” Chen said. “Many of those migrants likely will not come to the U.S. directly, but the possibility of international conflict will likely increase, particularly where climate change has larger negative effects on the economy. However, we could also see more conflict in areas with little migration, as those who are unable to resettle in new areas feel a greater need to protect increasingly scarce local resources.”

Shum said Bangladesh is a prime example of why researchers across disciplines, including those at Ohio State, need to work together to study the susceptibility of communities in at-risk areas. Rising sea levels and coastal vulnerability in Bangladesh impacted more than just the country’s agricultural yield; they have dramatically altered lives throughout the country.

As the migration crisis in Bangladesh demonstrates, climate change doesn’t stick within the boundaries of one field of study. Its researchers can’t either.