Coral reefs, dynamic underwater ecosystems made up of thousands of corals and other marine species, play an essential role within and above the sea.

They are vital to a quarter of marine life — providing shelter, food and other nutrients for countless species — yet cover just 0.2% of the ocean floor. They mitigate wave action, protecting coastlines from damage inflicted by tropical storms. When factoring in tourism and fishing industries, the global economic value of coral reefs is estimated at $9.9 trillion per year.

But because of climate change, coral reefs are dying. An increase in atmospheric carbon dioxide levels causes ocean acidification, which can impede and sometimes stop skeletal growth. Plus, as oceans warm, coral eject algae living in their tissue, causing coral bleaching, a symptom that can lead to mortality. That coral bleaching is the single largest threat to coral reefs for the next few decades.

A global environmental issue requires a global response, and the importance for scientists to be efficient and synchronized in their research efforts cannot be understated. Earth Sciences Professor Andréa Grottoli is tasked with making that happen.

Grottoli is the director of the recently formed Coral Bleaching Research Coordination Network (CBRCN). Funded by the National Science Foundation, the CBRCN is an interdisciplinary team of coral scientists who work together to develop best practices and experiment protocol recommendations to make their research more efficient and improve the rate of coral bleaching discovery.

“Bleaching is killing coral reefs, and we don’t have a lot of time,” Grottoli said. “If we can coordinate our efforts by developing best practice recommendations, it can help shape how we do the science and help us better compare it between experiments and products.” 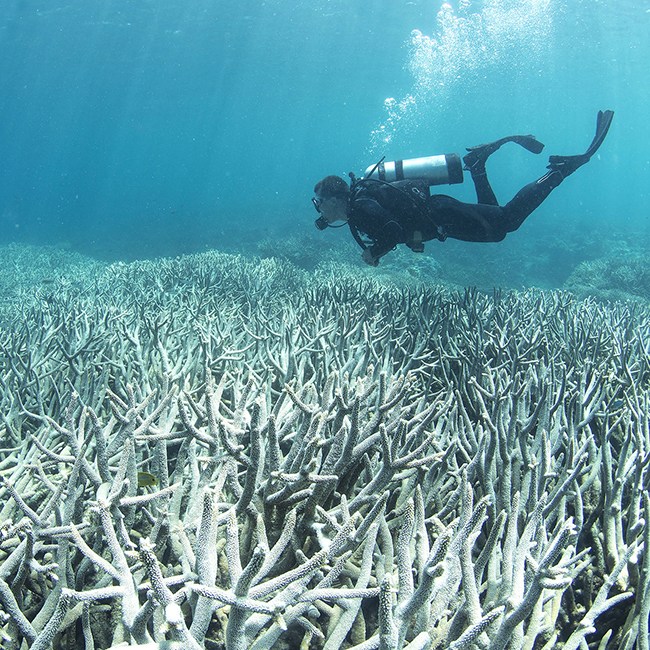 A diver observes coral bleaching off the coast of Australia. Photo credit: The Ocean Agency.

The first of three CBRCN workshops was held at the School of Earth Sciences last May. Twenty-seven coral scientists from around the world converged at Ohio State to develop coral bleaching experimental design protocol recommendations and establish a baseline of variables to include in all studies, to facilitate comparisons studies and move the science forward, faster.

The workshop was successful, Grottoli said, and the group plans on writing two papers set to publish later this fall. One details how previous experiments were conducted and identifies recurring themes and gaps in research. The other shares the group’s recommendations with the greater scientific community. Grottoli also plans to produce a webinar that summarizes the workshop’s conclusions.

“One thing that really surprised us was how much we were all in agreement about what needed to be done and where the gaps were,” Grottoli said.

CBRCN’s second workshop is July 1-3, 2020, in conjunction with the 14th International Coral Reef Symposium in Bremen, Germany. The workshop will focus on developing recommendations for archiving samples from existing and planned experiments. The final workshop is June 2021 at Ohio State and concentrates on developing best practice recommendations for synthesizing data gathered from experiments.

CRBCN’s impact on coral research doesn’t stop with the workshops. Through the network’s Early Career Training Program, PhD students and postdocs will have opportunities to learn new techniques and approaches to coral bleaching research from different laboratories and universities.

“The program is designed to give applicants a chance to learn a new skill outside of what they were trained to do so they can foster collaboration outside their immediate area of knowledge,” Grottoli said.

The idea for a coral bleaching network was formed in 2016 during a meeting of coral scientists at the 13th International Coral Reef Symposium. When Grottoli was approached to develop the CBRCN and direct the network, she couldn’t say no.

We need to move the science forward faster and more efficiently so we can make a difference before coral reefs are gone,” she said. 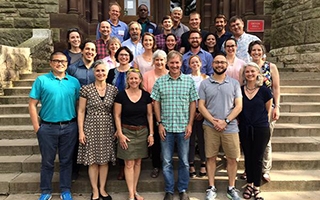