An animator and filmmaker of uncommon empathy and creativity, Chris Landreth visits Ohio State Jan. 17 and 18 as The Advanced Computing Center for the Arts and Design (ACCAD) artist-in-residence for the Humane Technologies project — a segment of the university's Humanities and the Arts Discovery Theme that is exploring how to improve our everyday relationships with technology through artist-led research.

While here, Landreth will engage with ACCAD on current research in humanities and the arts, seed future research and lead a workshop for advanced animation students from Ohio State, Bowling Green State University and Columbus College of Art and Design. He will also visit the Wexner Center for the Arts on Thursday, Jan. 18, for a free, public screening of several of his short films followed by an audience Q&A (reserve your spot here).

A recipient of multiple honors — including an Oscar for his breakthrough 2004 animated short Ryan — and the progenitor of Making Faces, a groundbreaking course on facial animation, Landreth is one of the most influential animators working today. 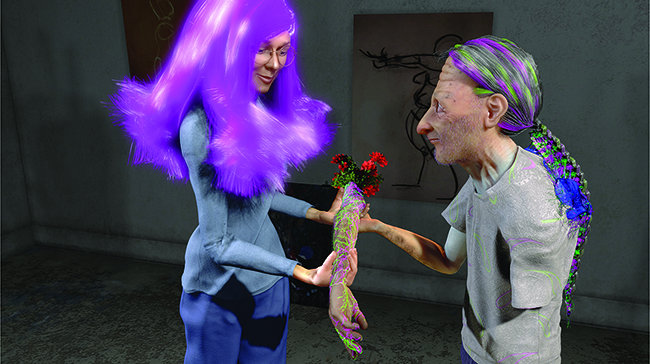 A still from Landreth's 2009 short film, "The Spine." Image courtesy National Film Board of Canada.

In advance of his visit, Norah Zuniga-Shaw, professor and director of Dance and Technology and the principal investigator for Humane Technologies research, spoke with Landreth about his work.

Norah Zuniga-Shaw (NZS): I’m excited to talk with you about your upcoming residency at OSU/ACCAD and what “humane” might mean in relation to your work. First and foremost you are a storyteller, and the stories you tell are humane in the way you use computer graphics to reveal people’s inner lives. You address issues of addiction, marital dysfunction and grief in your work in nonjudgmental ways.

Chris Landreth (CL):  You’re talking about The Spine and Ryan, probably. My ultimate goal is to tell a really great story, and the best and easiest way to tell a really great story is to tell it with empathy. In order for the story to succeed, I have to create a sense of empathy for the audience to have a way into the stakes of the story. The nice thing that comes out of that — at least I hope — and I’m glad that you picked that up, is that there is a sense of compassion and caring.

NZS: Help me think this through some more. I see your work as revealing rather than smoothing over the ugliness and awkwardness of human experience — a theme that keeps coming up with artists involved in this project. Perhaps unfiltered experience is part of being humane.

CL: When I was starting to get into CG [computer graphics] in the 1990s, I was seeing a lot of what has been borne out today. People love to use realism to make fantasy and superhuman-ness, and that’s what I’d say you see way too much of — the pursuit of photorealism, the idea of being able to re-create reality in a way that is substitutable for real life. The tools that are available with computer animation can do a lot more than that. I was really into the idea that you could use the same kind of visual storytelling to elevate the ordinary stories of ordinary people. The ordinary stories of getting up and negotiating the world and going to sleep and not having destroyed yourself in the process are actually kind of heroic. If you can show that ordinariness as heroic then you start creating a sense of empathy. I’m surprised that more people don’t pick up on this. It is a really powerful tool for storytelling.

NZS: How would you trace the origins of your interest in this kind of work?

CL: When I was a kid I was diagnosed with severe attention deficit disorder, and that affects my outlook. It is easy for me to screw up on ordinary things — like in my film Subconscious Password — to forget someone’s name. There’s always a bit of that forgetfulness. On a day when I don’t forget where I put my glasses, and my glasses are actually where they are supposed to be, it feels like a huge triumph. It is a spectacularly happy ending to that story. Those ordinary things, like remembering a person’s name, are actually pretty epic stories and people can relate to that. With CG we are able to take the ordinariness of human experience and turn it into something extraordinary.

We are all broken in some way or another. That’s what makes us people, it is the breakages that we have. If we are able to portray them visually I think we have an interesting way of showing people and storytelling. 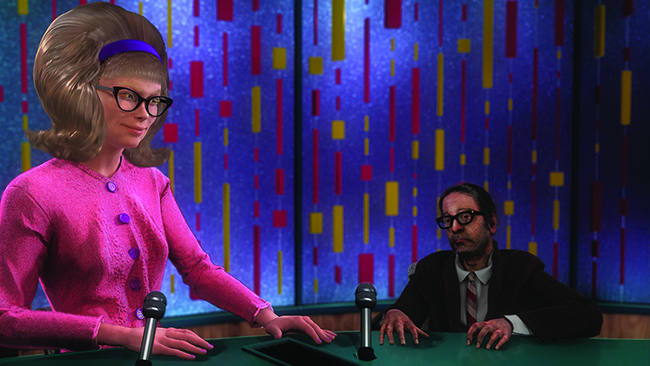 A snapshot from "Subconscious Password" (2013), courtesy National Film Board of Canada.

NZS: Is there a danger to potentially starting with empathy in storytelling?

CL: I don’t think you can tell a great story if you’re making empathy your goal, instead you [should be using] empathy to make the story powerful. In narrative films in which you are telling the story of a character, you want to have your audience inside that person’s head. It is not easy to do.

NZS: Let's take a moment to talk about the visual style that you are known for: psychorealism. Can you talk about psychorealism and how it might relate to a notion of using technology toward compassionate ends through artistic practices?

CL: Essentially, the idea is that you can portray people’s psychological states in an interesting visual way that integrates with other visuals happening in the film. I’m interested in altering characters’ appearances to create a metaphorical psychological state that you can see literally on their faces and bodies. This brings us back to where we started: I do this because I think it is a really useful device in telling stories. I’ve found that by creating a visual alteration that reflects peoples’ inner lives, there is a new layer of storytelling that takes what otherwise might be mundane and common and creates something beautiful out of them

NZS: In virtual reality (VR) or mixed reality (MR) there may be some different potentials, given the effect that being in goggles has on the brain. When you step off a cliff in VR, you have a moment of fear of falling. That has great potential for good but also for manipulation. There are many projects that assumed VR would be good for building empathy and they have really failed. Immersion doesn’t equal empathy.

CL: What’s being missed in thinking about immersion as empathy is that it isn’t automatic. When The Hobbit played in theaters it was not only 3D, but it was shown at 60 frames per second to create a sense of total immersion. The idea is that you’re actually there inside the Shire, in Middle Earth. But it had exactly the opposite effect with audiences.

You’ve heard of the soap opera effect? With film, there’s a filter of cinema that you’re accustomed to. When you have 60 frames per second you don’t have that motion blur anymore, and it turns out that doesn’t work well. When you’re looking at The Hobbit you’re not thinking you’re in Middle Earth, you’re thinking that you’re on a movie set for Middle Earth ... You’re immersed in the wrong thing.

NZS: It is hyper-real.

CL: A lot of my future work is going to be involved in VR. The thrust of my work in the past few months has not been in filmmaking but in software development with a small group of folks at the University of Toronto. We are developing software that will allow CG characters to be able to speak based only on an audio file of a person saying or acting lines, and the applications are vast — definitely in gaming and definitely in VR.

NZS: I’m looking forward to absorbing all of this at once in the screening of your works. We are honored to have you here for a residency.

CL: I love the idea of coming out there. ACCAD has been out there doing great work for what, like 35 years, and people there have done some really great pioneering work on not just the aesthetics but the technical pipeline of computer graphics. A lot of powerful stuff has come out of OSU and ACCAD over the decades. 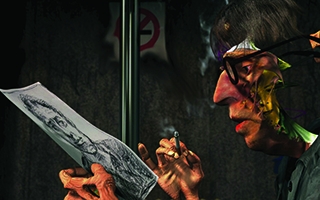