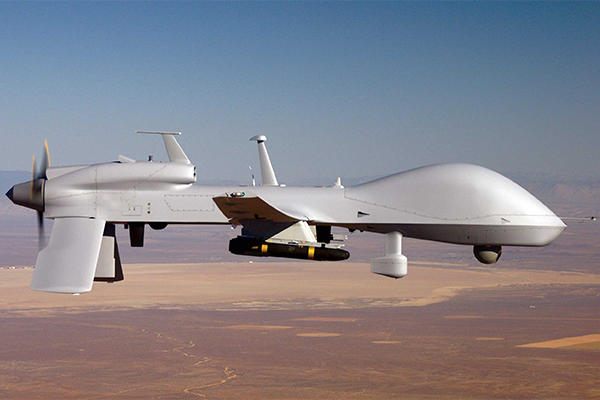 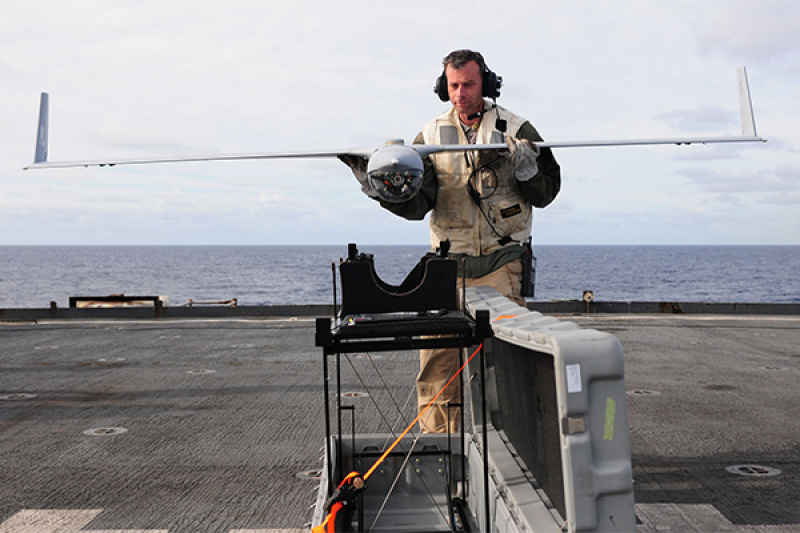 An Scan Eagle operator places the unmanned aerial vehicle on its stand aboard the USS Comstock. Photo credit: U.S. Navy.

As skies become more crowded, advancements in drone technology are making unmanned aerial vehicles (UAVs) more agile and secure. At the forefront of these innovations is the Columbus start-up Asymmetric Technologies with its Ohio State partner researchers Dan Gauthier, professor of physics and electrical and computer engineering, and Matt McCrink, research scientist in the College of Engineering.

Gauthier and McCrink, along with Jay Wilhelm at Ohio University, are collaborating with Asymmetric Technologies to further develop the company’s IronClad Secure Flight Controller technology. In June, the project was awarded $1.5 million from the Ohio Federal Research Network (OFRN) and recently received a second round of funding from the U.S. Air Force after successful demonstrations in November.

“To fly a drone, you need two pieces,” Gauthier said. “You need the small computer that can fit within the drone, ... and you need software that can run on the computer.”

The IronClad Secure Flight Controller technology incorporates both hardware and software components. While Asymmetric is focused on building the computer hardware, McCrink and Wilhelm are developing software to provide more agile control of drone flight and strengthen collision avoidance between a drone and other aerial vehicles.

But there’s one other innovation that separates Asymmetric’s model from the competition.

“The other thing that the Asymmetric computer does that’s very different from any others out there is that it uses cryptography to secure all the information on board,” Gauthier said.

Cryptography is the process of encrypting and decrypting information, or scrambling data using an algorithm so it’s only readable by authorized parties. Currently, it’s common for companies to encrypt information transmitted between the drone and a ground station. However, few encrypt the data actually residing on the drone, making any sensitive information on board vulnerable to bad actors if the UAV fell into the wrong hands.

I'm really excited about taking some of these technologies that seem like they're at the right place at the right time and commercializing them,” Gauthier said.

That’s where Gauthier comes in. He’s working on a new method for encrypting information that makes the data stored on the drone tamper-proof. Asymmetric Technologies already encrypts on-board data, but the process relies on storing a “private key,” which acts as a password for decrypting the information, on a memory chip in the drone. 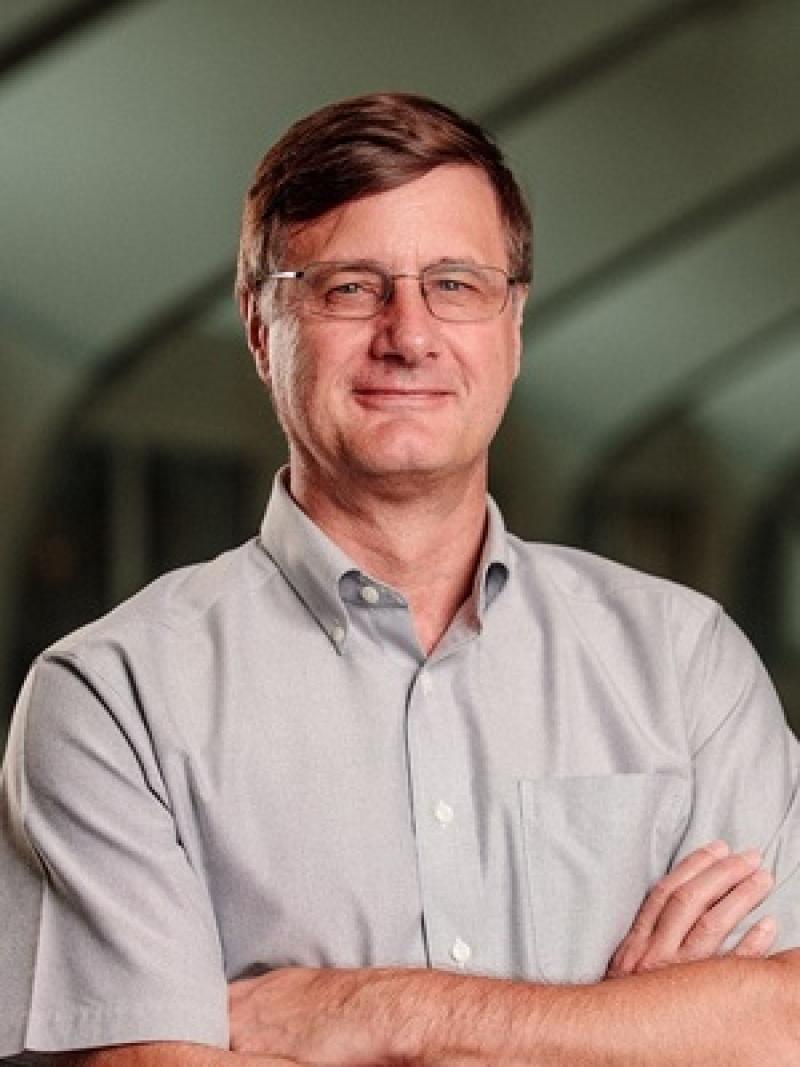 “The problem is that someone who has a lot of money can take a chip with a stored private key, pop the top off and then take a very precise machine and slowly remove layer by layer the silicon on the top of the chip,” Gauthier said. “Then they can get down to the memory cells without destroying them, and they can go in with a probe and they can actually read out those digits that are stored on the chip. Chip companies now add anti-tamper packaging to thwart this type of attack, such as the security chip used on IronClad, but this adds somewhat to the chip design complexity.”

Instead of storing the private key directly on the drone, Gauthier uses a device called a PUF, or “physically unclonable function,” that generates the private key each time it is requested. On top of that, PUFs are highly sensitive to manufacturing variation, down to the atomic level, so the slight and unavoidable differences in how individual PUFs are manufactured translate to each PUF generating a unique key.

“The factory that's making these chips does their darndest to make the same chip over and over and over again, and yet our technique is so sensitive that very tiny variation that they can't control is enough to give a unique fingerprint for each chip,” Gauthier said. “If you try to probe that by thinning down the chip, you would disturb it enough that you would destroy the ability for the chip to generate anything, so it's essentially a tamper-proof type of device.”

PUF technology is part of a growing trend linking the field of physics with information theory, or the study of methods to manipulate, process or transmit information. At the root of this connection are complex networks, which couple many smaller, independent, somewhat unpredictable components together.

Facebook and Twitter are examples of complex networks, but such networks can exist on much smaller scales, too, including inside a PUF. Instead of individual users whose behaviors coalesce to create a social media platform that generates unique feeds for each individual, in a PUF, tiny manufacturing variations modify the complex network’s output: the private key.

“Physicists such as myself have been studying the general properties of complex networks,” Gauthier said. “This fundamental exploration can help guide new ways to process or manipulate information.”

Gauthier and his colleagues who work on PUFs hold patents on the technology through Ohio State, and Gauthier started his own company, ResCon Technologies, last summer to further develop PUFs. He said he’s at a point in his career where he’s able to focus on transforming some of the research he’s been working on for decades into real-world applications.

“I'm really excited about taking some of these technologies that seem like they're at the right place at the right time and commercializing them,” Gauthier said. “Partnering with Asymmetric has been great; I really started to learn a lot more, and it has helped connect me to the startup ecosystem around Columbus and across the state of Ohio.”