Every year, students from all over the world submit their applications to one of the many graduate programs at Ohio State, with the hopes of being one of the few students accepted. In 2014, Jasmine Whiteside was one of those students.

“The reason I chose to come to Ohio State would be because of its commitment to change,” Whiteside said. “The people, my peers, the upperclassmen … they all have this commitment to see things get better and not be stagnant.”

However, Whiteside’s plans to attend Ohio State and pursue her master’s degree in sociology had to be put on hold. During her senior year of undergraduate studies at the University of Southern Mississippi, Whiteside's demeanor changed. The once outgoing, positive and independent student abruptly canceled plans with friends and became argumentative with professors.

In December 2013, Whiteside’s health had significantly deteriorated, and she was diagnosed with catatonic schizophrenia. Shortly after the new year, her health problems proved to be physiological when she suffered from uncontrollable seizures. She was taken to the University of Mississippi Medical Center, where she was diagnosed with anti-NMDA receptor encephalitis, a disease where antibodies from the body’s immune system attack the proteins in the brain that control electrical impulses.

Whiteside spent seven months in the Medical Intensive Care Unit; six of those months were spent in a coma. Now, more than three years and countless rehab sessions later, Whiteside has completed her first year of graduate studies in sociology — a great feat for anyone, but especially for someone who has overcome an aggressive and rare disease.

“It was definitely challenging, but my first year as a graduate student was really fun, and I never felt that I couldn’t do something.” Whiteside said. “If I had to choose again, I would definitely choose Ohio State.” 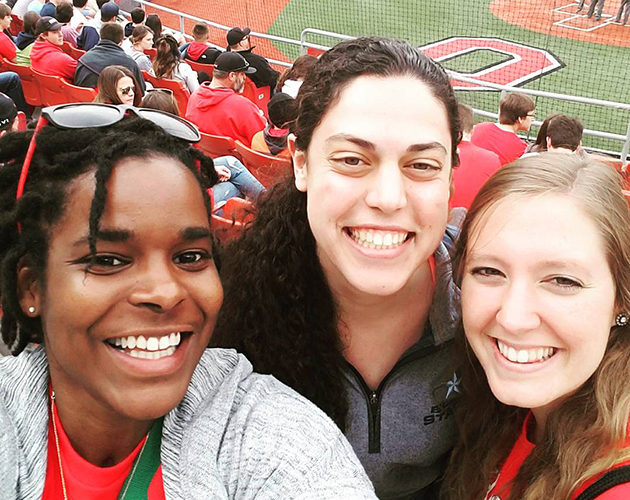 Whiteside has proven herself to be a dedicated and conscientious student. She makes sure to set aside extra time to complete her assignments, due to the memory complications caused by anti-NMDA receptor encephalitis. When moments arise where she feels the pressure of school is too much, she knows that she has the support and guidance of her professors in the Department of Sociology and advisors in the College of Arts and Sciences.

“They’ll definitely work through it with me and help me figure out what to focus on so I don’t stretch myself too thin,” Whiteside said. “I would say that all the professors want their students to succeed and I think that’s been a very good thing for me particularly because it takes me a little bit longer to do the assignments.”

Rachel Dwyer, professor of sociology and the director of graduate studies in the department, has been a mentor to Whiteside since before she stepped foot onto campus.

“After we admitted Jasmine to the graduate program and when we learned about her hospitalization, we worked to help her procure a deferment because she was someone we wanted to invest in,” said Dwyer. “Jasmine has shown time and again that our instincts were correct — she really stands out for her drive and dedication to the field of sociology, which is reflected in her excellent work.”

While Whiteside has encountered her fair share of challenges as a graduate student, the biggest obstacle has been overcoming her self-doubt and learning to believe in herself.

“Everybody has doubt once you get into grad school, but I think that the doubt’s probably twice as much because there’s a whole gap. You’re just going to have to push that doubt behind you and just lean on yourself and what you know you can do and what you know you can learn — and just keep pushing yourself while also depending on those other people to help you out as well. I don’t think I could’ve gotten this far without the support of the Department of Sociology, my roommates, the friends I met the first week here and my friends back at home who knew me before I got sick.”

Dwyer has no doubts that Whiteside will succeed.

“There are these intangibles that you sense about a student. Whiteside is open to new concepts and experiences, and her curiosity and spirit are apparent in her work and class participation. This is a case of academic excellence.”

Whiteside will be the first to admit that her path to graduate school hasn’t been easy, but she encourages others who face challenges to take the step, even if it’s terrifying.

“It’s frustrating, and it’s scary to think maybe you'll never get back to where you were ... but you have to remember that before you were as good as you were, you had to practice and work hard, so I think it’s just learning how to crawl before you can walk, but then you have to do it again. It's a joy when you get to where you’re supposed to be.”

Dwyer has seen many graduate applicants come and go, and she knows that Whiteside is in for the long haul.

“Transition to graduate school is challenging for anyone, but Jasmine has overcome more than most people will ever have to confront. She will make an extraordinary contribution to the field.” 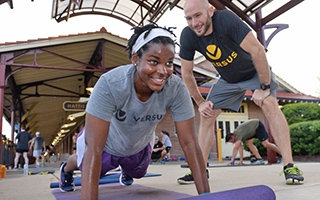