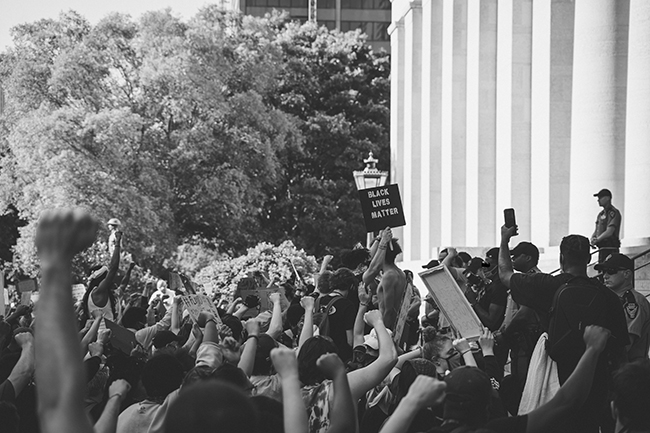 Every day for three weeks after the video of George Floyd’s death went viral, Joshua Edmonds immersed himself in the protests in downtown Columbus.

Some days he was an activist — sharing the pain and pride with those around him and joining the demand to end systemic racism, police brutality and white supremacy.

Other days he was a photographer — capturing glimpses of the raw emotion filling the streets and telling the story of how a city gathered to voice its anguish and outrage.

A selection of his photos is highlighted in the exhibit, “One Voice, One Message: Black Lives Matter,” hosted by the Urban Arts Space’s multi-venue Hybrid Arts Lab in Hopkins Hall Gallery through Oct. 20.

“It’s showing people who came out to express themselves, whether it was anger, sadness, pain,” said Edmonds, visual media specialist for Ohio State’s Office of Diversity and Inclusion. “My photos are fragments of what was happening in Columbus, things I was a part of at that point in time. They’re my truth of what I saw.”

“One Voice, One Message” is one piece of the Hybrid Arts Lab’s broader programming this semester centered around social justice, racial inequities, diversity and self-identity. In September, Hopkins Hall Gallery was home to “Rapid Fire Text,” an improvisational ink workshop and exhibition led by Lori Esposito, a PhD candidate in the Department of Arts Administration, Education and Policy.

The exhibit, which now lives virtually within the Hybrid Arts Lab’s “UAS From Home” venue, was created by students in Esposito’s course, “Visual Culture: Investigating Diversity and Social Justice.” The workshop experiments with fusing written words to expression, empowering the artists to rapidly paint texts at the same pace they think them. 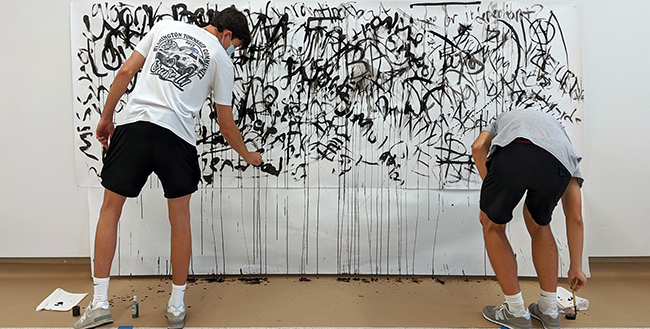 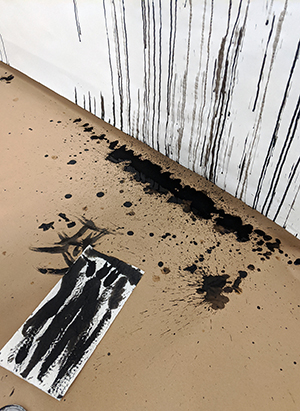 Esposito prompts her students to ponder how they’re feeling in the moment. What are they bottling up? How are they interpreting not only what is happening in their world, but how they feel about it? The activity gives students agency, an opportunity to harness their own sense of self-representation and expression.

“The prompt is asking them to go to a place where in recent months they’ve had an experience that’s changed them,” Esposito said. “Go inward and identify and contemplate a moment that was significant to them. … From that point, I ask them to synchronize their writing tools with their thought processes.”

After the activity, the students stood facing their canvas, now saturated with ink dripping down, their raw thoughts and emotions splashed onto the surface. There was a cathartic openness as they took in and evaluated their own work and that of their peers.

“The inspiration behind this was to get young people in a classroom to sort of open up, to begin that process of collaborating and sharing ideas,” Esposito said. “There was a vulnerability in the classroom, like, ‘Oh, I have to identify myself.’ And that was new to a lot of students.”

Near the end of the semester, Hopkins Hall Gallery will welcome “SURFACE/SKIN/SIGHT: WE ARE ALL FOREIGNERS,” led by assistant professor of art Gina Osterloh. SURFACE/SKIN/SIGHT is a collaborative, experimental effort between student artists activating both digital and analog mediums: photography and sculpture. The exhibition explores how sight and visuality can limit or expand one’s understanding of identity. It asks, “How does skin and the body absorb, reflect and refract the act of looking and pre-conceived notions of race and gender? How is the body a permeable border — just as national borders prove futile in resisting viruses and well as perpetuate false notions of self and other, citizen and foreigner?”

“It is a call and response relationship between the 2D image and 3D sculptural forms, representation and the body,” Osterloh said. “It’s truly an experiment for students to share works in progress and try out ideas, and it’s a space to ask questions.”

“There’s something about the arts that’s conducive to having difficult conversations,” said Merijn van der Heijden, director of Urban Arts Space and Hopkins Hall Gallery. “Artists are always asking and addressing questions, and art wouldn’t exist without that kind of probing nature.”

Van der Heijden said artists are often inspired by what’s happening in the world around them, and they confront complex feelings and thoughts through what they create. Some of the most compelling artists, she says, give audiences a way into difficult and sometimes controversial topics.

“Questions of the time inevitably play into creating,” she said. “Artists are tapping into what’s happening in the world. These conversations artists are having are not happening inside a vacuum.”