Scientists are finding galaxies billions of light years away from Earth, yet there are still discoveries to be made right next door.

In January, data from the Dark Energy Survey — which utilizes an 8,000-pound camera mounted on an equally powerful telescope in the Andes Mountains to see deep into space — revealed 11 previously unknown stellar streams orbiting the Milky Way galaxy.

Stellar streams mostly reside on the outskirts (or “halo”) of the Milky Way, and they represent remnants of dwarf galaxies and star clusters that passed by the galaxy too closely and got torn apart by its gravitational pull. Only about 20 stellar streams had been identified in the Milky Way before this discovery, and locating so many at once is unprecedented, said Annika Peter, faculty member at Ohio State’s Center for Cosmology and Astro Particle Physics (CCAPP), which is a key collaborator in the Dark Energy Survey (DES). 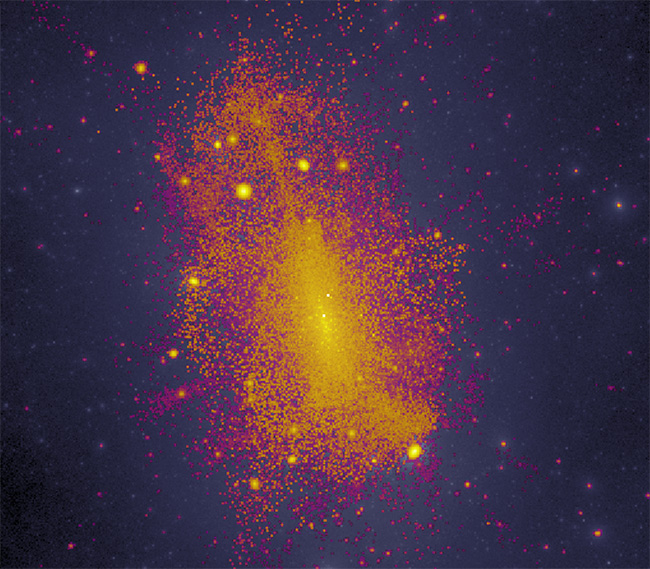 The Milky Way galaxy is surrounded by a halo of stars, as simulated in this image (courtesy Annika Peter, CCAPP)

“The fact that we found so many streams so close together is surprising, and it tells us that, actually, the Milky Way has munched up quite a lot of these little galaxies over time,” said Peter, who is also a professor in the Departments of Astronomy and Physics.

This lends credence to astronomers’ belief that galaxies are formed from small galaxy building blocks over time, said Paul Martini, professor of astronomy and a member of CCAPP. “The stellar streams are relics of some of these building blocks,” and can provide a sort of fossil record for the Milky Way’s evolutionary history, he said.

In addition to clues about where these stars came from, follow-up measurements will help researchers build a better model of the distribution of dark matter in the Milky Way’s halo, Peter said.

“The orbits of these stars are really sensitive to dark matter,” she said, adding that some people are looking for “stream gaps” for evidence of smaller, starless dark matter halos in the Milky Way.

These types of discoveries are made possible with the enormous data sets produced by large-scale astronomical surveys like DES, though it’s “analogous to searching for a needle in a haystack,” Martini said.

Since its launch in 2013, DES has observed approximately one-eighth of the entire visible sky, cataloguing about 400 million stars and galaxies — almost twice the number of objects recorded in the Sloan Digital Sky Survey (SDSS), the largest cosmic survey prior to DES. Though it examines less of the sky than SDSS, DES sees farther or “deeper,” Peter explained.

The primary purpose of DES is to make measurements that allow astronomers to better characterize dark energy — the stuff that makes up the majority of the universe but that scientists still don’t understand.

“It turns out that 70 percent of the universe essentially behaves as if it’s gravitationally repulsive, and that’s the thing that we call dark energy,” Peter said. “It’s basically this catch-all term that sort of characterizes our ignorance.”

Dark energy is what’s causing the accelerating expansion of the universe — a reality that’s thrown astronomers for a loop since it was discovered 20 years ago because it can’t be explained by Einstein’s theory of General Relativity. Dark energy could either fit into or modify general relativity or lead to an entirely different theory of gravity, Peter said.

DES released its first public data earlier this year, which researchers used to identify the new stellar streams by filtering for groups of stars with similar ages, chemical compositions and distances from Earth.

Last summer, DES collaborators released the most accurate map to date of mass distribution in the universe, which comes out to be approximately 4 percent ordinary matter, 27 percent dark matter and 69 percent dark energy.

“What we are releasing now is just the beginning,” said Klaus Honscheid, professor of physics and CCAPP member, adding that DES will release improved results later this year that will “provide further tests of the standard model of cosmology, challenge different theoretical ideas and — as we all hope — provide the first hints about the nature of this mysterious quantity we call dark energy.” 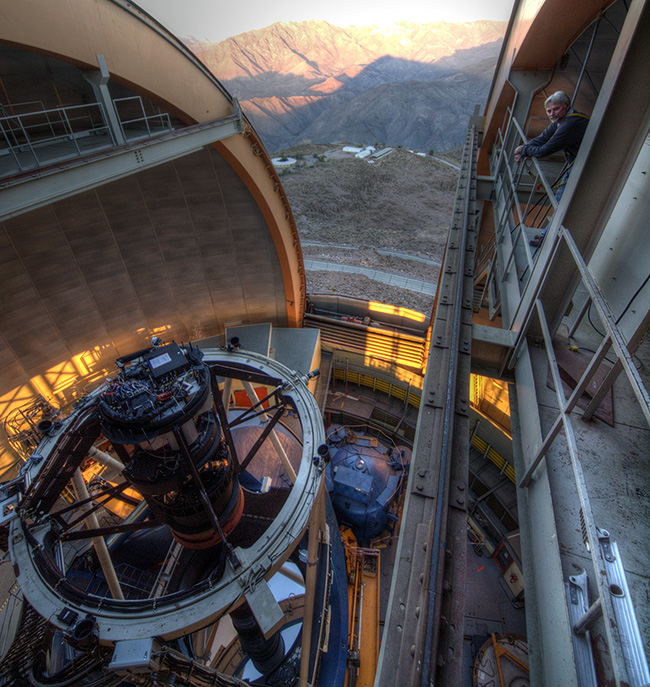 Physics Professor Klaus Honscheid in the dome of the Blanco 4-meter telescope in Chile, where the Dark Energy Camera is mounted (Image courtesy T. Abbott).

After DES, researchers at CCAPP will embark on the Dark Energy Spectroscopic Instrument survey, which will utilize a spectrometer instead of a digital camera.

“The future is really bright for using things like streams to learn a lot about dark matter, galaxies, and dark energy,” Peter said.

The universe is expanding at an accelerating rate and so is our knowledge of it, thanks to researchers at @osuccapp and @theDESurvey. #ASCDaily