Voices of Excellence celebrates one year

In an era when seemingly everyone has a podcast, it takes a unique voice and a unique set of guests to cut through the chatter.

"Voices of Excellence", an Arts and Sciences podcast, has done just that — carving out a niche for experts, thinkers and creators in the College of Arts and Sciences to share their expertise about topics far and wide. This month marks the podcast's one-year anniversary.

“David Staley's quick wit, sense of humor, and deep curiosity about a wide breadth of areas make him the perfect host,” said Janet Box-Steffensmeier, the Vernal G. Riffe Professor in Government and Politics and former interim executive dean of the College of Arts and Sciences.

Staley, associate professor of history, shared his thoughts on "Voices of Excellence" on the occasion of its first anniversary, including the program's origins, unexpected connections and why the show resonates so strongly with its listeners.

"The germ of this idea was to develop a podcast around science, mostly Science Sundays, which I thought was a really good idea. I had been interested in podcasting for some time and talked with the ASC Technology Service's Digital Media Studio manager, Doug Dangler, who was talking with Christopher Haddad, dean of natural and mathematical sciences, about recording a podcast around Science Sundays. I said, 'Yes, but not exclusively to science. I'm a humanist, so could we expand the idea to be a podcast across the Arts and Sciences? The podcast dovetailed perfectly with the communication plan and activities for the launch of the Year of Excellence in the Arts and Sciences in the fall of 2018. I'm especially grateful to Professor Box-Steffensmeier for her support of the podcast."”

"I grew up around radio. My father worked in radio, and I hung around him and always had a fascination with radio — especially interview shows. I was a pretty religious listener to Studs Terkel.

Interviewing was something I wanted to do as a kid, and then I grew up and went to graduate school and sort of forgot about it. So the podcast environment was an opportunity for me to relive that, but expand on it. I intend to be an engaged listener who is eliciting thoughts from my colleagues."

Thoughts on the first year

"Looking back over this year, with the bank of completed interviews, I see themes emerge even across an entity as large as the college: how creative processes differ, how theory and practice intertwine and separate, and how the organization of laboratories changes from area to area."

"After one of our broadcasts on local NPR affiliate WCBE 90.5 FM, I got a text from a high school friend who had heard me on the radio and became a podcast listener, not just because it was his friend’s voice, but because of the subjects and guests. When I'm out and about, giving talks and those sorts of things, people have told me, 'I've listened to the podcast and enjoyed learning about what’s happening at Ohio State.' And that was our hope with the podcast: that it would it would be outreach that would interest people at the university, as well as the community-at-large."

On why the show resonates

"I approach every interview as a curious novice and an engaged listener. Our guests are specialists talking in very accessible terms about their research, passions and interests. These podcasts are intended for a broad audience: It’s an expert describing important work in easy-to-understand language." 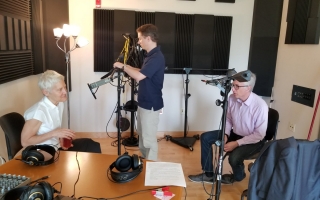