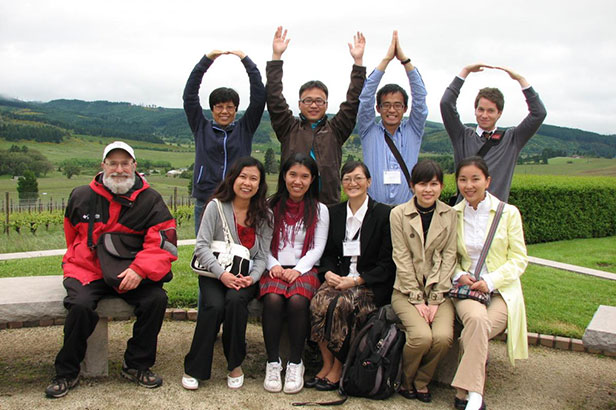 The Ohio State University Department of East Asian Languages and Literatures (DEALL) is one of the largest programs of its kind in the continental United States. It offers undergraduate degrees in Chinese, Japanese, and Korean studies, as well as MA and PhD programs. It is dedicated to advancing knowledge of East Asian languages, literatures, and cultures. Department faculty work spans several areas of inquiry across geographical and cultural regions of East Asia and in various periods in history.

We have comprehensive programs with real depth. Research foci of our faculty range from early text to modern media, from language pedagogy to performance and folklore.

DEALL received an Academic Challenge Grant from the State of Ohio for its innovative program in Japanese Studies. The grant facilitates research activities and provides for adding Japanese specialists in history and literature.

DEALL is leading the way in developing Cantonese language materials. Cantonese, a dialect of Chinese, is spoken by over 50 million people. Thanks to Ohio State, American diplomats and business leaders will be able to be trained in intermediate to advanced-level spoken Cantonese through multi-media materials developed in the Ohio State Cantonese Project, the department’s joint project with the Foreign Language Center.

DEALL has one of the most active and productive groups of faculty in the country in East Asian studies, with the publication of more than books in Chinese, Japanese, and Korean literature, linguistics, and pedagogy; and national and international presentations and performances. The department is the new home of the journal, Modern Chinese Literature and Culture, with Kirk Denton as editor. It is the former site of the Journal of the Chinese Language Teachers Association,  edited by faculty members for nearly 15 years.

Faculty have organized  workshops, symposia, and conferences over the years. They have received research grants from such organizations and agencies as the American Council of Learned Societies, the National Endowment for the Humanities, the National Endowment for the Arts, the Ohio Humanities Council, and the Social Science Research Council. Several faculty have received Japan Foundation and Fulbright-Hays fellowships, as well as a grant from the Chiang Ching-kuo (CCK) Foundation.

Faculty are engaged in consultation with business and industry and evaluation of programs at other universities. Consultations with businesses include the teaching of Japanese or Chinese to employees of Battelle, Borg-Warner, and Honda. Faculty have evaluated programs at Bryn Mawr, Wittenberg, Berkeley, and Connecticut College, among others.

Programs offer one of the most extensive and diverse curricula in the country. Individualized programs are offered, as well as an intensive track summer language immersion program in Chinese and Japanese.

Program offers MA and PhD degrees in Chinese and Japanese in literature, linguistics, and language pedagogy. Teacher-training programs in Japanese and Chinese are offered in summer.

Ohio State has an active exchange agreement with several universities in China, the most important being the Beijing Language and Cultural University and Shandong Province’s Qingdao Haiyang University.

The program has a graduate student population that ranges between seventy and eighty students, making the program one of the largest in the continental United States. Graduate students can pursue both the MA and PhD in Chinese or Japanese, focusing on literature, linguistics, or language pedagogy as a field of specialization. (MA, PhD)