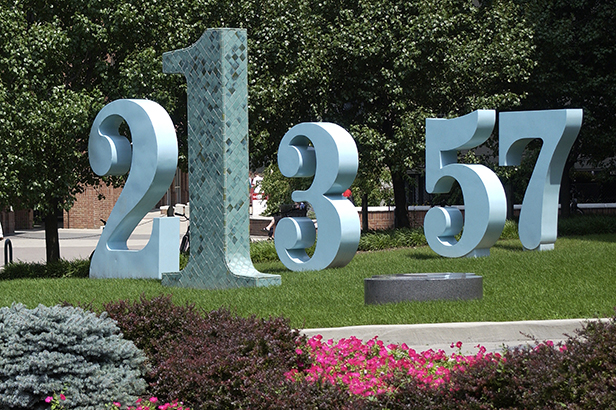 The Ohio State University Department of Mathematics offers students tools for understanding our world and trying to solve its problems. More than ever, mathematicians have an opportunity to make a lasting contribution to society by helping to solve problems in such diverse fields as medicine, management, economics, government, computer science, physics, psychology, engineering and social science.

PhD, Mathematics
MMS, a masters degree with specializations in:

For the last seven years, the Alfred Sloan Fellowship—one of the most prestigious awards given to the country’s outstanding young scientists and mathematicians—has been awarded to faculty members in the Department of Mathematics. The latest recipient, mathematician Matthew Kahle, is an upcoming leader in the new field of random topology. Kahle joins an elite group of Sloan Fellows from the department: Roman Holowinsky (2011), Janet Best (2010), Chiu-Yen Kao (2009) and Jean-Francois Lafont (2008).

Professor of mathematics, was selected to receive the 2012 SIAM Prize for Distinguished Service to the Profession. Keyfitz took office as the first woman president of SIAM’s international counterpart, the International Council for Industrial and Applied Mathematician (ICIAM), in October 2011. This award is given annually to a mathematician who has made significant contributions to further applied mathematics on the national level.

Established in 1990, the mission of the MRI is to enhance the ability of Ohio State mathematics faculty members and students to engage in collaborative work in mathematical research worldwide.

The MRI provides financial support for speakers in the research seminars; sponsors and co-sponsors conferences workshops and targeted research programs; assists short and long term visitors involved in collaborative research; supports the department distinguished lecture and visitors series; and, encourages the dissemination of the mathematical research.

An intensive six-week summer experience designed to encourage motivated pre-college students to explore mathematics. The central goal of the Ross Program is to instruct bright young students in the art of mathematical thinking and to inspire them to discover for themselves that abstract ideas are valuable and important.

Students who have never asked why things work the way they do are not prepared to lead the way to future scientific innovation. It is precisely this independence of thought and critical questioning that the Ross Program strives to nurture.

The minor in computer and information science (CIS) consists of a minimum of 13 credit hours. The courses are in three categories: Programming Fundamentals, CIS Core, and Technical Electives. Three different tracks, A, B, and C, are available for the fundamentals portion. (CPTRINF-MN)

The minor in computational science consists of 18 credit hours of course work: A simulation and modeling course, either CSE 1221 or 2221, a numerical methods course, a capstone research or internship using an approved departmental research course designation, one discipline specific computational modeling course and one elective.

The Department of Mathematics offers programs of study that lead both to PhD and MMS degrees. The graduate curriculum includes courses starting at the preparatory master's level leading up to advanced research topics courses in all major areas of mathematics. Students can pursue a master’s degree in Mathematical Biology or Mathematics for Educators. (MMS, PhD)