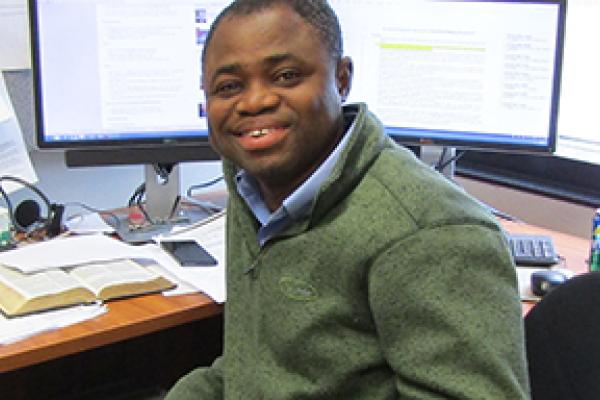 Chemistry and Biochemistry Assistant Professor Abraham K. Badu‐Tawiah’s Early Career Award from the Department of Energy’s Office of Science puts him in an elite group of the nation’s top young energy researchers — from both universities and DOE National Labs.

Initiated in 2011, this program supports exceptional researchers during their early, formative career years, when many do their most innovative work. Research topics must fall within one of these six major program offices:

This year, 49 scientists were chosen from a large pool of university and DOE-Labs-based applicants. Badu was one of just 27 university researchers.

Selection was based on peer review by outside scientific experts. Badu’s research focuses on developing new mass spectrometry (MS) tools for use by non-experts. His proposal, “Visible Light Photo‐Catalysis in Charged Micro‐Droplets,” was selected by the Office of Basic Energy Sciences.

The five-year grant of $150,000 per year helps Badu’s lab increase its focus on tackling the world’s critical energy problems.

“Everyone is interested in the idea of solving our energy problem by using light from the sun to make chemical compounds for fuels. But many chemical compounds don’t absorb light directly,” Badu explained, “so you need to find a compound to act as a catalyst to transfer the energy. It has not been that easy to do.

“Specifically, the grant will help us develop catalytic screening platforms that can be used by chemists to facilitate what has until now been a process similar to cooking: First you do the reactions, wait, then do a sample that you must analyze; chances are you will need to go back and make changes — then start over again. It’s a long, painful process.”

Badu’s group is able to fast-track this arduous process significantly with the help of a laser source coupled with a novel, contained electrospray ionization mass spectrometry technique for direct and rapid screening of reaction conditions in ambient air.

“Using mass spectrometry allows you to monitor reactions in real-time,” Badu explains. “We use pico-mole quantities, even smaller than nano-scale, possible only because we’re using droplets. This is a great advantage — if you can shrink these down, you can increase the speed of the reaction.

“In other words, you can do in seconds what typically takes a day. The key component is that you don’t have to wait; you can make immediate changes.

“The ionic environment of the charged droplets exists at the interface of the solution and gas phases, yielding information directly transferrable to large-scale chemical synthesis,” Badu explains.

“Our lab is unique — studying photochemical reactions under the confined environment of micro-droplets capable of accelerating chemical reactions using only pico moles of reactants gives us an advantage; it is difficult to find a catalyst, so you need to have a lot of them to work with.

“We believe the effect of electric fields used during charged droplet generation, along with the effect of concentration achieved by solvent evaporation from the resultant charged droplet and the effect of droplet exposure to a highly intense and coherent laser source will enable production of unique, reactive photo-chemical species for novel pathways that might be difficult to access in traditional bulk, condensed-phase conditions.”

Badu‐Tawiah hopes that five years from now, “We will be able to facilitate the discovery of new catalysts that best absorb light and be able to decide on what reaction the selected catalyst is good at without wasting resources.

“Our greatest hope is to come up with a physical device that we can make available to other labs. The goal is to make it user-friendly, easy to use successfully without too much training.”

Badu-Tawiah, who came to Ohio State in July 2014, confesses that he had not really considered Ohio State until he came for a visit. He sums up his change-of-heart in one word: mentoring.

“There is such a welcoming atmosphere here and everyone embraces the idea that mentoring is key to the success of junior faculty. I realize that mentoring and networking have a huge influence on your career. When I compared Ohio State with other places … my choice was made.”

Badu-Tawiah received a BS and MS from Kwame Nkrumah University of Science and Technology in Kumasi, Ghana; an MS in chemistry from Indiana University of Pennsylvania; and a PhD in chemistry from Purdue University, where he was awarded Andrews (2007-2009), Bilsland Dissertation (2011) and Lilly Innovative (2012) Fellowships. From 2012 to 2014, he was a postdoctoral fellow at Harvard University.