Alumna Lindy Goldstein (BA, BFA, 2000) helped bring a dose of holiday magic to the movies this season. The dance and English graduate is the executive producer of Disney’s "The Nutcracker and the Four Realms," which stars Helen Mirren, Keira Knightley, Morgan Freeman, Misty Copeland and Mackenzie Foy.

But before she was walking red carpets, Goldstein was a busy double major at Ohio State, spending her days on campus buried in books and rehearsing at Sullivant Hall.

“I would study and create 25 hours a day, eight days a week,” Goldstein said of her time at Ohio State. “But I loved every second of it.”

A lifelong dancer, Goldstein was drawn to Ohio State for its top-rated dance program, as well as the sense of community she felt from the moment she auditioned.

“Right after my audition, I remember thinking, ‘Yes! These are my people,’” Goldstein recalled.

“It was also incredibly inspiring to be in a conservatory like Ohio State’s amazing dance department, within the framework of a large university, with all of the opportunities and resources a large university provides,” she said.

Telling stories on stage and screen

After graduation, Goldstein moved to Los Angeles because she was interested in making dance accessible to a larger audience. She began her career as a dancer and choreographer, and her award-winning choreography has been performed across the United States and honored by both the National Foundation for Advancement in The Arts and the acclaimed dance center Jacob’s Pillow.

“I fell in love with storytelling through film and television, working with writers and directors, artists of all kinds, and actors,” Goldstein explained. “In many ways, it was just a different version of choreographing a show.”

Goldstein got her start in the entertainment business by working at a major talent agency before moving to the production side, where she learned “the nuts and bolts of moviemaking.”

Goldstein knew she wanted to start her own production company someday, but it wasn’t until she spoke with Laura Ziskin, a producer known for "Lee Daniels’ The Butler" and "Spider-Man," that she felt ready to strike out on her own.

“She told me I needed to bet on myself, take a leap of faith, and see if I could make it work,” Goldstein said.

Since its inception in 2013, Goldstein’s production company has worked on projects for Walt Disney Pictures, ABC, Freeform, ABC Studios, Amazon Studios and Sony.

“It was terrifying at the time, but now my company is busy and growing and ready to grow more,” she said.

Goldstein’s dance education at Ohio State prepared her to work with some of the best artists in the industry, particularly when executive producing "The Nutcracker and the Four Realms."

“It is wonderful to be able to talk about Labanotation with Misty Copeland and our brilliant choreographer Liam Scarlett. [Department of Dance professor] David Covey’s light design classes helped me appreciate the work of our Oscar-winning cinematographer Linus Sandgren and gave me a sense of why he was picking certain lights,” Goldstein explained. “Music for dance classes and working with the accompanists gave me the appreciation of the way James Newton-Howard varied the themes of the Tchaikovsky score and created his own rich elements on a much higher level.”

Offering a twist on the well-known holiday tale, "The Nutcracker and the Four Realms" follows Clara, a young girl who must adventure through four mystical realms to find a gift from her late mother. Along the way, she meets the leaders of the realms, including the Sugar Plum Fairy (Knightley) and Mother Ginger (Mirren), and finds that not everything is as it seems.

Goldstein said it was important to the filmmakers to portray Clara as smart and capable.

“Depicting a very intelligent young woman who is the hero of her own story was important to us,” Goldstein said.

“If you can see it, you can be it. We want people to know they can be anything they want to be.”

The Nutcracker and the Four Realms is a film that is exceptionally close to Goldstein’s heart, due, in part, to her passion for dance.

“It was a dream come true to be able to take one of the very first ballets I’d ever seen, and be part of bringing it to the screen” she said. 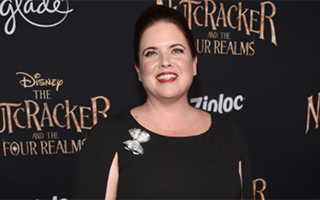