Ann Hamilton reflects on shifts in perceptions and creation myths 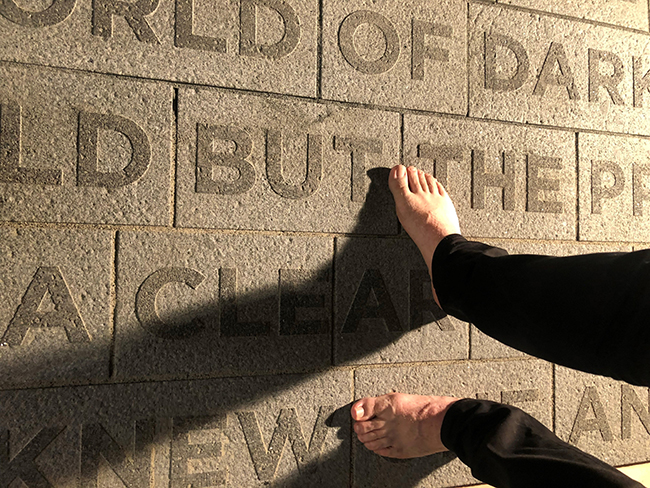 Like everyone — the daily news of the spreading virus, invisible to the eye but manifesting with heartbreak in bodies across the globe, the conditions of social distancing, the recent storms with nights of thunder and lightning, even the lone, long call of the cardinal signaling for a mate — collectively work to make a different lens on everything — no less so on work in the studio. The view out my window is the same but what I see is different.

This shift in perception — immediate but also in some ways subtle — is especially true of the public art project I have been focused on over the last several months, a stone pavement for a public corridor linking the Mayo Clinic to downtown Rochester, Minnesota. A cousin to an earlier project, “VERSE,” in the Thompson Library Buckeye Reading Room, the current project is also a text in relief letters, and like “VERSE,” it weaves multiple sources according to a central spine of keywords. After almost a year of research and much circling, I settled on working with creation myths of diverse origin and time periods. Off the bookshelf came Joseph Campbell’s book series The Masks of God, and in those books I found marginalia from my reading — now over 40 years ago, much of it forgotten — until now. And on the shelves in Thompson Library I found many collections, translations, histories and commentaries to draw upon.

Myths are stories. In the words of Marina Warner, “The word ‘story’ comes from the Greek istoria, inquiry. … Myths are indeed stories that inquire into everyday realities, projected onto an eternal and supernatural horizon.” … “Myths form a deep substratum to knowledge held in common, often so deep as to be forgotten.”

From a prescientific age, creation myths explain how the world was formed, the beginning of consciousness, where people came from. They describe relations between water and earth, people and animals, the essential struggle between order and chaos, form and formlessness — relations and forces not so foreign to the studio, though obviously at a different scale. Creation myths tell of times when there was harmony and times when the Gods, displeased with humans and their care of the Earth, sent floods and pestilence. My time has been spent reading — charting the similarities across stories, finding contemporary resonances in these ancient accountings. Every religion and culture have their origin stores — just as every story has its first sentence. In the beginning there was ……. and its hundred plus variations.

One of the texts that has especially moved me is this Maori ritual creation chant from David Lemming’s book Creation Myths of the World, An Encyclopedia quoted below:

The Maori creation myth is a metaphor
for all types of creation, whether human
or cosmic. It is for this reason that the
ritual words by which Io made the world
are still used today to help in the conception
of a child, in the composition of a
poem, or in the renewal of a broken mind
or spirit.
The following is an example of a
Maori ritual creation chant:

From the conception the increase,
From the increase the thought,
From the thought the remembrance,
From the remembrance the
consciousness,
From the consciousness the desire.
The world became fruitful;
It dwelt with the feeble glimmering;
It brought forth night:
The great night, the long night,
The lowest night, the loftiest night.
The thick night, to be felt,
The night to be touched,
The night not to be seen,
The night of death.
From the nothing the begetting,
From the nothing the increase,
From the nothing the abundance,
The power of increasing
The living breath:
It dwelt with the empty space,
And produced the atmosphere which
is above us,
The atmosphere which floats above
the earth;
The great firmament above us dwelt
with the early dawn,
And the moon sprung forth;
The atmosphere above us dwelt with
the heat,
And thence proceeded the sun;
They were thrown up above,
As the chief eyes of Heaven:
Then the Heavens became light,
The early dawn, the early day,
The mid-day.
The blaze of day from the sky" 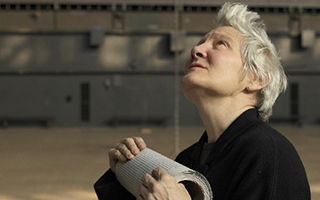