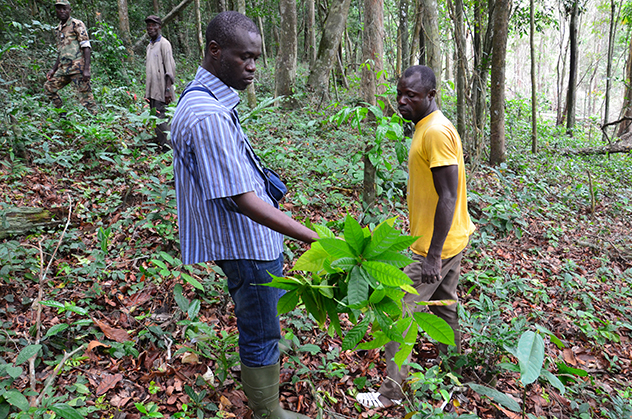 The Ohio State University Department of Anthropology offers educational and research opportunities through teaching and other activities in physical or biological anthropology, archaeology and cultural anthropology. Our empirical and scientific orientation emphasizes teaching and research in evolution, ecology, diet, adaptation and health in past and living societies.

Faculty and student research is conducted around the world, from Medieval Tuscany to Fiji and from the African pastoral systems of Cameroon to the earliest city in the world at Catalhoyuk, Turkey.

W. Scott McGraw, professor and director of the Taϊ Monkey Project, in Ivory Coast, Africa, is co-author of a new study finding that endangered primates in national parks and forest reserves of Ivory Coast — the largest producer of cocoa beans — are facing extinction because of illegal cocoa farms. Thirteen of the protected areas studied have lost their entire primate populations, while another five had lost half of their species.

THE DEPARTMENT HAS INTERNATIONALLY RECOGNIZED EXPERTS IN EVOLUTION, ECOLOGY AND ENVIRONMENTAL IMPACT ON PAST AND LIVING PRIMATES AND HUMANS.

Faculty and their students conduct research around the nation and across the world on the ecology of infectious diseases, primate behavior, the origins of agriculture, forensic identification and much more — anthropology is a global discipline. 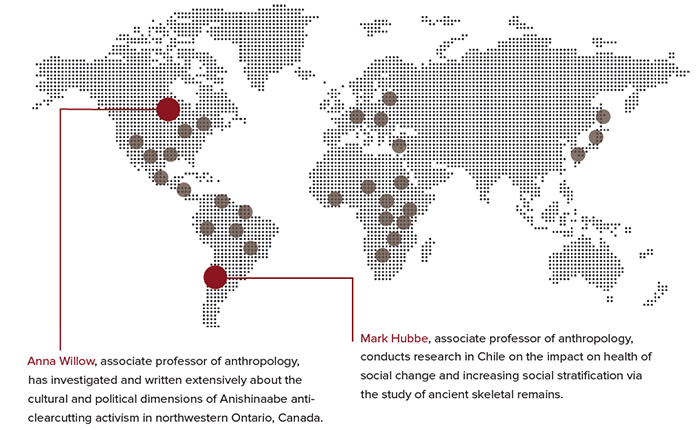 Course work for the certificate emphasizes how anthropological theories and methods are critical to tackling pressing 21st century health challenges and asks students to confront the complex ways in which social, political, and economic forces shape health, influence how people experience illness, and guide how healthcare services are provided.

The minor in Forensic Science emphasizes the broad interdisciplinary nature of the field, giving students an understanding of the basic issues and applications with regards to the law. (FORSCI-MN)

The 16-credit hour Forensic Anthropology Certificate introduces students to the methods, practices, and ethical considerations surrounding osteological and bioarchaeo logical analyses as they pertain to forensic enquiry. Emphasis is on a hands-on approach to the field, with core classes structured around applied teaching with real human remains, and a replica excavation.

Explore the ways that food shapes our interactions with one another, within and across cultures, throughout history and into the present. By focusing on the cultural significance, history and social meanings of food, this certificate allows students to develop a dynamic framework for understanding the place of food in societies from a variety of perspectives.

Classics is the study of the cultures of the ancient Greeks and Romans and the people they directly affected. Its major subfields include the Greek and Latin languages from the earliest records until the Middle Ages; the literary and philosophical works composed in these languages; Greek and Roman art, architecture, science and technology; and more. (CLASGRK-MN)

American Indian Studies is an interdisciplinary field of study that focuses on the histories, experiences, languages, arts, and cultures of peoples indigenous to the lands that now comprise the United States. It seeks to broaden understanding of and make connections between Native peoples and cultures in the U.S. and Indigenous peoples across the Americas and around the globe. (AMINSTD-MN)

Nationally and internally recognized graduate program in scientific anthropology with strengths in evolution, ecology, and environmental impacts on past and living primates and humans. MA and PhD programs are in Archaeology, Cultural Anthropology, and Biological Anthropology. (MA, PhD)